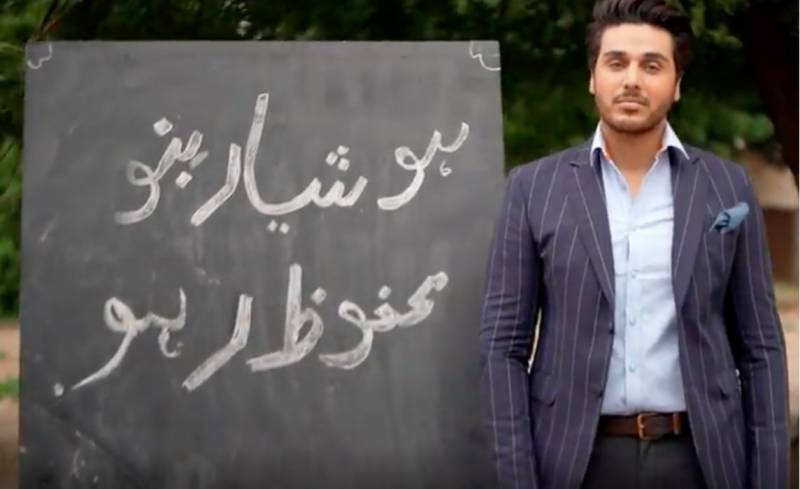 In a country torn by rising child molestation cases, inculcating awareness on child rights and abuse appears critical. Renowned celebrity, actor and popular talk show host, Ahsan Khan, as the Goodwill Ambassador for Rights of Child, has collaborated with the National Commission on the Rights of Child (NCRC) and Huqooq e Pakistan, an EU funded project, to raise Public Awareness Campaign on Child Rights.

The NCRC has produced three feature films for this on-going campaign starring Ahsan Khan as the spokesperson. It’s due to be known that Khan has worked on these films pro-bono. The campaign itself is highly informative, addressing pertinent questions on the prevention of child sexual abuse, molestation, and the importance of differentiating between ‘good’ and ‘bad’ touch. The content in the campaign films is directed towards children, parents, and caregivers. These films will be screened in schools and other societal forums and are currently aired on digital media platforms to amplify awareness. 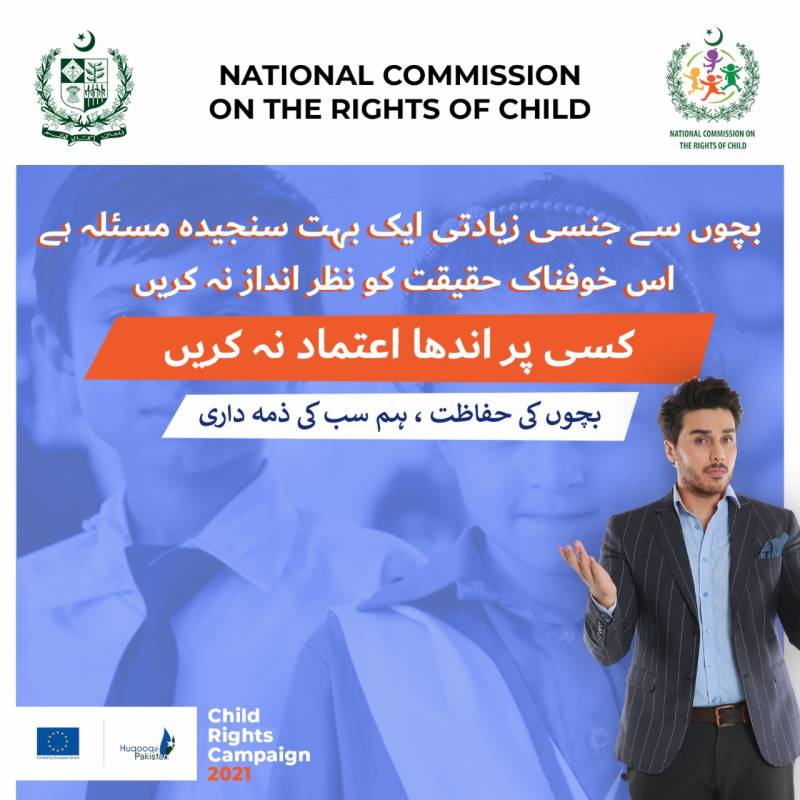 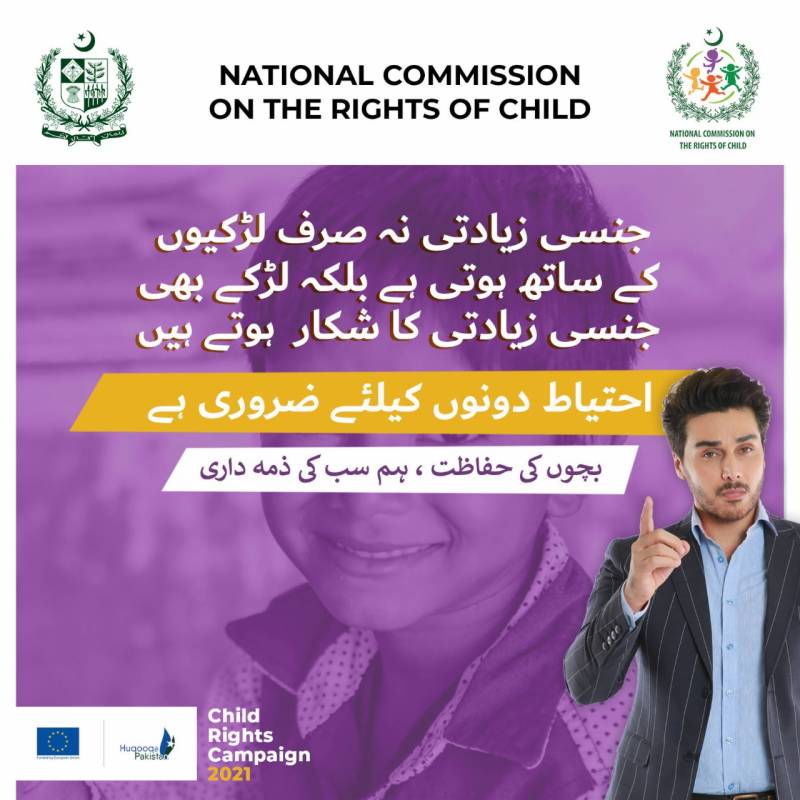 Through these short films, Khan explains what a good touch and a bad touch is to children and how they should react, should they find themselves in such situations. He requests them to be vigilant and hence, remain safe: “Hushyar Raho, Mehfooz Raho”. A powerful advocate for child rights, Ahsan Khan has also worked in the drama ‘Udaari’ aimed at creating awareness on child molestation.

In the second film by the NCRC, Ahsan Khan talks to adults about parental responsibility and communicating with children to build responsive, protective societies for children to thrive in. He asks parents to notice when there is a change in the child’s behavior, build a relationship of trust with the children and to have open discussions about abuse and exploitation. 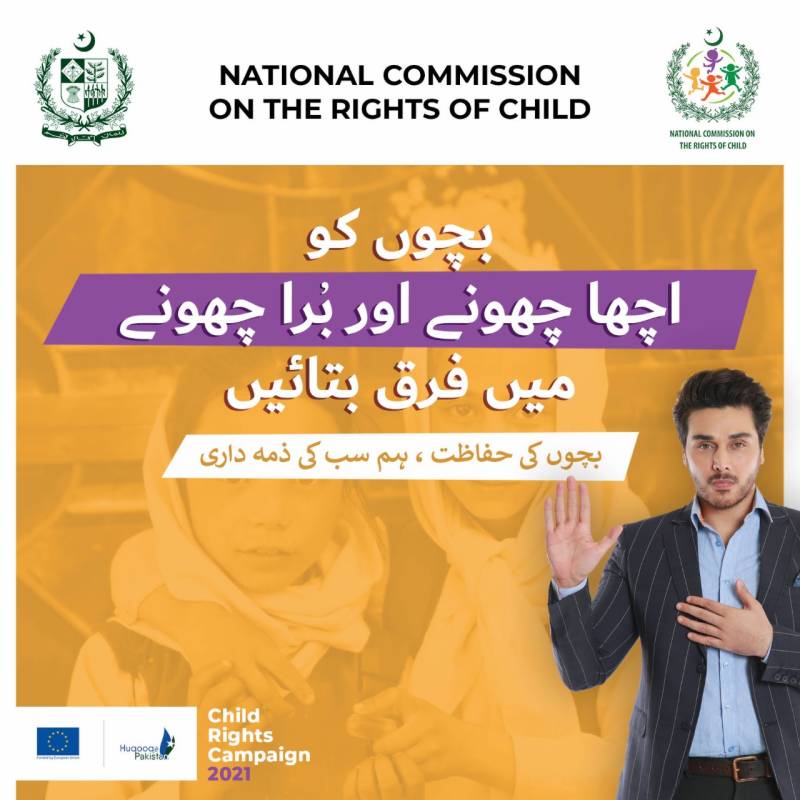 NCRC Goodwill Ambassador Ahsan Khan remarked: ‘Child abuse is one of the biggest challenges faced by our society and it is the responsibility of every citizen to participate in this campaign by spreading the message through social media platforms.’ He added, ‘I hope this campaign will help in educating the public on child protection.’

Chairperson NCRC, Ms Afshan Tehseen stressed on NCRC’s priorities in the fulfilment of child rights, she mentioned, “Child protection is the key priority of NCRC. It is important that we advocate and raise awareness against child abuse and keep educating our public on protective measures.” She further stated, “Through this campaign, we hope to create awareness and prevent abuse, exploitation and violence against children.” 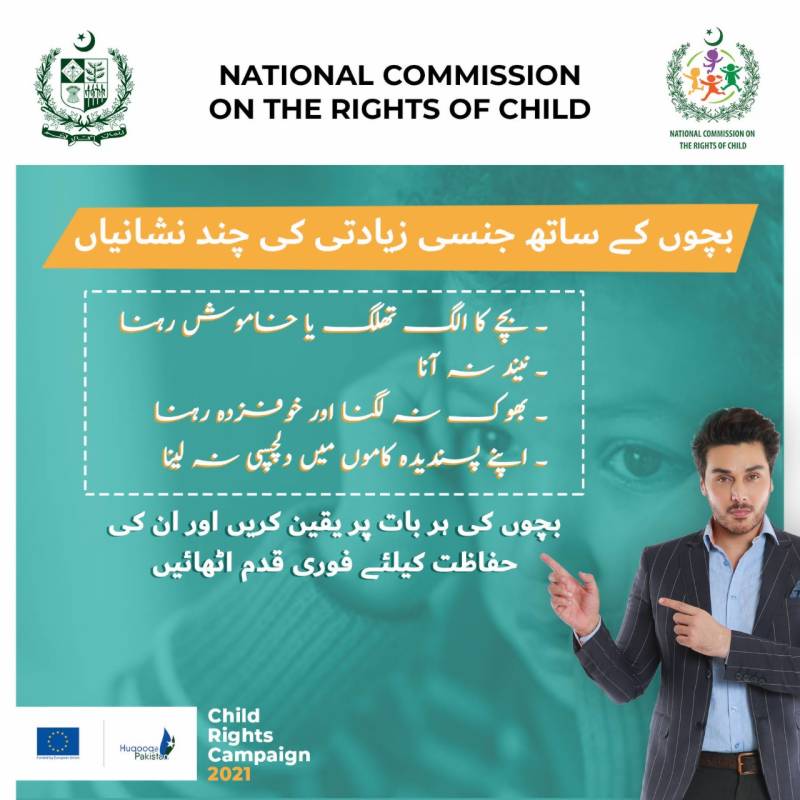 On the campaign launch, Seema Jaffer, Executive Director and Senior Key Expert Human Rights and Communications, Huqooq e Pakistan said: “This campaign is an important step towards raising awareness on prevention of child sexual abuse with the aim to lead to greater protection for the rights of children in Pakistan. "