It is inspiring to witness people following their dream careers. Seldom do we hear of a young boy chasing the goals and dreams that he set when he was just a few years old. However, this is not the case for Ahsan Khan, he pursues his dream and shares his love and journey for what he does with us!

How do you feel when you think about the first role you ever played?

It was a PTV drama directed by Sangeeta and Saeed Noor; I was 19 years old and didn’t even know where I was going. I just knew that I wanted to act and thought that this opportunity was a dream come true for me. Thinking back to that time, I believe I was very young and inexperienced then; but my excitement level was really high. In those days, actors did not have as much exposure as they do now and didn’t have easy access to resources. So, I went into it without observing other actors. I think I was over excited and a bit uncomfortable at the same time, but from that point, I have evolved and learned a lot. I believe that “practice makes perfect” is true for actors – experience teaches a lot. Now, I think that my acting in my first drama maybe wasn’t up to the mark and considering where I am today, I wouldn’t make some of the choices I did then. 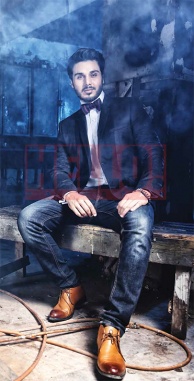 Was acting always the dream? How did you get into it?

Acting has been my dream since I was a little boy and even after I grew up. There weren’t a lot of people in my family who were supportive of my acting. They found it strange that someone could pursue acting as a career, but I was always adamant. When I was younger, we lived in London; I was visiting Pakistan and went to Evernew Studios with a friend of mine to watch the shooting of a film, starring Shaan and Reema. People kept coming up to me, asking if I would like to act. I had never in my wildest dreams imagined that I would get an opportunity like this, so I jumped on the first chance I got because I thought a similar opportunity wouldn’t come my way again. 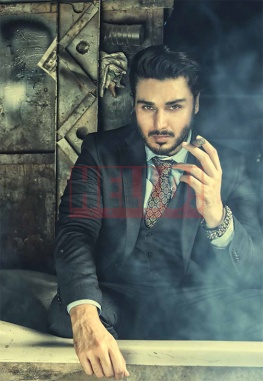 Which drama/film do you think has been life-changing for you? Why?

Throughout my acting career, I have worked in a lot of good plays with the biggest directors and producers – I have acted in plays by Mehreen Jabbar, Sakina Samo, Ayub Khawar and many others. I believe that my journey has been gradual and I have been consistent throughout with a few gaps – the three years I was in London. Rather than having just one hit play that makes one famous, I have been cast for being a good actor instead of just a good looking face and that has enabled me to make a mark.

Which role do you believe has been the most challenging for you during your acting career? Why?

I think that in Pakistan, we don’t have the kind of out-of-the-box, extraordinary roles that truly challenge an actor. I have played numerous characters from grey, psychotic and heroic to negative and angry. One of my favourite characters is of the sikh guy I played in Muthi Bhar Chawal (a play derived from Rajinder Singh Bedi’s novel, ‘Ek Chadar Maili Si’); I spoke Punjabi for this character and I think it was a very good one. A few other favourite characters I played include my role in Dastaan and Sarmad Sultan Khoosat’s Pani Jaisa Piyar, in which I played the villain. Another favourite of mine is a commercial with Amna Khan in which I played four different characters in the same ad. Another ad I really like is where I stand in front of a mirror and my face keeps transforming.

While these are my favourites so far, I’m still looking for that crazy character that will actually challenge me as an actor.

Are you picky about choosing a role you’re offered to play?

I’m very picky about the roles I play. Until a few years ago, I wasn’t so picky, but now I have come to a point where I feel that there shouldn’t be any monotony, so I have become picky. While you age as an actor, you keep evolving and gaining experience along the way, which should reflect in your work as well. In my mind, monotony is death for an actor – if an actor has to do the same kind of work every time, then why not do a 9-5 job.

In a recent article, you have been categorised as one of the most handsome men in Pakistan and you have also been termed one of the best male criers in the industry. How do you feel about that?

It’s really nice to be on the list. As an actor, people give one a lot of attention when it comes to these aspects, I think. In my mind, the crown for an actor comes from acting skill – I would rather be the best actor than the most handsome person. In our entertainment industry, people are focusing a lot on enhancements to their faces and figures, but it’s the acting skill that actually matters. I’m really happy with where I’ve come – I recently won the Best Actor Award at the Hum TV Awards and the Best Producer Award at the Lux Style Awards. I recently acted in the serial, Marasim in which I was a terminally ill patient. People liked my acting a lot in that play and it got really good rankings in the polls. The title of the best crier also comes from my role in this play.

What inspires you as an actor?

I think that people focus a lot on outward appeal and glamour. Real, ordinary people inspire me – everyone is a character in themselves. It is my strong belief that negativity doesn’t come to people naturally, but builds up over time. I get my inspiration by observing ordinary people and learning from them. Other than that, I watch international films and draw my inspiration from old Pakistani dramas – Uzma Gillani, Saba Hameed, Bushra Ansari, Firdous Jamal, Zia Mohiyuddin, Moin Khan and Talat Hussain are a few actors that really inspire me. Anwar Maqsood is someone who greatly inspires me with his intellect.

Which projects are you currently working on?

I’m currently working on a play, starring alongside Ayesha Khan, directed by Sakina Samo. It’s for Hum TV. I think they have made their mark when it comes to making great plays and I love working with them. Every Ramadan, I host a show on Hum TV. It’s not entirely a religious show, but highlights the elements of Islam. The social welfare aspect of Islam that this show highlights, is my motivation behind doing it – it’s modern people speaking about Islam and it portrays a different side of the religion instead of the typical image. Last year, during my shows, there was a little girl who used to come with her mother. She needed a liver transplant, which was to cost one crore Rupees. I appealed on the show for donations and people donated money for her; she went to India for her surgery and is happy and healthy now. I believe that these are the little things that matter in life and that motivates me to be part of the show. I’m also looking at four projects in India; out of these, there are two that I really like. Even if they’re small-budget projects and are acting-oriented, I’ll work on them.

Your all time favourite film (s)?

The Curious Case of Benjamin Button, The Rite (Anthony Hopkins is my one of my favourite actors – I love the last few scenes and have watched them numerous times)

Three of your favourite plays to date? Why?

Muthi Bhar Chawal, Dastaan and Neeyat (I really like my character in it)

The Kite Runner – I love it and have read it twice

I love lazing around at home and spending time with family; I watch films, go to the cinema and the beach with my kids!

Did you enjoy reading this feature? Leave your feedback in the comments below!

July 2019 Is Officially The Hottest Month Ever Recorded

2019 Was Second Hottest Year On Record