Pakistan To Send Its First Citizen To Space by 2022

Minister for Science and Technology Fawad Chaudhry, announced via his Twitter that the selection process to send Pakistan’s first citizen to space will begin in February 2020. 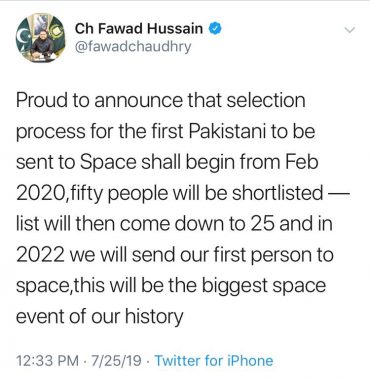 Initially fifty people will be shortlisted and then the list of prospective astronauts will further come down to 25 individuals. Fawad Chaudhry also said that this would be the biggest space event in the history of Pakistan. China, the United States, and Russia are the only other countries to have sent missions to the moon.

Until now, Pakistan has launched two satellites into orbit with the help of Chinese launch vehicle. One of the satellites launched from China is supposed to be a dual-purpose Earth observational and optical satellite. The second one in intended to enhance satellite manufacture abilities in the country.