MAN ON A MISSION - ZULFI BUKHARI - A BUSINESSMAN, A PRODUCER AND A POLITICIAN - THE RISING VIRTUOSO 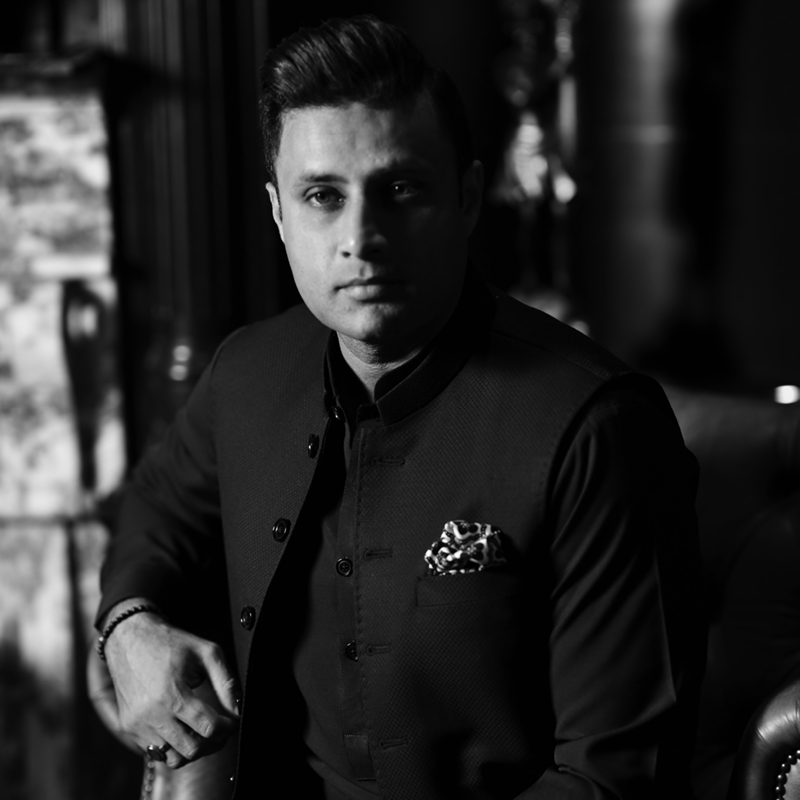 The man of the moment and our cover star for December 2020, Zulfi Bukhari speaks exclusively to HELLO!

What piqued your interest in politics?

Without a doubt the Prime Minister. I was always involved in politics along with my family in some way or the other in both Pakistan and abroad but like so many other overseas Pakistanis my inspiration to join was PM Khan. 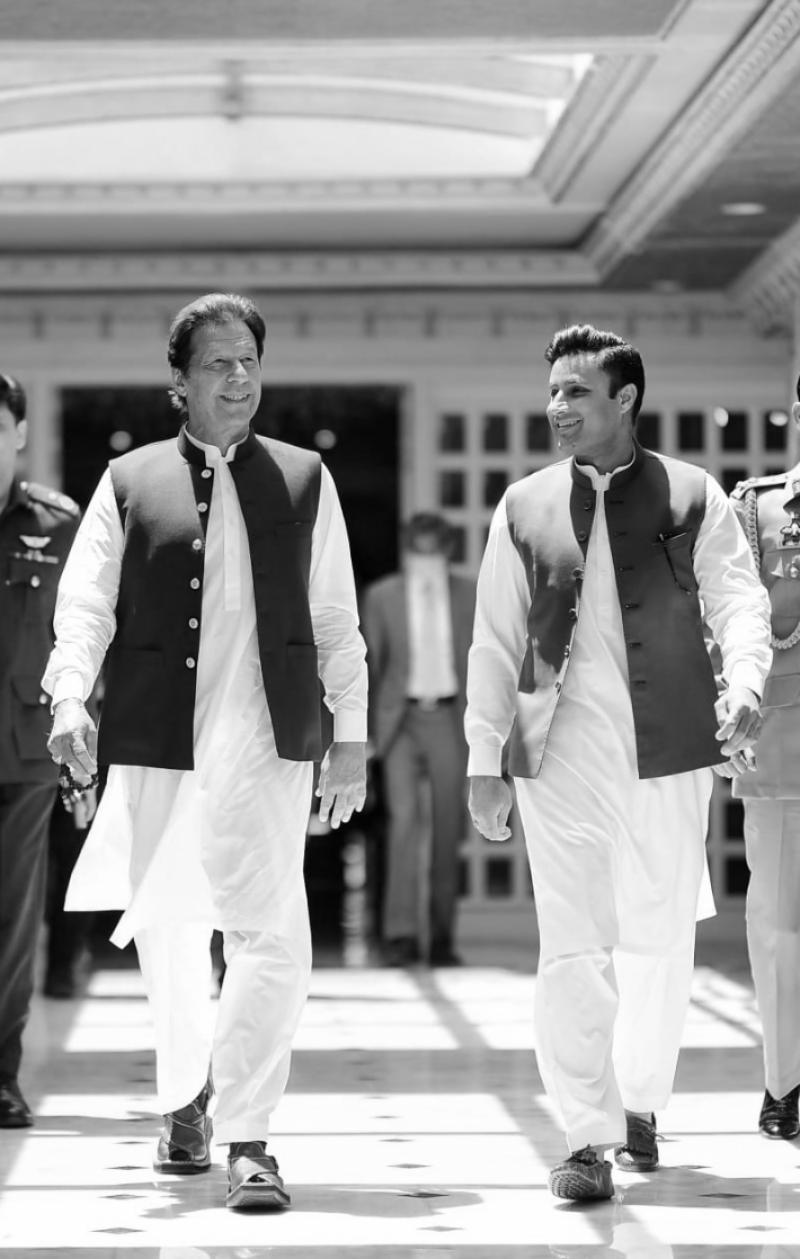 What do you think your biggest achievement as Special Assistant to the PM is to date and what do you hope to achieve by the end of your tenure?

Well the biggest achievement is probably surviving the onslaught of our irresponsible media.

Apart from that it has to awareness,  by bringing a ministry people weren’t even aware existed, into the limelight. Part of it is creating jobs abroad for about a million Pakistanis in space of just 18 months before COVID hit us, getting 8700 Pakistani prisoners released from many different jails around the world and basically giving overseas Pakistanis a form of connectivity back to their homeland has been a big achievement.

By the end of it I hope that whoever takes over this ministry after me finds proper  systems in place.  Proper mechanisms not just for the labour that goes out of Pakistan for work but also for each and every single person of the 10 million diaspora so they have a sense of belonging and connectivity to Pakistan. Whoever comes in will find that the departments are running like institutions so it doesn’t matter whether it is Zulfi Bukhari or anyone else running it, the departments should continue to function as proper institutions. 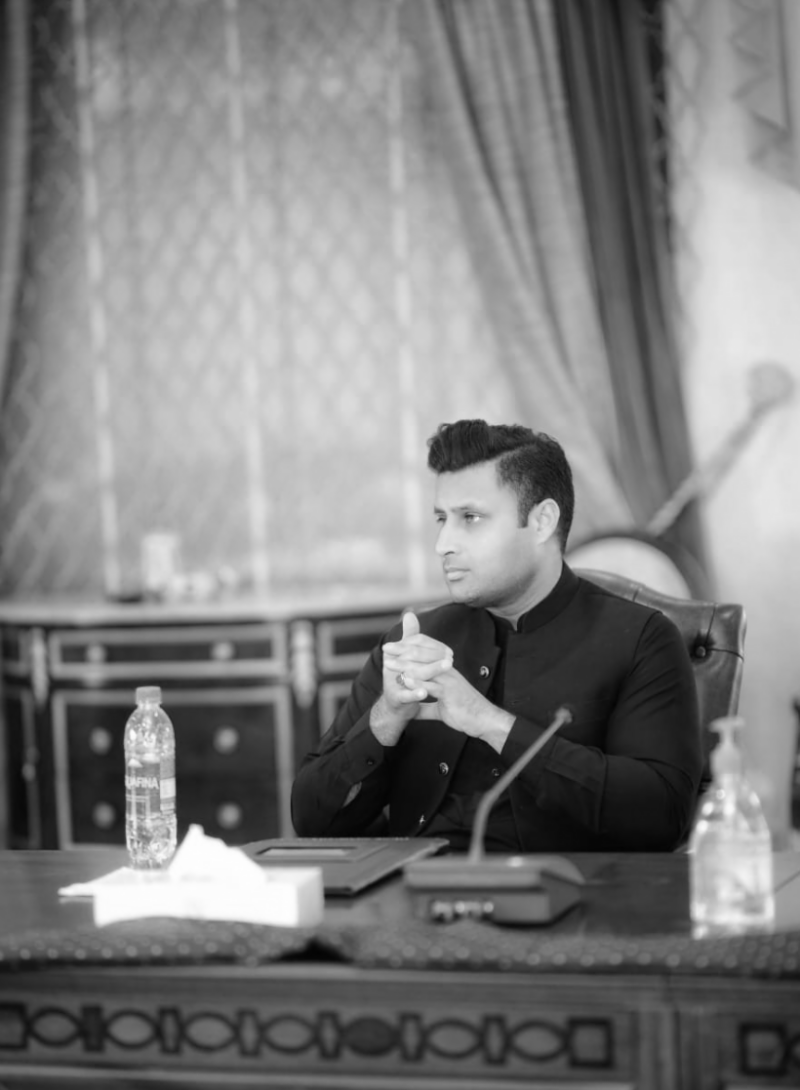 What does the term ‘Naya Pakistan’ mean to you?

‘Naya Pakistan’ for times to come will be associated with Prime Minister Imran Khan, and with Imran Khan comes transparency, trust and honesty and that is hallmark, let it be politics or philanthropy.

What is it about Prime Minister Imran Khan that sets him apart from other politicians?

First and foremost what sets PM Khan apart is that there’s no other politician in Pakistan who is Sadiq and Ameen, if you look at any other leadership none of them have those qualities. Secondly, Imran Khan had put Pakistan on the map a very long time before even becoming Prime Minister, he was a globally known cricketer, a celebrity, a philanthropist and a politician before becoming the Prime Minister. So he’s really the done the entire journey and is a real role model. People follow him universally regardless of whether they are from PTI or not. He sets the bar in everything he does, for instance he could don a chappal and whether it is nice or ugly, you see it becoming a hit.  Nawaz and Bilawal on the other hand may wear anything and you’d never see it becoming a hit. 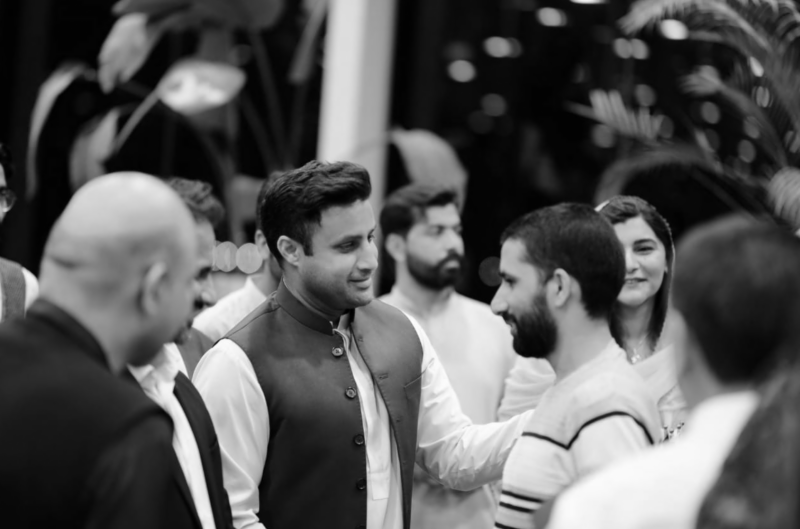 Tell us about yourself. Who is the real Zulfi Bukhari?

God fearing, always up for challenges and eager to take the more difficult path.

If you could permanently change one thing about Pakistan, what would it be?

What is your experience with social media? Whose social media do you love to follow other than Imran Khan?

Social media is one of the biggest powers in the country now, our party PTI explored it the most to their strength and it has been a real entity in PTI politics.  Apart from PM Imran Khan, the person I love to follow has to be Umar Akmal in the day for a few good laughs and President Trump late at night. I have to say Maryam Nawaz as well; she has proven to be our most valuable player by always landing herself in trouble with the use of social media. 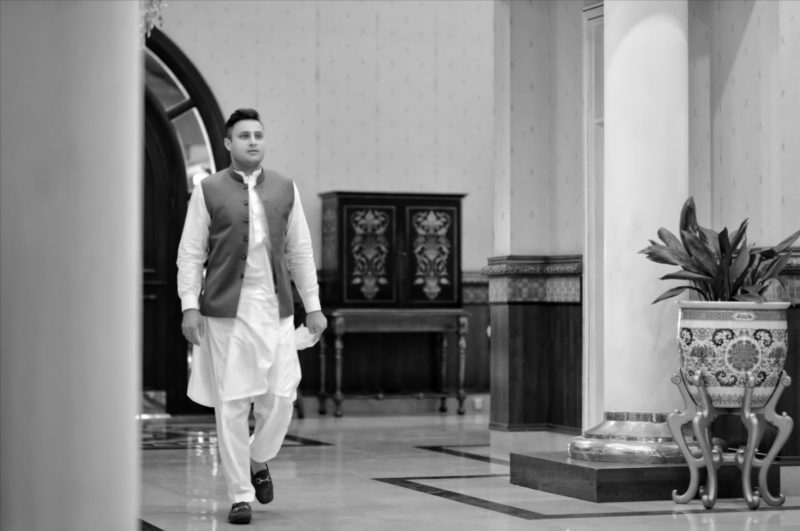 There is political unrest currently and strong criticism from the opposition for the PTI government’s performance in the last two and a half years. What’s your take on it and if you were to rate the performance on a scale of 1-10, how would you rate it?

11 parties getting together is just one big roaming circus. So far they’re just trying to figure out who’s the monkey and who’s the elephant (in the room). But as a government official I appreciate them for abiding by the SOPs and keeping plenty of spaces between each other.

If I had to rate our government’s performance, I would give us 7/10.

What do you have to say to people who consider you a businessman and not a politician? How do you take criticism?

I don’t take that as criticism, I was a businessman before I became a politician and it took me time and effort to learn that. Now I’m learning every day how to become what is considered a politician.  One motivating factor is that people also never considered Imran Khan to be a politician and yet today he’s the Prime Minister. 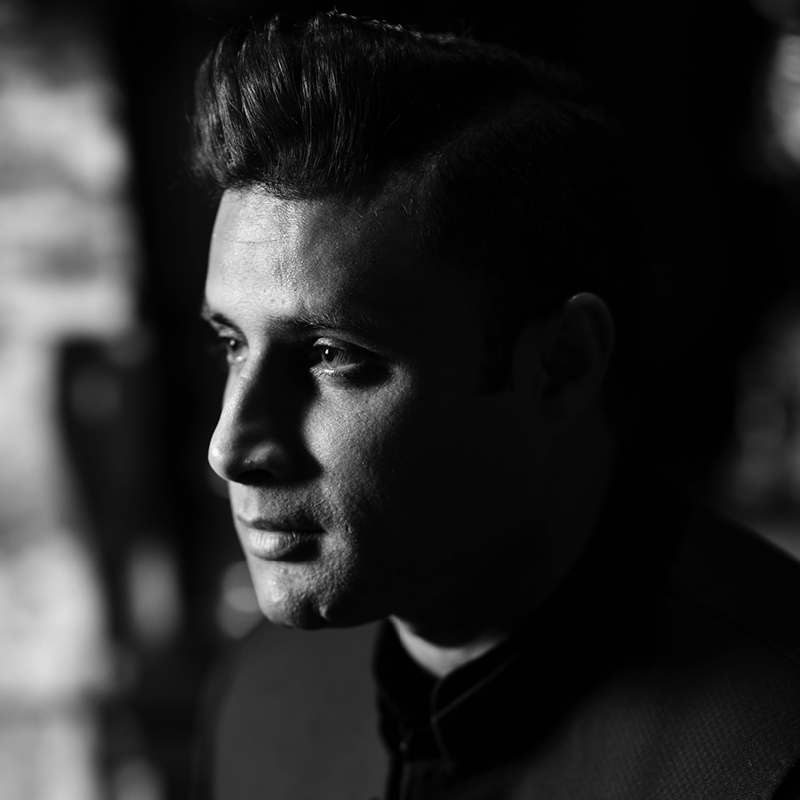 What improvements would you like to make regarding your leadership skills?

I would like to improve my Urdu and Punjabi for starters and to learn to be more patient. But most of all, I’m trying to perfect the art of keeping a poker face.

What keeps you up at night?

The fear of disappointing the people and my mentor – PM Imran Khan.

Where do you take inspiration from for your impeccable style?

There’s never been any particular person.  I just like to experiment with different trends - sometimes I get it right and sometimes I’m not too lucky with it.

What’s on your Netflix queue? Any show that you have recently watched?

I’ve recently watched ‘The Queen’s Gambit’ and am currently watching ‘The Undoing’ on HBO. 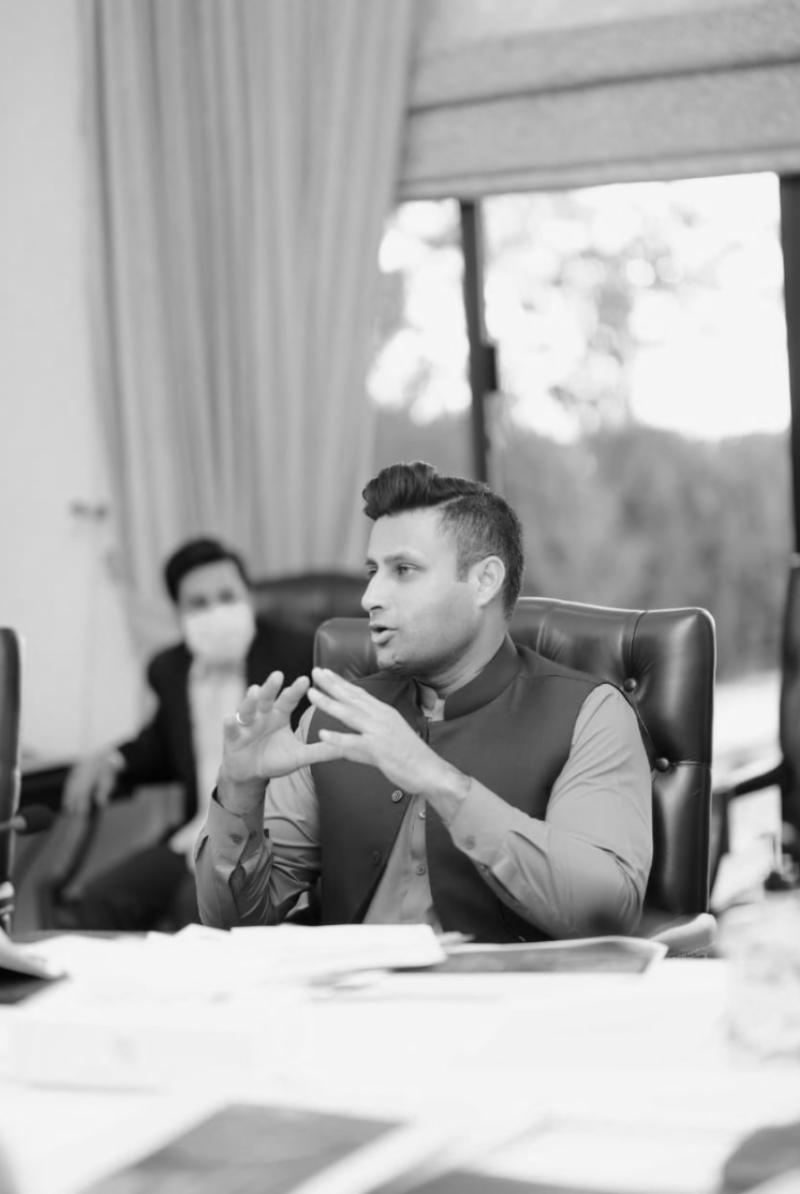 Are you a dreamer or a realist? Has there been any decision in your tenure so far that you regret and you would change if given an opportunity?

I am a realistic dreamer but I definitely try to aim very high. Like they say ‘Aim for the stars, if you fail, you'll land on the moon’

As far as regrets go, at the beginning I was working 19 hours a day and burning out very quickly, it took me some time to realise that I was letting my health go by sleeping 4 hours a day and had to come to terms with the fact that I needed to pay more attention to my mind and body because it’s a marathon not a sprint. It took a while to get back to physical activity; I regret not realising earlier because if you don’t have enough time for your body and mind after a certain stage it starts becoming counter-productive to your work.

Also what is it about Pakistan that continues to give you hope, particularly in difficult times?

The resilience of our people and the unwavering determination of the leadership motivates me daily.

Check out our profile of Zulfi Bukhari on our Hot 100 List!

Hamza Haroon: A Harvard Graduate on a Mission to Serve Pakistan