Sabika Sheikh, a 17-year-old Pakistani scholar participating in the Kennedy-Lugar Youth Exchange and Study (YES) programme in the US, was one of the 10 people killed when a teenage classmate armed with a shotgun and a revolver opened fire in the Santa Fe High School in Texas.

According to her father, Sabika — the eldest among three sisters but younger than her brother — was due to return home on June 9. Her family had been counting the days till her return.

Hailing from Karachi, Sabika was described as a brilliant student by her father. She had completed her matriculation from Karachi Public School.

According to the Wall Street Journal, she was an honour roll student at the Santa Fe High School.

US Ambassador David Hale expressed regret at Sabika's death with the following message posted on the US Embassy Pakistan's Facebook page:

"This morning, I called the family of Sabika Sheikh and offered my deepest condolences. As an exchange student, Sabika was a youth ambassador, a bridge between our peoples and cultures. All of us at the US Mission in Pakistan are devastated by and mourn her loss. We will honour her memory." 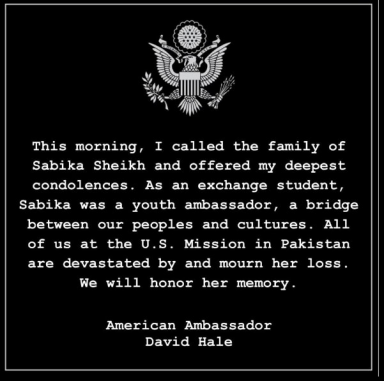 U.S. Secretary of State Mike Pompeo also offered his condolences in a statement Saturday, saying that “Sabika's death and that of the other victims is heartbreaking and will be mourned deeply both here in the United States, and in Pakistan.”

Aisha Farooqui, the consul general at the Pakistani consulate in Houston, said in an official statement that the US State Department had sent them official confirmation of Sabika's death in the Santa Fe shooting.

“Our thoughts and prayers are with Sabika’s family and friends,” a tweet from the Pakistan Embassy in Washington DC quoted. 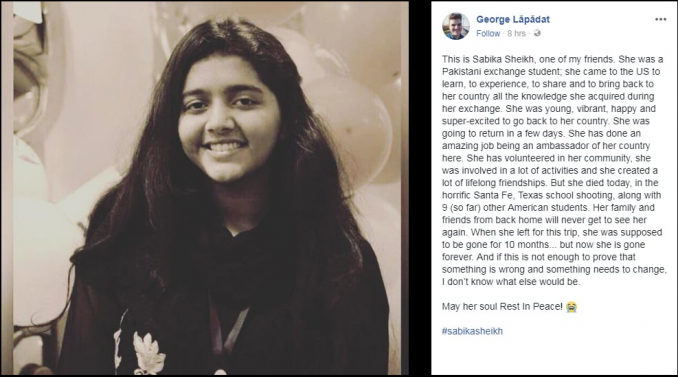 Among the victims was Sabika Sheikh, a Pakistani exchange student. “Our thoughts and prayers are with Sabika’s family and friends”. Ambassador Chaudhry 2/3

George Lapadat, an exchange student from Romania, who claims that Sabika was one of his friends, took to Facebook to express his feelings,

He wrote,  Sabika "came to the US to learn, to experience, to share and to bring back to her country all the knowledge she acquired during her exchange."

"She was young, vibrant, happy and super-excited to go back to her country. She was going to return in a few days. She has done an amazing job being an ambassador of her country here."

Lapadat added: "When she left for this trip, she was supposed to be gone for 10 months... but now she is gone forever."

"And if this [the shooting] is not enough to prove that something is wrong and something needs to change, I don’t know what else would be," he concluded.

Megan Lysaght, manager of the YES programme, sent a letter to students in the program confirming that Sabika Sheikh was killed in the shooting.

“Please know that the YES program is devastated by this loss and we will remember Sabika and her families in our thoughts and prayers,” Lysaght wrote.

The Pakistan Association of Greater Houston said on Facebook that Sabika was due to go back home to Pakistan for Eidul-Fitr, “May Allah bless her soul and may she RIP,” the statement said.

Just recently, the world's youngest recipient of the Nobel Peace Prize, Malala Yousafzai also added her statement over the untimely demise that read,

“I offer prayers and sympathy to Sabika Sheikh's family and the families of her fellow victims.

Sabika travelled far from home to learn and prepare for a career in public service. She dreamed of making Pakistan proud. It's painful to see so many bright futures cut short in yet another school shooting. I hope leaders in the US, Pakistan and around the world will do justice to the lives of Sabika, her classmates and their teachers by doing more to stop violence in schools.”