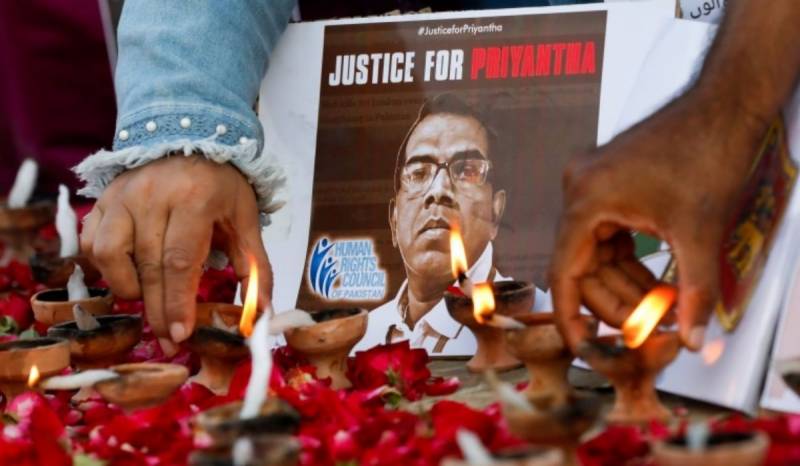 Deaths of future Kumaras can only be prevented when we collectively condemn personal prejudice blanketed as blasphemy. Our inaction however, is why we are all murderers of Kumara.

A mob of extremists in the Sialkot district of Pakistan took the life of a Sri Lankan factory manager over alleged blasphemy.

It was reported that due to the renovation of the factory’s buildings, posters had to be taken down which may have had the name of the Prophet written on them.

Priyantha Kumara, whose body was set on fire after being beaten up badly, worked in a textile factory. A video regulating online shows his body being thrown around and his clothes being torn apart. People in the crowd can also be seen taking selfies with his dead body.

Following the incident, the Pakistani Prime Minister took the matter to Twitter and said the attack was ‘A day of shame for Pakistan’. He went on by saying that justice shall be served with full sovereignty of law and that he will personally be overseeing all investigations.

Police have been said to have taken 48 people in custody and sent the victim's body for autopsy. The Police Assistant Commissioner, Mohammed Murtaza, said: 'Unfortunately, I can’t affirm or deny anything at the moment. The alibi used for murder is blasphemy but the cause of murder appears personal and targeted. The issue is being investigated.'

However, this isn’t the first time people have fallen victim to extremism in Pakistan as the notorious laws against blasphemy, which carries a death sentence, are often used as an excuse to mistreat religious minorities in the country. Asia Bibi, a Christian woman, was sentenced to death in 2010, followed by the incident of April 2017, when Mashal Khan, a university student, was lynched by an angry mob as he has been accused of posting content that indicated blasphemy.

But with the rising awareness, people have had enough and the Pakistani government has been under pressure for changing blasphemy laws as last night, Sialkot was trending on Twitter Pakistan.

Pakistan has been known to have the roughest blasphemy laws - and despite the Pakistani government having been pressurized for quite a long time - we fail to see any sort of action being taken.. No matter what progress is made by the government regarding the case, it cannot bring Kumara back or change the mentality of people who are given a free pass to do everything unacceptable in the name of religion. Deaths of future Kumaras can only be prevented when we collectively condemn personal prejudice blanketed as blasphemy. Our inaction however, is why we are all murderers of Kumara. And if our silence stays, then even though it may have been Kumara today, tomorrow it can be any one of us.

Test Cricket Returns To Pakistan In A Two Test Match Series Against ...