Pakistanis take to social media to question the beauty standards we have learned to comply to. Amidst the debate, renowned skin care brand Fair & Lovely now known as Glow & Lovely opted to change their depiction of beauty. Several celebrities have also voiced their thoughts on the impact of this rebranding. One of the stars who recently commented on the change in narrative, was celebrated Pakistani actress, comedian and host Hina Dilpazeer.

Being in the industry for a long time, Hina Dilpazeer has been cast in some of the most popular comedic roles and is credited as one of the most talented comedic actresses in Pakistan. Always opting to depict unconventional characters, the actress has also brilliantly pulled off seven different roles in one of her dramas.

In her post, Dilpazeer acknowledges the significance and symbolism behind the change in marketing. She notes the rebranding as one steering the brand in the right direction: 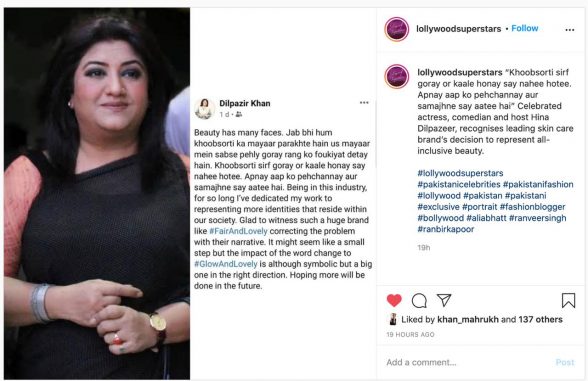 “Beauty has many faces. Jab bhi hum khoobsorti ka mayaar parakhte hain us mayaar mein sabse pehly goray rang ko foukiyat detay hain. Khoobsorti sirf goray or kaale honay say nahee hotee. Apnay aap ko pehchannay aur samajhne say aatee hai. Being in this industry, for so long I’ve dedicated my work to representing more identities that reside within our society. Glad to witness such a huge brand like #FairAndLovely correcting the problem with their narrative. It might seem like a small step but the impact of the word change to #GlowAndLovely is although symbolic but a big one in the right direction. Hoping more will be done in the future.”

5 Skincare Products Everyone Needs To Buy For Glowing Skin

Caquina Beauty Is Here To Change Your Skincare Game Forever