A Charitable Empire Made Out of Nothing

On the 8th of July, the world was struck by immense grief and shock when the notable humanitarian, Abdul Sattar Edhi, crossed paths with the angel of death.

To the global community he is seen as a saint, an adamant persona whose matter of fact nature aided in constructing a vast empire which reflects the better part of humanity. The philanthropist dedicated his mind and body to working endlessly toward providing a secure and healthy environment for those whom society is quick to discard.

The man himself came from a humble background, getting by as a wholesale cloth dealer in the heart of Karachi. Citizens were affected by an epidemic, lying on pavements adorning a helpless aura prior to his work, benches were set up and Edhi got medical students to volunteer. He was penniless and asked for donations on the street but nevertheless people gave and he bought an 8 by 8 room to start this work.

Over the years Edhi had never failed to deliver his share of empathy to the Pakistani society and abroad when the Edhi Foundation aided the survivors and displaced persons of hurricane Katrina. It’s his ever dying love for the rudiments of humanity that led him to believe that there is no religion greater than the religion of humanity, which overlooks all barriers and discriminations and is simply manifested due to a fundamental emotion known as love.

It is no doubt that I am running out of superlatives to describe him as I presume that there is no word great enough to reflect the journey of a man’s undying legacy.

Many celebrities and notable personalities took to Twitter to express their grievances and condolences, to pay tribute to the man who was once and will always be known as our nation’s savior. 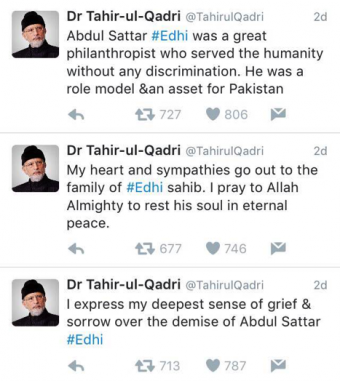 Padmaavat Review: Much Ado About Nothing

DISABILITY CAN BE A PHYSICAL LIMITATION BUT NOTHING CAN LIMIT A ...