The live-action reboot of  The Little Mermaid will mark Halle Bailey's feature film debut playing the lead role of Triton's daughter, Ariel. Bailey makes up one half of the musical duo Chloe x Halle, and is signed to Beyonce's Parkwood Entertainment label after gaining massive popularity on YouTube.
Soon after the news broke on Twitter, the soon-to-be mermaid took to Instagram to share her excitement. 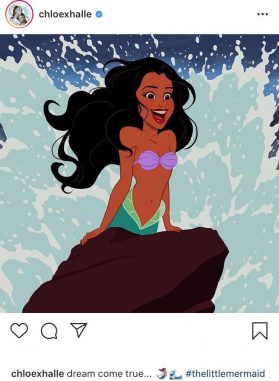 “After an extensive search, it was abundantly clear that Halle possesses that rare combination of spirit, heart, youth, innocence, and substance — plus a glorious singing voice — all intrinsic qualities necessary to play this iconic role,” Marshall said in a statement.
Cast additions include child actor Jacob Tremblay as Flounder, and Crazy Rich Asians breakout star Awkwafina. Melissa McCarthy is reportedly also in talks to play the villainous, Ursula, in the upcoming reboot.
This is a huge moment for the entertainment industry as we're seeing colorblind casting having a major breakthrough.
Share: