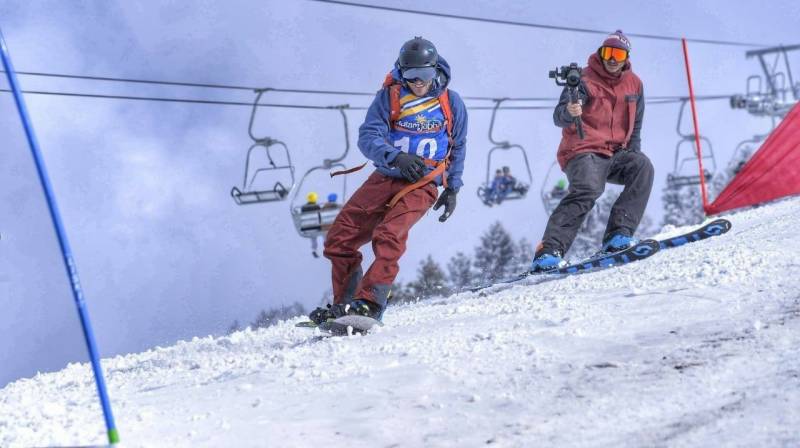 A trip to the Switzerland of Pakistan

Let’s be honest about this one – After a year of being couped up at home and not going anywhere for fear of a deadly virus; a trip to the Northern landscape of Pakistan didn’t sound too bad. It didn’t matter that the trip came in the middle of a biting winter either. We (The H! Pakistan Team) were requested by the Samsons Group of Companies and Lotus – the organizers - to cover the 2nd International Snowboarding Championship that would be taking place in Little Switzerland aka Malam Jabba. Of course, we would agree! 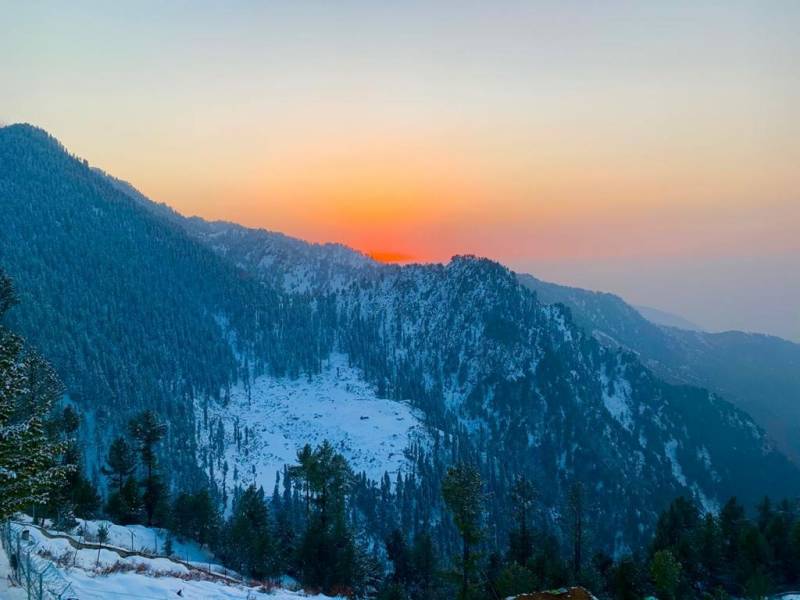 The journey began at around 2pm – for us at least – we converged at a meeting point with the Lotus team, the Samsons representative, certain influencers’ and the Drum Circle group (Whom we would be sharing the ride with for at least 7-8 hours, HAH!) and off we rode into the sunset; with our jackets, chocolate and the nagging feeling that we forgot something at home.

Now the ride to our destination was riddled with obstacles, pain and strife – you know, the stuff novels are made off? – Just kidding, it was a comfortable ride where we interacted with our van mates – who have excellent taste in music.

When we reached The Pearl Continental Hotel Malam Jabba – it was a sight for sore eyes. The urge to fling ourselves off the van and into the warm and deliciously cozy beds was unbearable, however, the rules had to be observed.

The Hotel itself was aesthetically attractive – both its interior and exteriors. And the staff were very accommodating. The night ended with a tasteful buffet dinner, warm pajamas and two tablets of Panadol. 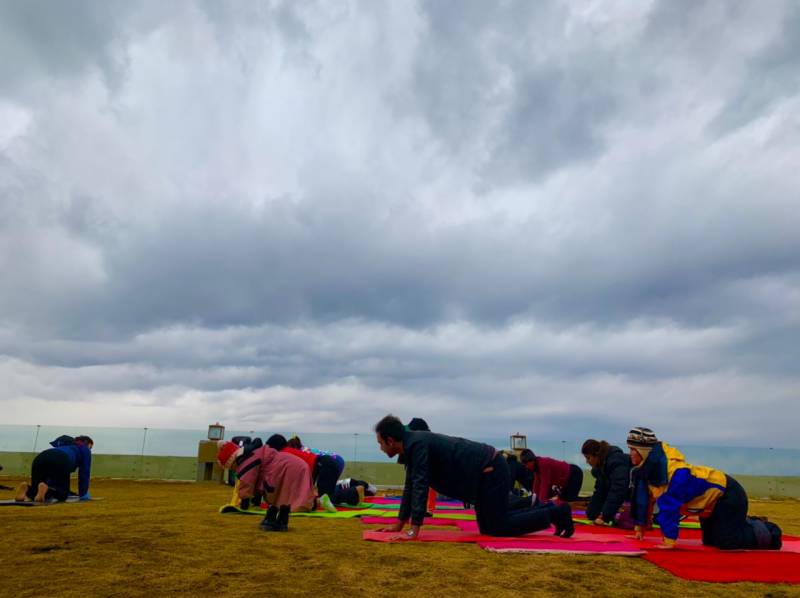 The next morning, we nearly missed breakfast; which was again amazing – French toast, croissants, aloo channay, cheeses’, salami, varieties of meats etc. – all the good stuff you’ll never find in one place back home. Moving on, the post breakfast activities organized for us included the digestion of said breakfast – with Mountain Yoga or Yoga in the Mountains – pretty self – explanatory no? The instructor was a beautiful lady – Ms. Mahgul from Soulmat.pk – who gave two sessions to us mere mortals to help us relax and rejuvenate or at least that was the intended purpose. It was an interesting experience - stretching outdoors in the bitter cold, feeling your blood freeze within your veins whilst being surrounded by a valley of snowcapped mountains and pine trees. It was quite scenic. This was followed by a trip to the Malam Jabba Ski Resort – which was literally a few feet away. In addition to the sports activities, the Malam Jabba Ski Resort also organized a food festival with franchises from Lahore, Islamabad, and Swat offering scrumptious food to the tourists. Gloria Jeans had also recently opened up a franchise there – Hot Coffee and Snow – Can there be a better combination in existence? The Resort also offered snowboarding lessons – complete with gear, chairlift rides and ziplining amongst other things; and just as we were preparing to begin the adventure with the chairlifts a snowstorm happened – Yes, just like the novels only this was very much real. Thankfully, the PC Hotel was within walking distance hence we all made it back safely. Then followed lunch: Pasta, Lamb, Biryani, some Potato and white sauce concoction, Chicken korma and salads (The deliciousness of which I cannot put into words) etc. 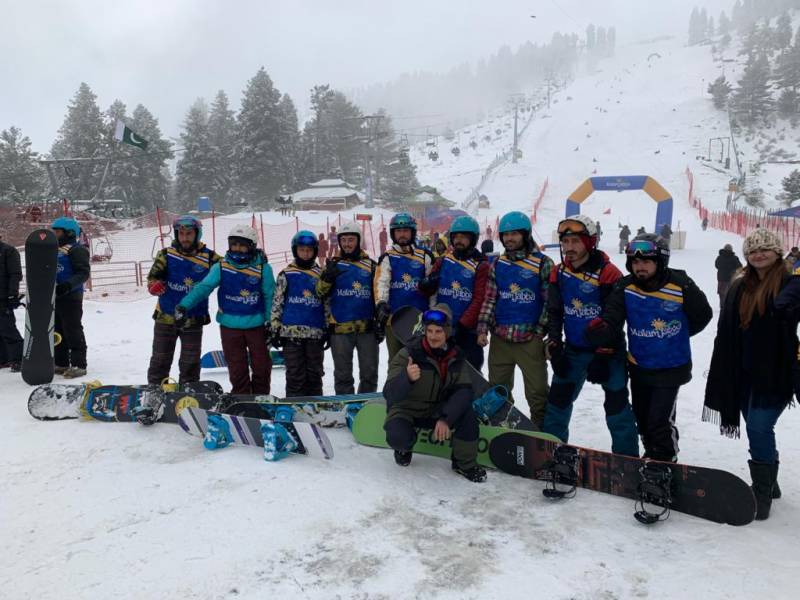 Eventually, when we all re-emer ged from hibernation in the evening – we began the much heard of experience of the Drum Circles, which was arranged at the hotel to help athletes mingle up and entertain themselves through music. Upon discussions about the concept of these popular Drum Circles a member – Haider Jamil – referred to it as therapeutic. And it was, with the added perk of being fun. 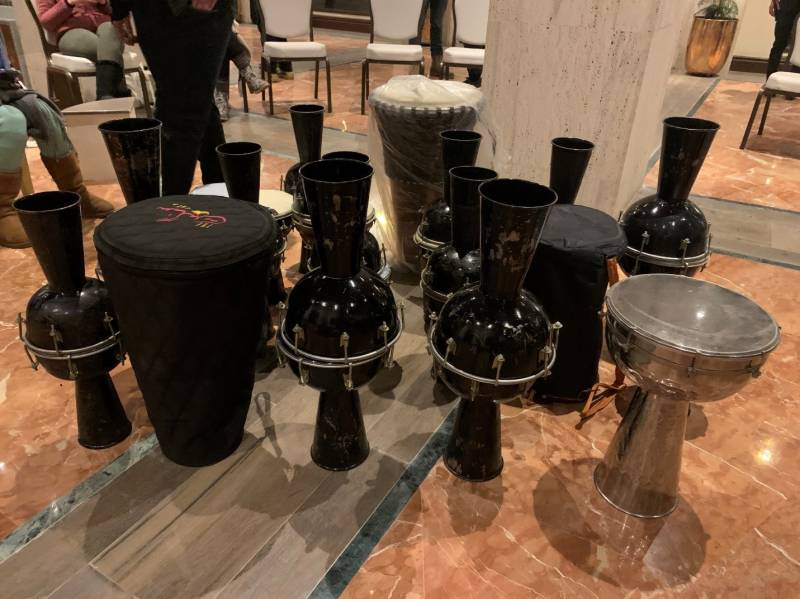 The next day commenced in somewhat of a similar manner, however, the yoga was held indoors this time as everything – and we mean everything – was covered in a lush blanket of pure white snow. It was the most breathtaking sight we had ever seen – and all this from the comfort of the Hotel. Soon after, we wore our snow gear – puffer jackets and warm layers – and headed off to the Malam Jabba Ski Resort for the delayed adventure. There we saw the players for the Snowboarding Championships practicing on the steep slopes making us all go ‘Oooooh! Aaaaaah!’ 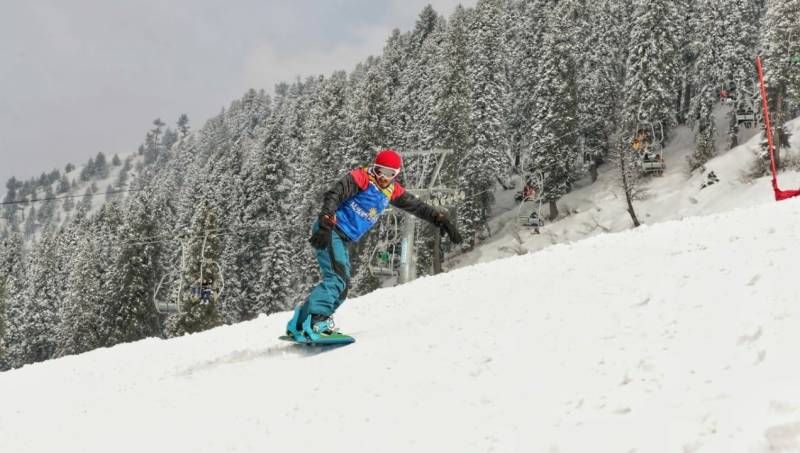 Our first ride of the day began with the chairlifts, it was followed by an ill-fated trekking through the snow towards a high point – which we never reached because of our slippery shoes and eventually ended with Ziplining (Our first time) it was a wonderous experience – It was more awe-inspiring than thrill inducing – but it was a sight to behold.

Especially the views from the mountain top – Nothing can compare. It was almost incredible that such a place could exist – and that too within Pakistan.

Once the light began escaping us, we all trudged to Gloria Jeans for warm, coffee flavored comforts after a cold full of breathtaking views. 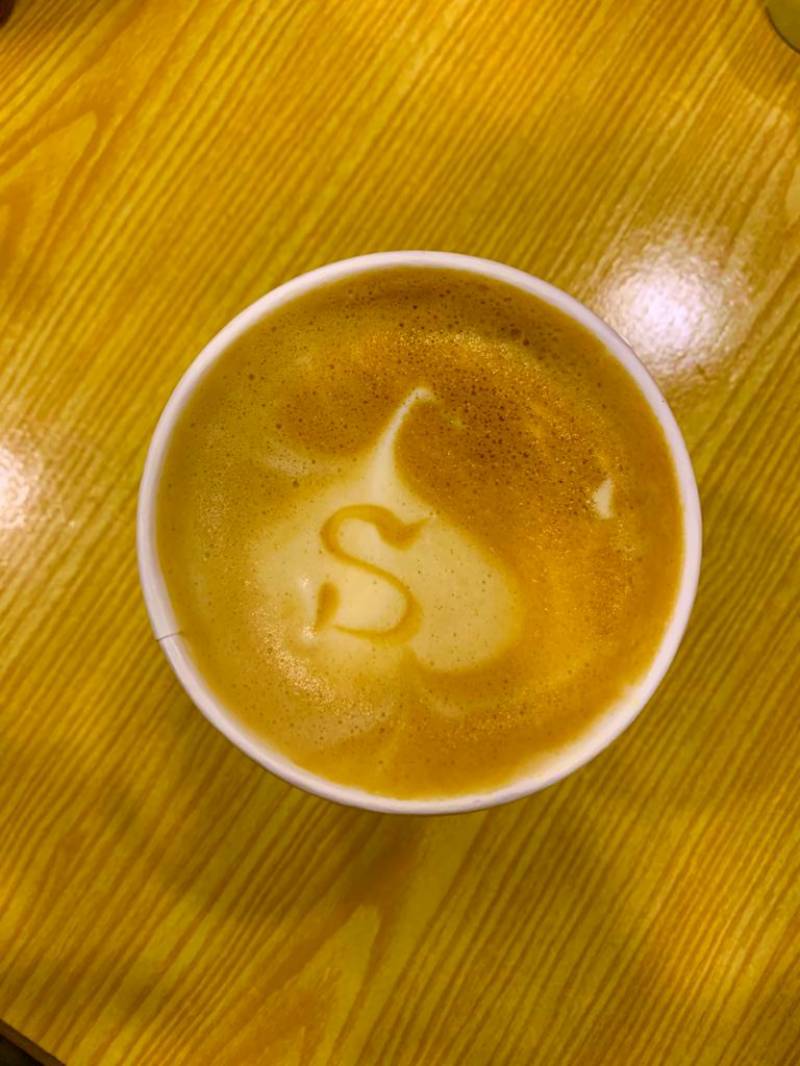 Coffee was followed by rounds of mingling, laughter and a great flow of conversation all round. Upon returning to the Hotel, the organizers informed us of two VVIP Guests who will be attending the nights festivities with us: Senator Faisal Javaid (PTI) and the renowned TV anchor Mr. Waseem Badami. Overall, the night ended pretty much like the previous night and on a fabulous note.

The final morning began with us witnessing the much-awaited Snowboarding Championships. This was followed by the closing ceremony which was attended by Senator Faisal Javaid (PTI) and the renowned TV anchor Mr. Waseem Badami as chief guests. 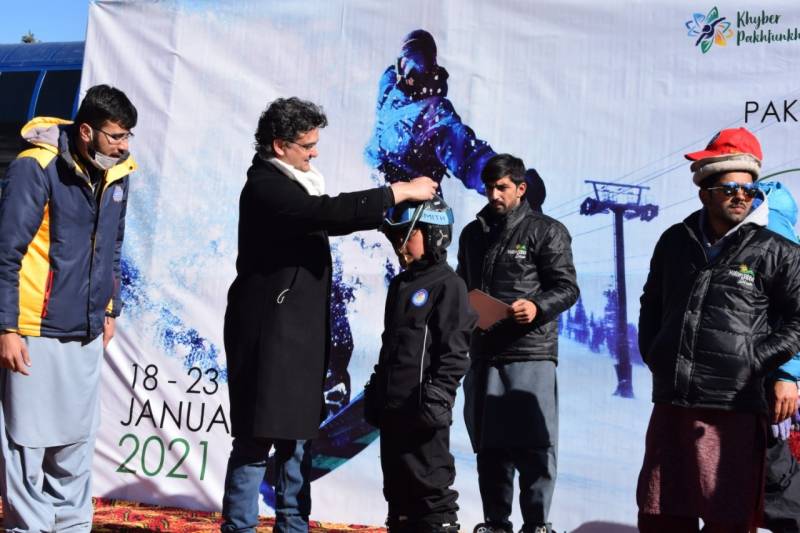 Waseem Ur Rehman, CEO Samsons Group, distributed awards amongst the winners and encouraged participants to join in future for bigger events. The award distribution was followed by a captivating demonstration of further snowboarding and skiing. 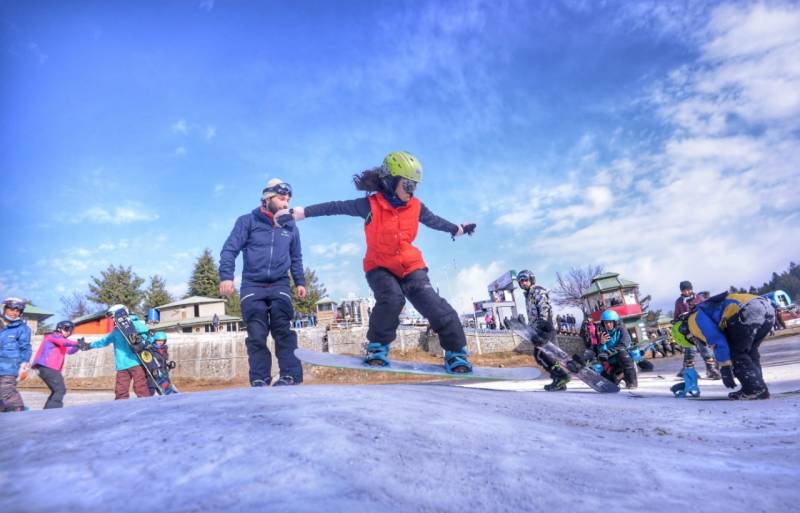 The winners list for each category is as follows: 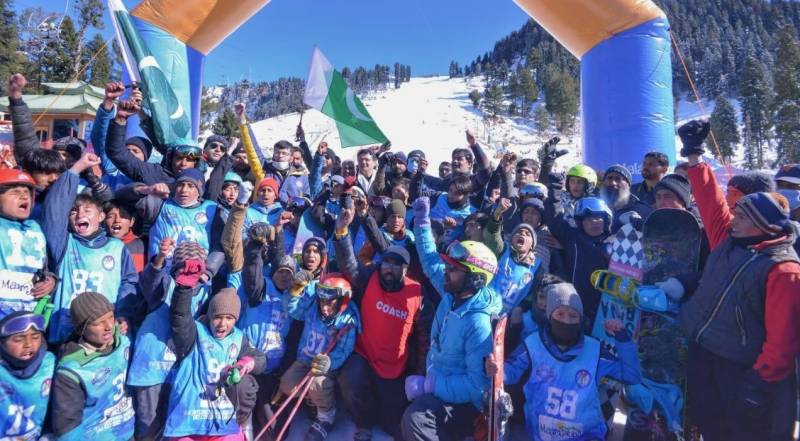 The event was concluded with Senator Faisal Javed saying to a large audience: ‘Malam Jabba Ski Resort welcomes all the tourists and athletes to experience the adventure and luxury at the same time. Finally, the vision of PM Imran khan is becoming true.’

Overall, this was an experience that went far and beyond our expectations. The views, the activities, the professionalism and the Beauty were just marvelous! No words can capture the feelings created in that moment when one sees the top of a mountain, or pines covered in snow or food that brings you joy. All we can say is Thank you to the organizers for letting us experience such a harmony of beauty, hospitality and culture.

Laiba Ijaz Ahmed to represent Pakistan at the US Junior Open Squash ...