Justin Bieber, Katy Perry and Coldplay are among the stars who will join Ariana Grande at a benefit concert following the Manchester attack.

The One Love Manchester show will raise money for those affected by the 22nd May blast which left 22 dead. Take That, Miley Cyrus and Pharrell will also play at the Old Trafford Cricket Ground gig on Sunday.

Grande is offering free tickets to fans who were at her Manchester Arena show.

All proceeds from the concert will go to the We Love Manchester Emergency Fund which was set up by the Manchester City Council in partnership with British Red Cross. The fund has already raised more than 5 million pounds ($6.4 million), according to organisers.

Ariana sent a tweet with details of the concert, with the One Love logo featuring bunny ears which she is popularly known for wearing. Her manager Scooter Braun also tweeted, with the message: "We stand with you." 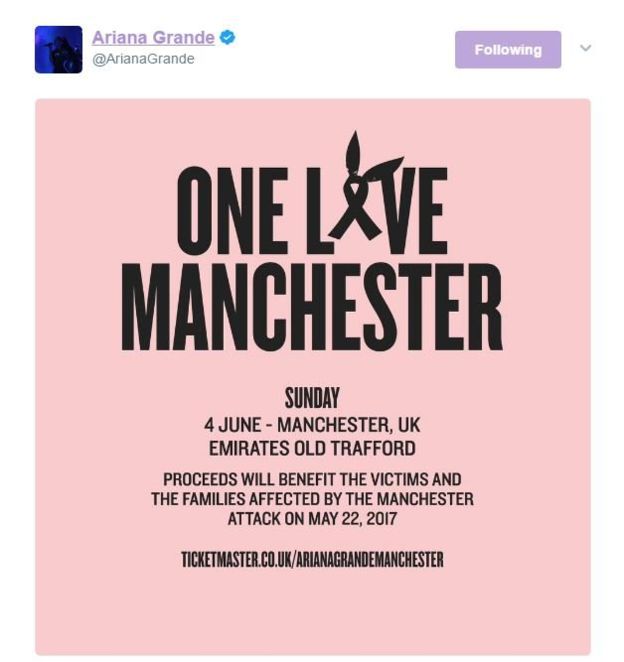 In an open letter on her social media, Grande said, “There is nothing I or anyone can do to take away the pain you (her fans) are feeling or to make this better. However, I extend my hand and heart and everything I possibly can give to you and yours, should you want or need my help in any way.”

Tickets for Sunday’s concert will go on sale on Thursday.

Katy Perry and Gigi Hadid Denied Chinese Ahead Of The Victoria's ...

You Know When You Know: Ariana Grande and Pete Davidson Are Engaged

Sharing The Laughs: A Night of Comedy and Charity