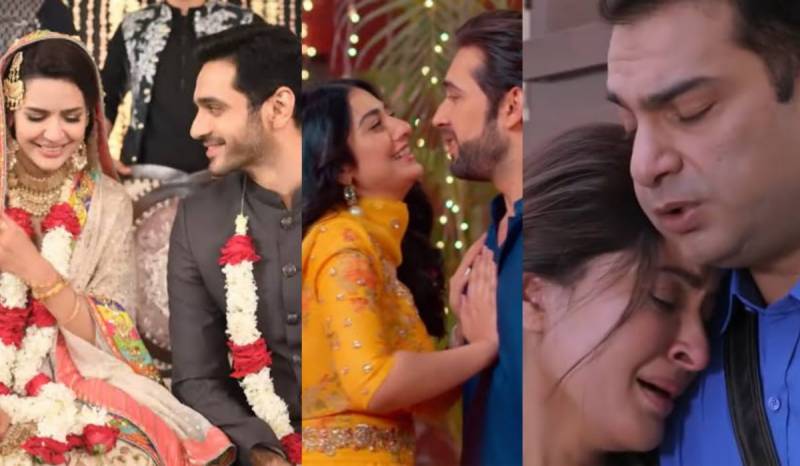 A total of 79 dramas were released this year produced by six major TV channels. Hum Tv took the lead by making 23 dramas followed by Geo and ARY, but there were only a few couples in these dreams that sizzled our screen, melted our hearts, and left us wanting more screen time from them. Today we list down five couples that took our breath away in 2021; couples who not only looked good together, but whose portrayal had a significant impact on our lives.

Shaista and Sultan made their comeback to TV with Pardes, after a long time. The drama revolved around a married couple (Shaista and Sarmad) separated from each other; Shaista is absolutely in love with her husband, does not need a good financial status, and wants to stay with him, yet Sarmad leaves to support the family. As such, it resonated with masses, since many people could relate to their long-distance relationship. Truly, their scenes left audiences emotional and it wouldn’t be unfair to say that it was Shaista and Sarmad’s chemistry in Pardes which kept fans hooked to the drama.

Chupke Chupke added up as one of the most-watched dramas of 2021; it wouldn’t be wrong to say that the power couple was the driving force of the drama. Their love gave a new face to on-screen romance. Not exactly a passionate portrayal of love, audiences internalized how even subtle, nuanced love can leave its mark. Several Instagram fan pages were made, and the couple had their hashtag #hashi - originating from their character names Hadi and Mishi - go viral.

Ramadan dramas bagged views on views with Ishq Jalebi as a prime example, but it also aptly took on social issues whilst providing viewers both comedy and drool-worthy romance between Bela (Madiha) and Basim (Wahaj). Bela is seen head over heels in love with Basim, but for the first few episodes he is unaware of her feelings. Bela’s caring approach towards Basim has the audience wanting more of them in the same frame. However, when Basim realizes that he is also love-struck, Bela is already engaged to somebody else; such twists make the story more interesting. Indeed, Wahaj and Madiha’s on-screen enticement kept viewers glued to their screens.

Laapata was a very refreshing experimental drama with only 22 episodes. The drama had beautiful cinematic shots, groovy OST, but the viewers loved the scintillating on-screen affair of the never-before-seen-together couple, Sarah and Ali. With the couple succumbing to several hardships, it offers a testament to what life is really about. Over time, Shams (Ali Rehman) transforms so much that you can not help but fall in love with him, but together, he and Falak(Sarah) give hope and inspire everybody out there.

Bias we may be, but Minal and Danish outdid themselves as one of the most iconic on-screen couples this year. The plot of Ishq Hai had many loopholes, but their fiery chemistry made fans root for them. They both had their fair share of struggles, but whenever they shared the frame, they left audiences swooning. The drama had problematic views, but deep down, we all wanted both of them to end up together. Definitely the pairing we want to see more of in the next year!

With our favourites featured, we feel we must add in some honorary mentions: *drum roll please*