Shaan Shahid Takes It To Social Media To Defend His Film: 'Arth - The Destination'

Shaan Shahid's  Arth- The Destination released last weekend, and while we see the actor appreciating positive feedback, we also witnessed a meltdown where he defended the film creating quite a stir on social media. 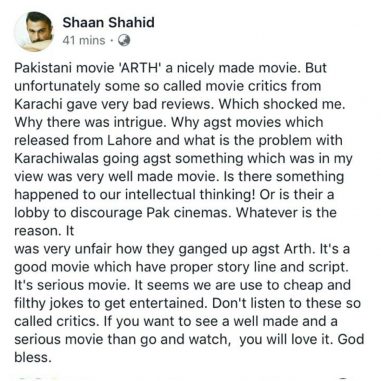 The original post which is allegedly from Shaan’s official Facebook page has now been deleted but screenshots have been circulating across social media. The post also sparked a Karachi vs Lahore debate, where the movie was released from Lahore and Karachiwalas are hating on it.

Taking on this opportunity, comedian Ali Gul Pir also commented on this issue. His tweet read,

“Our so-called artists need to grow up. Ever heard of Meryl Streep or Christian Bale bitching about critics on their social media. No because they believe in their art and don’t care about others. Unlike our celebs who haven’t even done half as good work but act like they invented film form.”

Our so called artists need to grow up. Ever heard of Meryl Streep or Christian Bale bitching abt critics on their social media. No cuz they believe in their art n don't care abt others. Unlike our celebs who havnt even done half as good work but act like they invented film form

Shaan responded, “And with all due respect, I will not compare you to any artists anywhere because I can’t find a suitable comparison anywhere. I hope you understand.” He continued, “We are grown-ups but not for lies. And the choice of words is loathed with arsenic, hate and disrespect. It’s time we strike back at not criticism but lack of knowledge.”

We are grown ups but not for lies . And the choice of words are loathed with arsenic ,hate and disrespect. It’s time we strike back at not criticism but lack of knowledge.

He also pointed out that these so called 'critics’ were misinforming the audience that the film is three hours in duration when it’s actually two hours and 13 minutes.

Besides this Twitter spat, Shaan even shared a public post on Facebook thanking those who supported him in making the film. The post read, “Thank you to all the loved ones for their support in making Arth a success, the people of Pakistan I’m always humbled by their love.”

It is safe to say  Arth- The Destination received mixed reviews.

‘Arth- The Destination’: Was The Film Lost In Execution? Did ...