'Me And Comfortable With It.' Bata Mantra Inspires At Bata Fashion Weekend Prague

Bata Fashion Weekend in Prague from 12-14 April was a stellar footwear show that tapped into Bata's 125-year old history of design success.

Prague, Czech Republic. What a gorgeous venue for a major footwear show by global brand Bata, as it celebrated its 125th anniversary earlier this month in this historical and beautiful European city. Did you know that the company, originally T. & A. Bata shoe company started in Zlin, Czech Republic in 1894 by founder Tomas Bata — he was an innovator with a sharp business mind and the company soon expanded in Europe — by 1905 it was at the top — and then  it took on the the world. Today it employs 35,000 people in 70 countries.

This year’s Fashion Weekend theme ‘The Evolution of Style’ was an apt reminder of the evolution and success of the brand — to be in Prague and to hear Bata’s story in its land of origin was superb for a history lover like myself and for a fashion enthusiast. One also learnt that in keeping with the brand’s mantra, Bata’s current CEO Alex Nasard believes that the ultimate aim of modern footwear is to deliver optimal comfort and style — a great concept, especially since innovation is also at the heart of the Bata brand and technology now has a huge role to play in the shoes that we wear! This was the global brand’s third fashion weekend, the last two were held in Prague and Milan, Italy.

The exciting part of the get-together was the opportunity to meet the top-tier management of the brand, as well as fashion and lifestyle journalists and influencers from around the world who came for this exclusive event. H! Pakistan was invited to speak exclusively to Jana Barbati Chadova, Bata’s Head of Global Marketing, as well as to Charles Pignal (interview below), the great-grandson of Tomas Bata, and the Director of Bata Heritage.

The Fashion Weekend comprised a stunning catwalk show, an exhibition of men and women’s shoes from different collections presented in a museum format; the Bata Young Designer’s Challenge contest finale  — contestants were asked to make a limited edition sneaker with the ‘Evolution of Style’ theme. The finale of the Bata Fashion Weekend was also streamed live across the world on YouTube and Facebook. The weekend was two-days of non-stop activities with a lovely dinner for all delegates on Day One, as well as a Gala evening on Day Two, interspersed with theatrical and musical entertainment and shoe showcases on the catwalk. 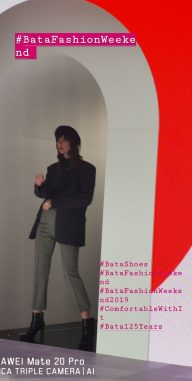 SmyBox, a dedicated photo corner to take a group wefie was super fun! Check out Team Pakistan’s attempt below. Good fun for all types!

The Bata Shoe Company was established in Lahore, in what was undivided India, now Pakistan, in 1940 and went on to become the Bata Shoe Company Limited when it went public in 1979. The company has hundreds of stores, outlets and franchise partners in the country. 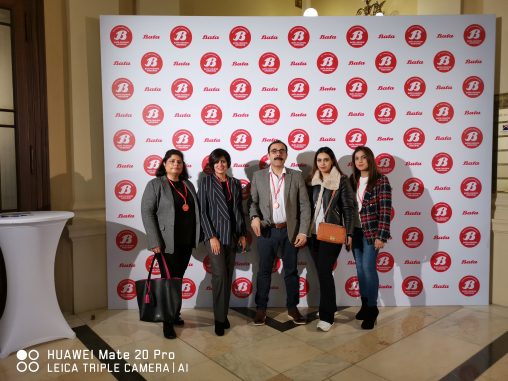 Bata Fashion Weekend was held at the magnificent neo-Renaissance Zofin Palace in Prague — built in 1836 and named after Princess Sophie, the mother of Franz Joseph I, Emperor of Austria, the palace is now used as a concert hall.

Amna R. Ali is the Editor of H! Pakistan

Fur Shoes: A Trend That Is Here To Stay This Fall

Mausummery by Huma S/S ‘18: Cool and Comfortable For The Summer