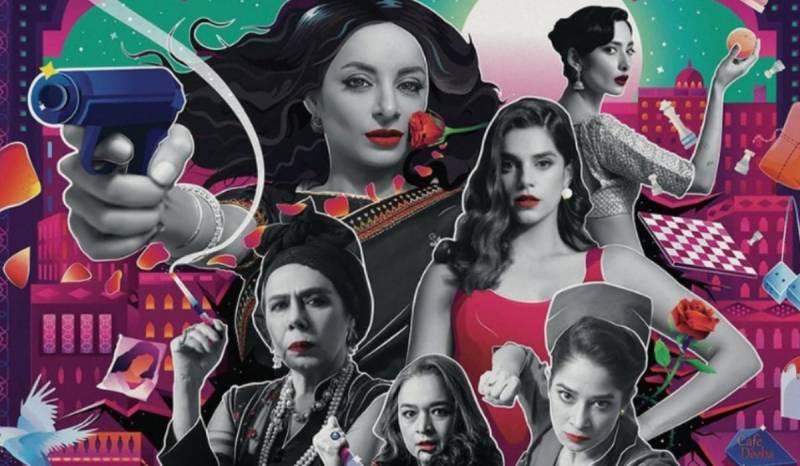 Despite its baroque affectations that drag the narrative, Qaatil Haseenaon Ke Naam is watchable because of Gaur’s flamboyant direction, intensified by Mo Azmi’s visual palette, and the eclectic music. But it works mostly because of the haseenas. Nearly all the lead performances are to watch out for: Samiya Mumtaz as the dignified but deadly Mai Malki; Mehar Bano as the hooker with a heart of gold, Anarkali; Eman Suleman as the resilient Zehra; Faiza Gillani as the sympathetic nurse Kanwal, and Beo Raana Zafar as Massey Ma, whose age belies her sharp instincts and drive for justice.

Qatil Haseenaon Ke Naam, premiered on the 10th of December, 2021, had a lot in common with Zee5’s successful 2020 series, ‘Churails’.  Both series share key cast members: Sarwat Gilani, Mehar Bano, and Eman Suleman, as well as crew members, including cinematographer Mo Azmi, editor Kamran Shahnawaz, and score composer Saad Hayat. So of course you could see a strong overlap of themes, aesthetics, and production values. Despite the fact that churails had crazy energy, it maintained a balance between realistic go-girl comic-book saga Qatil Haseenaon Ke Naam unfolding in an out-and-out fantasy space.

This show is for men who exploit women. We see different kinds of male characters being portrayed although none of them are worth anything. We see misogynist cops, seemingly innocent robbers, spineless husbands, lustful, vicious holy men. These men rule over the women, all of whom have come to the end of their tether, and all of whom are fighting to find a way out of the morass.

Co-written by Meenu Gaur and Farjad Nabi, and directed by the former, ‘Qatil Haseenaon Ke Naam’ is a dark ride into a fantasy land where we see centuries-old wrongs being set to the rights, and everyone lives happily after. The director’s attempts at subverting the classic noir gaze lead to an upending and undoing: this is feminist noir, and enough of it is thought-provoking and entertaining.

Qatil Haseenaon Ke Naam is set in the fictional Androon Sheher, meaning ‘walled city’, which is one way to say that anything that happens here is walled off from reality. Everybody knows everybody here. There appears to be just one dargah, one cop, one mafia don, which are all elements to connect one episode with another.

There are six stories, with different folks, but the same strokes. Two men, both of whom love the same woman (Sarwat Gilani), find themselves confronting each other on a dark night. One lied and got the woman; the other nursed a broken heart. And now the true lovers are about to reunite. A hairdresser dreams of his paramour who lives with his wife. The wife is an artist or thinks she is one. Who will get whom? Or, in other words, who will win the fight? You get an inkling about how this will end, but the gorgeous Zuvi’s (Sanam Saeed) take-charge demeanor and a gleefully macabre touch is a thing.

Then there’s a nurse (Faiza Gilani) who is at the center of a story about aging (‘dhalti umar ki auratein’), and ‘ordinary-looking’ women. This story features a hospital, a chase, and a bunch of baddies: it’s all very filmi. But we know that there will a tight slap on patriarchy’s face, and we will clap at its reverberations. In the fourth, an old woman’s (Beo Rana Zafar) suspicions lead to a murder, and her attempts to make amends.

The title reminds you of the old-timey Urdu dialogues and songs that Hindi movies used to sport, and the old-fashioned courtesies that new fiction can wear to make the point which is as old as time itself: the ancient rage of women is deadly. Enter at your own peril.

Verna's Latest Sound Track 'Sambhal Sambhal Kay' Is Out and We Are In ...