LYARI TO LANDSLIDE SUCCESS, THE STORY & THE STRUGGLES OF 'KAIFI KHALIL'

Have you ever noticed the demeanour of a man doing well in life? There’s a merry, happy-golucky spirit about him, a spring in his walk, he never stops smiling, he’s magnanimous in his success. Kaifi Khalil is all that and more. With back-to-back successes of ‘Kana Yaari’ and of course the earth-shattering ‘Kahani Suno’, for Kaifi it’s a dream come true. As a young, new singer, he often wondered if he would ever reach the shivery heights of stardom. Today he stands vindicated. ‘The journey from ‘Kana Yaari’ to ‘Kahani Suno’ has been nothing but beautiful – the feelings however were different when I wrote ‘Kana Yaari’ and then singing ‘Kahani’ had a diverse approach’, he says. No one knew that a love song that echoes with heartbreak can make so many people so happy but that’s what Kaifi always wanted to do with both of these mega hits of 2022. ‘While writing I only had one thing in mind that people will relate to the song just as much as I do. The immense love that I’ve received throughout has been surreal and that love and appreciation added a lot of happiness to my little world.’

‘I knew people will enjoy the song and that was enough for me but for it to get the love that it did, ‘Kahani’ is like a miracle’

His ‘little world’ certainly got much bigger just in this last year with people singing along and dancing to his songs and sometimes dedicated it to their loved ones too. ‘It’s a different feeling all together to know that there are people who are waiting for you to arrive, to sing along with you and enjoy your music. That love doesn’t need any explanation, for me it’s enough to know that when I go on stage people are not only eagerly waiting but also listening attentively to everything I am saying through my songs.’ 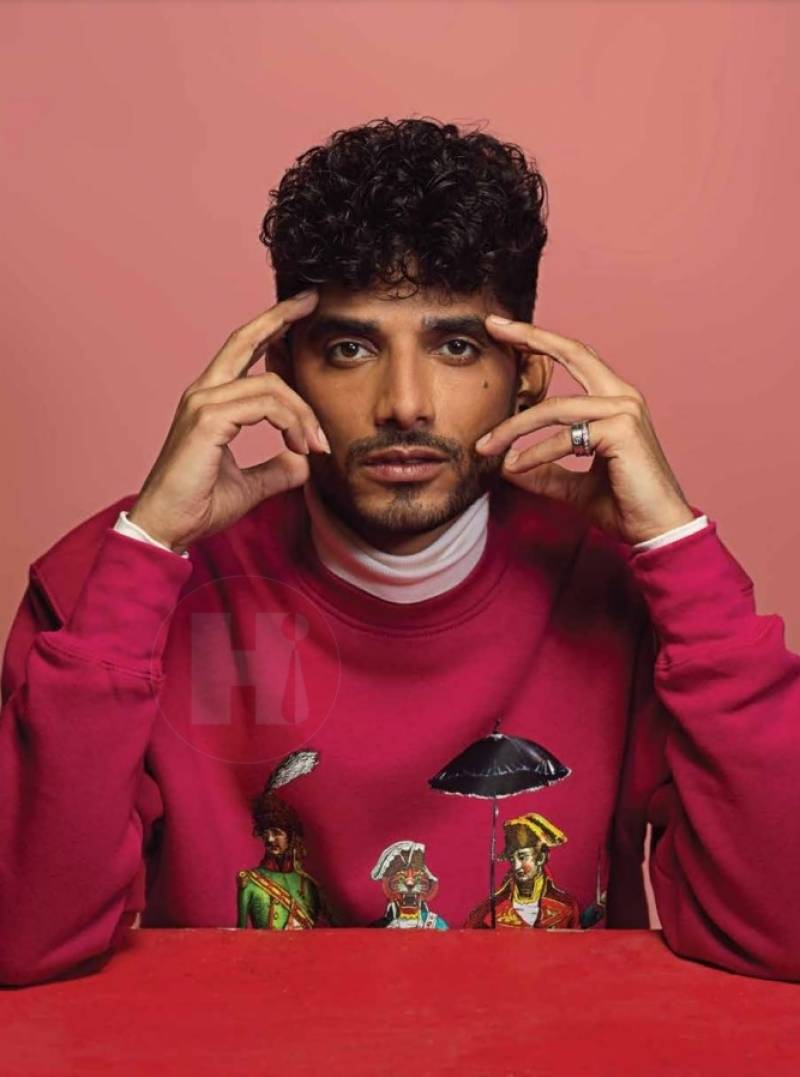 Our cover shoot with Kaifi was in the planning stages since the beginning of December 2022 and then he walked the ramp for the first time dressed in a black tuxedo, with his signature curly hair, that 100-watt smile, singing his latest hit ‘Kahani’ that made the usual, serious, uptight crowd of fashion week to sing along with him – soon the moment was trending all across social media. That perhaps was the first realisation for many including me that this young musician has a spark which is making people of all generations to relate to his music and love it unconditionally. ‘To tell you to the truth I wasn’t sure about how much people will relate to ‘Kahani’ because it’s a modern, new world we live in and this song is stating the emotions that you’re unable to say, perhaps in an old school way but I still went ahead and did it anyway. I knew people will enjoy the song and that was enough for me but for it to get the love that it did, ‘Kahani’ is like a miracle, says Kaifi in his usual soft voice.

‘While writing I only had one thing in mind that people will relate to the song just as much as I do. The immense love that I’ve received throughout has been surreal and that love and appreciation added a lot of happiness to my little world’

The second realisation of his constantly growing fame within a span of months was when we had to change the date of the shoot three times due to his extremely busy schedule, back-to-back performances, appearances and concerts around the major cities of Pakistan. People throng to his concerts and from young teenagers to millennials, all sing along their favourite songs and lines from those tracks especially ‘Kahani’. Kaifi too has his favourite lines from it, ‘there are two lines that I felt very deeply while writing ‘Kahani’ – ‘Teri chahat main kitna fasana hoa’ and second one is, ‘Tha’, tha ka matlab to usse aata hai’.

All the craziness of this song aside, one can’t help and appreciate the diversity and range that Kaifi brings with his music as his first breakthrough song ‘Kana Yaari’ has a completely different vibe, a younger, fun and hip-hop one and the singer can’t help but to go back to the moment when he was told about being part of Coke Studio season 14, he understood the value of it, the enormous opportunity it was and the fan-following it carried for years from around the world. ‘Everyone knows the power of Coke Studio and how big of a platform it is but for me it was also an honour to work with Sir Xulfi – he’s a true genius and a gem of a person. The entire team was thoroughly cooperative and made sure that we don’t feel nervous or let this fear come in the way that this is our first mega project, especially mine.’ ‘It was such a great experience to work with Eva B whom I met on set for the first time and together with Wahab bhai (Wahab Bugti) and Xulfi Sir, we were like a family'.

'There are so many talented artists we have here in Pakistan and I have a few on my list whom I’d love to work with but let’s see and stay tuned to find out who I collaborate with first,’ he smiles while saying this, like he already knows that it will be a collaboration that everyone will love – he seems very self-assured that way. ‘One thing is for sure that I want to do something completely different from what I have previously done.’ There’s a certain spark in eyes and child-like happiness in his voice when he’s talking about his upcoming projects and general excitement he has for music. ‘Music is life, it is what keeps me lively and vigorous. Even though it’s been part of my life for as long as I can remember but there’s never a feeling of saturation but rather I am constantly occupied with thoughts of ‘what else I can do?’, ‘what should I do next?’ – music is what’s always on my mind.’

But whether it’s his music or just his personality, between all the success and chaos, the man gives melancholy vibes but all that goes away the moment he smiles, with all his heart and when he speaks, it’s nothing but good prayers for all. Even though the young singer had a couple of mishaps during his concerts in Islamabad and then in Karachi where the crowd went wild leading to unfortunate circumstances, Kaifi is very humbly taking all this new fame and craziness. ‘Life has certainly changed completely – I am stopped by fans everywhere I go who shower me with so much love and respect and my interaction with them is my favourite thing, whether it’s clicking a picture or giving an autograph. I am always thankful to God who made this possible for me to have this much love in my life. To see this glow on their faces when they see me, always leaves me wondering what is it that they feel when they meet me? It’s such an unreal feeling that people actually are happy to see you'. 'I’ll always pray for all the people who listen to me, to be successful and content and I’ll continue to write and compose for you all.’ Upon asking about any crazy fan stories or strange fan encounters, Kaifi laughingly says, ‘craziest I don’t know but it has happened many times when fans scream your name so loud that you get scared for a moment– they’re so excited to meet you, and they tell you out loud, ‘Kaifi we’re such big fans’. Not crazy but yeah sometimes their excitement takes you aback for a moment.’

A w a y f r o m a l l t h i s pandemonium is a gregarious bunch of family and friends in Lyari, Karachi, place he grew up in and very fondly speaks about. ‘Lyari is swarmed with creative people, athletes, footballers, artists, musicians – it’s such a good atmosphere because you’re surrounded with beautiful people who are willing to make the change. I had a great time growing up there, good and bad times are all part of life but God has been very kind.’ While talking about his struggles and fears, Kaifi disclosed one of his biggest fear which is he says is disappointing or hurting people which goes out to show you the nature of this well-behaved, soft-hearted boy. ‘My biggest fear in general is people getting upset with me – I am always afraid that I don’t want to let anyone down especially my fans who sometimes come and ask to get photographed with me and if for whatever reason it’s not possible, they tend to get very emotional. I never intentionally or unintentionally want to hurt anyone.’

While some may take his music as old-school, Kaifi surprisingly says his reason for success is making music for the world of today. ‘All musicians work hard and want to make the best music – I think finding out your target audience and then following that rhythm is the best way to go. What your listeners want, what kind of music are they into and lyrically what message could you give them, are all the factors that musicians should consider to succeed. Apart from this, just work hard and leave the rest to God because your efforts never go in vain.’ ‘I am always inspired by the new ways and new developments in the world we live in today and this has been the case for me since always and I will continue to make music that is for today’s world.’

'I’ve seen a lot in my life but I know that there are people who may have seen even worst times so my dream is that they will see better days, because for every dark night there’s a brighter day...’

Just like that we rapidly approached the end of this interview without even realising it and I wanted to know what this young singer’s dream must be now, which I thought would get a music related response but once again he surpised me with his a n s w e r a n d m a k i n g m e comprehend why the audience finds him so close to their hearts. ‘My dream is always to be a good human being and strive to only better myself as a person – being kind, and making sure I am never the reason of someone’s unhappiness. I’ve seen a lot in my life but I know that there are people who may have seen even worst times so my dream is that they will see better days, because for every dark night there’s a brighter day...’

Sky is the Limit for a Young Entrepreneur: A Success story of ...

World's Largest Urban Forest Will Be Planned Along The Lyari River

7 Struggles Every Pakistani Girl Can Relate To At A Salon