One of the very few practitioners of MMA in Pakistan, Uloomi Karim is tier 1 athlete and also coaches young talent at his gym Fight Fortress in Islamabad along with his brothers - we met the talented guy at his gym this month to talk about his career, future of MMA in Pakistan and his plans. Even though MMA or mixed martial arts bouts have been taking place throughout the world since the 1900s, the sport has only recently gained massive popularity in the West with organisations like UFC and Pride promoting fights in a huge way.

In Pakistan however, it’s a different story. To figure out why it hasn’t picked up in our country yet, we speak to Uloomi, a practitioner of the sport as well as someone who is currently training young athletes hungry enough to prove themselves in the ring. 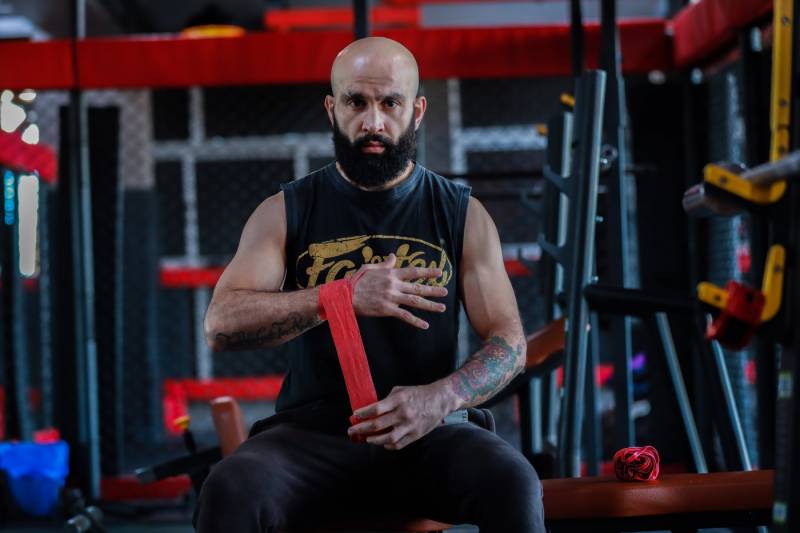 Pleasure to have you Uloomi. Tell us a bit about yourself.

Pleasure is all mine; thank you for having me with you guys. The name is Uloomi Karim but I go by my fight name ‘Kratos’ and belong to the famous Shimshal village in Hunza Valley. I am a professional Mixed Martial Arts (MMA) athlete and belong to the tier 1 of the Pakistani MMA athletes. You can say I am one of the very first practitioners of MMA in Pakistan since my brothers/ coaches at Team Fight Fortress, coach Ehtisham Karim and coach Ali Sultan, were the first ones in the country that started teaching MMA since 2007.

After being a bassist and backing vocalist of a locally famous underground band, DissBelief, for six years, I chose fighting over music and became the first ever Pakistani MMA athlete to win an MMA Championship Title Belt within Pakistan, in December 2012, after fighting three fights back-to-back and winning them all. Then, in January 2016, I became the first Pakistani to win an International MMA Championship, after winning my fight in The Philippines by a Knockout. Recently I became the first (and the only so far) Pakistani to win a Muay Thai (Thai Kickboxing) Pro Championship Title in Thailand in January 2020. 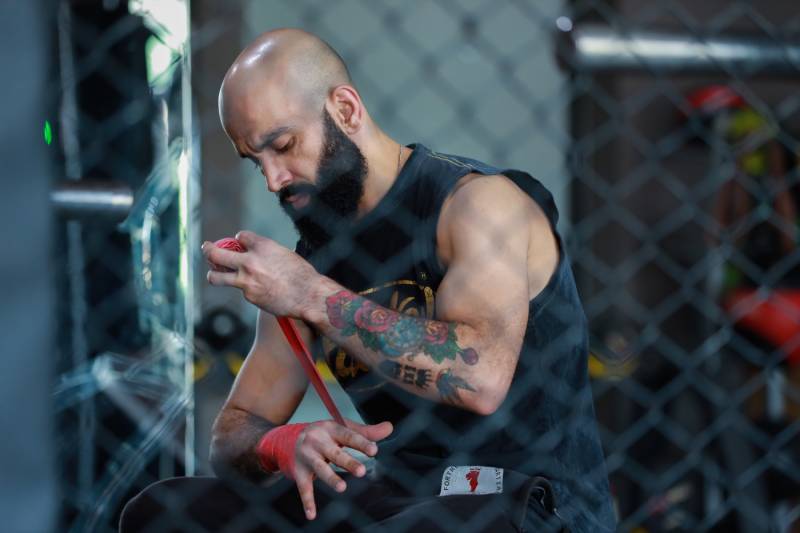 In a country where there’s so much cricket obsession, how did you develop interest in MMA fighting?

Well, MMA is very new as compared to Cricket. So new that the first MMA event was held a year before we last won the World Cup (in 1992). But I think that since fighting is a universal language, people can relate to it if presented the right way. Fighting doesn’t only mean physically fighting inside a cage or a ring; fighting is a human trait that naturally comes out every single time we stand up for ourselves, be it physically or mentally, in every situation.

With all that in our minds, we have been forever martial artists and right after getting our Taekwondo Black Belts, the coaches thought that they should come up with a system that is complete and caters to fighting from everywhere, which is when we found out about UFC and that turned our minds around. 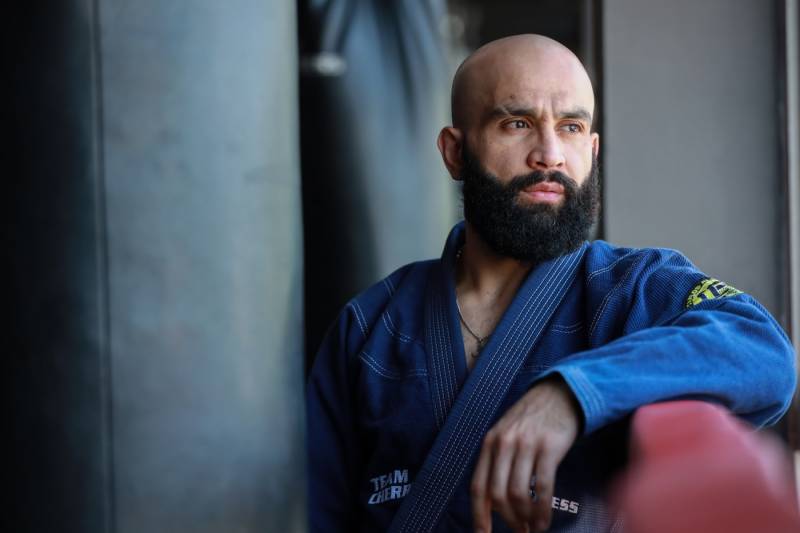 Personally, to me, fighting was the answer to the question that ‘Do we let life put us in a bad spot, punch us in the face and cry about it or do we get up, do something about the situation and deal with the issue?’ which is when I felt that this is what I want to do for the rest of my life.

How frustrating is it as an athlete to not get the same funds, recognition from government and other relevant authorities as cricket? Do you think there’s potential in this sport in Pakistan for the government to invest in it?

As I mentioned earlier, Cricket is a very old sport which is being watched and followed by countries from generations and if we look at any sport in the country, us all share the same issue against Cricket. It is not only the government but also private companies that invest a lot of money in cricket so we cannot solely blame the poor government for everything. Personally, as an MMA athlete (not associated with the government) I believe that it is our own responsibility to manage the funds by ourselves. The government can and should help by facilitating us in areas like visas or healthcare etc. I, speaking for myself, do not w a n t a n y m o n e y f r o m t h e government but I do need, want and ask for all the help from the government in terms of travel assistance and healthcare because getting visas for our fights without any hassle is one of the biggest things that the government can help us with and they should. 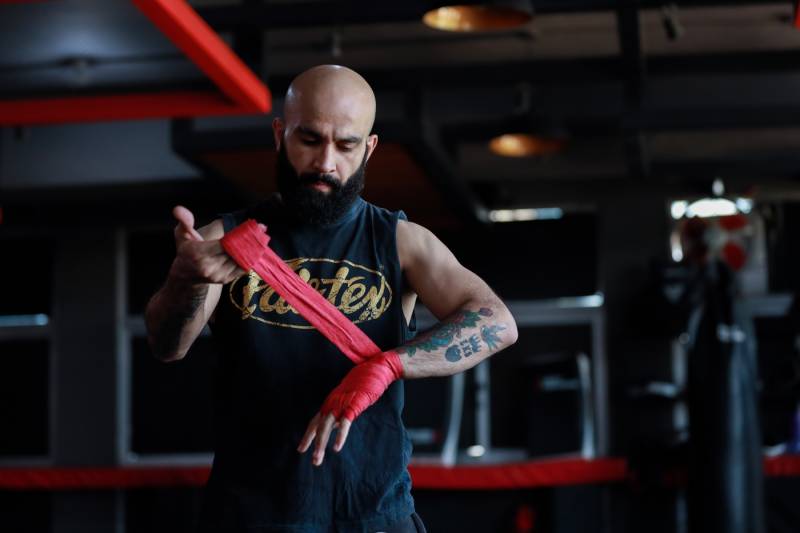 As far as potential is concerned, in a short period of 13 years, if we have put Pakistan on the international MMA map in the big organizations without any assistance or financial help from the government, that shows how hard we have been working and how much talent our athletes possess.

UFC and MMA are in their peak right now globally, how long do you think they can continue their success?

I think MMA is still evolving in itself so the sport is here to stay. Just like boxing, this sport is going to grow bigger and bigger.

Where has this nickname ‘Kratos’ come from? What’s the story behind it?

Our fight names are always given to us based on how we fight and how we act while we are fighting in the cage. If anyone has played the game God of War’, they can understand it easily. So, a teammate of mine once told me that I look like this game character Kratos (back when I had a goatee beard) and made a picture with half my face and half Kratos face. Then after my first loss, the way I made my comeback, the character of Kratos started feeling like me and it just stuck by. Over the period of time when I grew the beard, I saw the Kratos in the latest ‘God of War’ game also has a beard and is physically grown (Just. Like. I. Have). So yeah, that’s that! 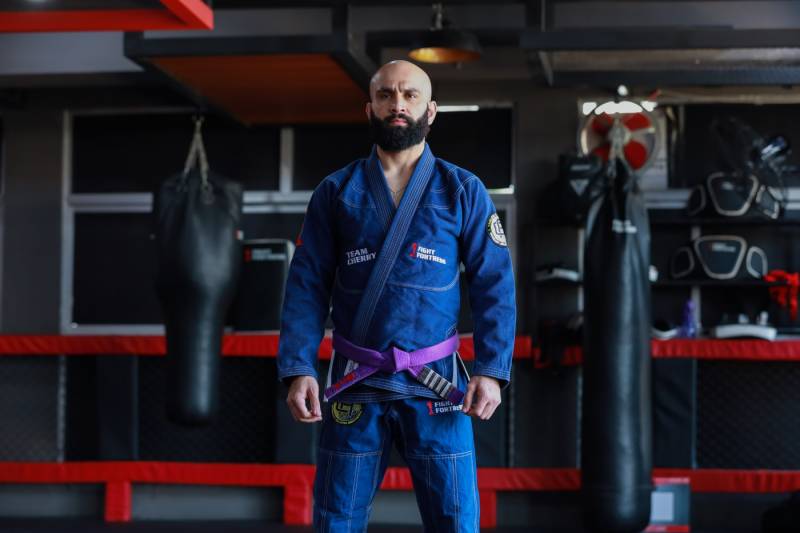 What’s your favourite strike/ submission to use in any fight?

We are mixed martial artists so we have to be good at everything so there isn’t really a favourite but I have always used my Axe Kick (from taekwondo) a lot so I’ll say it’d be that.

‘Fighting doesn’t only mean physically fighting inside a cage or a ring; fighting is a human trait that naturally comes out every single time we stand up for ourselves, be it physically or mentally, in every situation’

Who is your inspiration? If you could have one dream fight with anyone, who would it be?

I have always drawn my inspiration in life from my parents and the way they have lived their lives; selflessly. First, it’s them, then it’s my elder brother/ coach Ehtisham Karim.

I always had a dream of fighting this unbeatable champion Demetrius Mighty Mouse Johnson and would always tell myself that I’ll be the only one to beat him but seeing him lose has shattered that dream of mine (laughs). My journey of fighting is going to be full of adventurous fights so I don’t really wish to fight with anyone because I know I will be fighting them all. 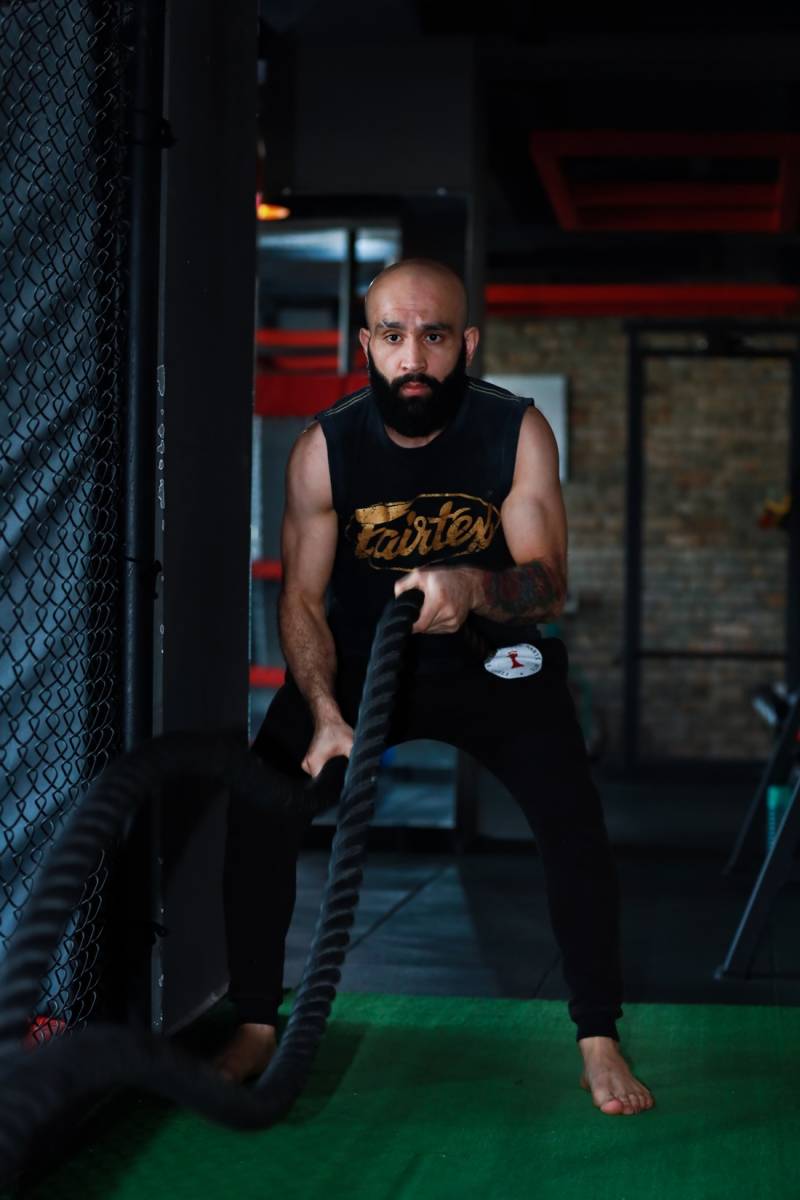 We hear that you also train other athletes. Are you currently training anyone or leading fitness or martial arts classes?

We, at Team Fight Fortress, welcome people belonging to any age, gender, walk of life, sport or background visit us and train with us f o c u s i n g o n t h e i r s t r e n g t h , conditioning, cardio and functional training. We offer classes for boxing, kickboxing, children’s fitness, Mixed Martial Arts, Brazilian Jiu-Jitsu and Self Defense to everyone who wants to come learn from us.

‘Just like all the greats in the world, I want to not only be remembered for my fighting career but also for the change we try to bring about in the society by teaching people the skill/art and also by helping them overcome a lot of their fears and work on getting rid of their addictions’

What do you want to be remembered for at the end of your career?

Just like all the greats in the world, I want to not only be remembered for my fighting career but also for the change we try to bring about in the society by teaching people the skill/ art and also by helping them overcome a lot of their fears and work on getting rid of their addictions. Fight Fortress has been more than just an academy to the people that train there. It is a safe place and an escape for everyone where they come, train, get in the right state of mind and then find the answers to their problems in their everyday lives.

What does it mean for you to be a fighter?

Being a fighter, on the outside, looks very glamourous and fancy that we get to travel the world to punch someone in the face but the reality is that we have to sacrifice a lot for what people see on screens. We skip birthdays, have to miss weddings of loved ones, have to skip on funerals of our loved ones because we have to be at the gym and train. We cannot eat whatever we feel like or want to when we have to make weight before the fight. We have to sacrifice our family time because we have to make sure we don’t skip training or else we will lag behind and that could cause us losing the fight. So many things that we have to put aside, all these things make us have discipline in our life, prioritize and have laser like focus.

Being a fighter does not only represent our physical attributes but also our character, discipline and hard work.

What’s next for Uloomi Karim?

The top, Insha’Allah. I have had a rough patch of couple of years lately but there’s always a bright sunny day after a dark night. I have been working non-stop and I know for sure that greatness awaits!