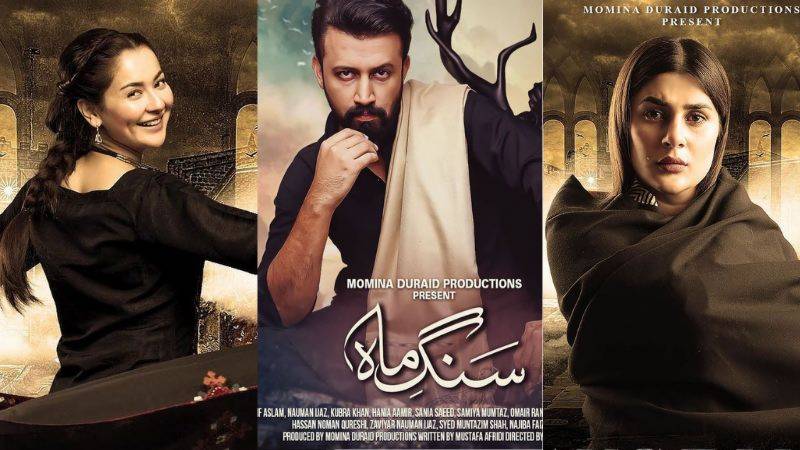 With its dark, psychosocial theme, it differs from the traditional saas-bahu narrative we’ve been accustomed to streaming on screen. The show is said to be focused on child marriage, drastically normalized nowadays. As such, it hopes to shed light on this situation and create awareness, in the attempt to change the mentality of masses.

Hum TV aired its first teaser for Sang e Mah, the sequel to the award-winning Sang e MarMar and it arguably has the whole country wrapped around its finger. The teaser introduces the cast for the drama leaving people in shambles; the renowned singer Atif Aslam plays the lead in the drama. Fans of the artist had been waiting for Atif’s comeback since his last appearance in Bol, a film with Mahira Khan, in 2011. Atif Aslam was not only trending in Pakistan but also in neighbouring countries.

The teaser sparked a flame, yet again, in those viewers, who were left disappointed at the unexpected ending of the last serial. The show had told the narrative of a Pakhtun family and it was nothing short of an emotional rollercoaster. Although the much-awaited drama is a sequel to Sang e marmar, its director is said to have revealed that the story features something not previously seen on the Pakistani screen.

The drama appears to be set in a village and encapsulates the traditional music at the start of the teaser, courtesy of Atif Aslam. The rhythmic progression of the tabla and rabab leaves us in a total trance. This reintroduction to Pakistani instruments brings back the love for cultural music, especially in the era of Western dominance.

While the cast of the drama remains the same, there have been some additions including Zaviyar Ijaz, who will be acting alongside his father, Nauman Ijaz. The power lead duo, Atif Aslam and Hania Amir have the viewers on edge, as it is the first time the duo will appear on screen together and the chemistry between the two is much anticipated.

The power cast sets high standards for the drama and after the success of Sang e MarMar, viewers expect nothing but a new perspective of the storyline, something far from the love-triangle cliche seen in numerous serials, like Hum Kahan Ke Sachay, all while keeping us on our toes.

Hania Amir responds to overwhelming backlash in hopes of inspiring ...