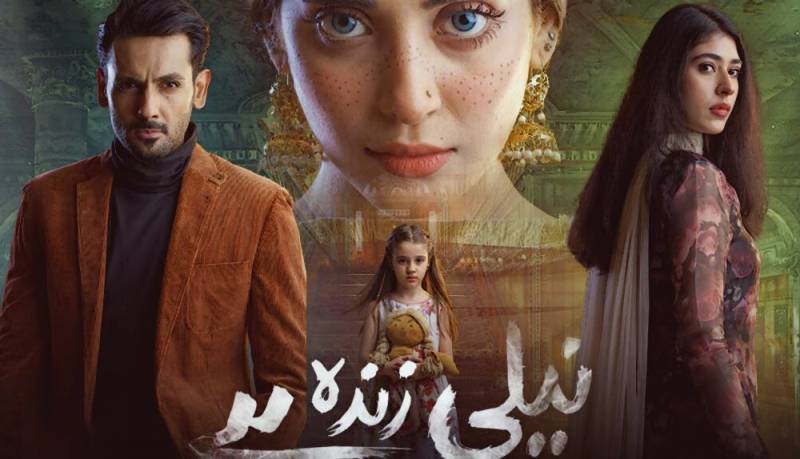 ‘Neeli Zinda Hain’ is a horror drama that was released on 20th May 2021. The drama mainly revolves around the drastic life change that happens after a couple, ‘Aman’ and ‘Sumbul’, decide to move into a new house. Once they move into the new house, things change for the worse beyond their usual problems. The drama has a similar feeling to ‘Haunting of Hill House’ and delves deep into human fear and societal norms. All of these elements paired with beautiful cinematography, makes this one of the best horror dramas in the industry.

One of the problems this drama heavily talks about is childbirth and the taboos regarding it in our society. In the first episode, it is revealed that ‘Aman’ and ‘Sumbul’ have a mute daughter named ‘Minal’.‘Sumbul’ recently went through a stillborn birth which immensely affected her, yet her mother-in-law gave her no slack and seems to hate her immensely. Later on in the series, her mother-in-law ridicules her for giving birth to a stillborn and a mute child, to which ‘Aman’ replies that children come from men’s fate, not from women. ‘Aman’ is played by the talented Mohib Mirza and ‘Sumbul’ is played perfectly by Sonia Mishal. ‘Minal’ who is mute is beautifully played by a child actor Tehreem Ali who portrayed the emotions beautifully without saying a single word.

This drama emphasized the trauma of giving birth to stillborns and how women are subjected to hate and even violence for not giving birth to the ‘right’ children such as giving birth to girls rather than boys. On the other hand, another aspect of the drama highlighted the setbacks of long-distance relationships. ‘Aman’ spent around six years of his life in Australia and would visit his family once or twice a year, this distanced them and when he comes back it was hard for ‘Sumbul’ to accept him in the house again. Many times he can even be seen knowing very little about his daughter or his wife.

The horror aspect of the drama begins when they move into a new house. The house is a beautiful place and is supposed to be where the family can live together and rekindle their bond, but sadly that doesn't happen. There is a spirit attached to the house named ‘Neeli’ who is played by Urwa Hocane beautifully. The spirit herself has a tragic backstory and has an attachment to ‘Minal’ which only adds to the havoc.

‘Minal’, because she is mute, is unable to communicate these situations with her family. The horror only increases when ‘Neeli’ targets ‘Sumbul’ and makes their life a living hell. Their haunting targeted everyone to extreme lengths and made them helpless because their situation was inexplainable to the outside world. Another thing that only added to their turmoil was the ‘black magic’ that the mother-in-law was getting done on ‘Sumbul’. The mother-in-law character was played by Kinza malik. She showcased immense talent in portraying the roles as the talented actor she is.

The hatred for ‘Sumbul’ depicted by her mother-in-law in hopes of keeping her son with her, shows a scary but true reality of our society. This drama is one that does horror in a good way and does not overdo it. The cinematography, the supernatural, and the real societal problems all make this a thought-provoking and scary horror drama that is relatable and based in our country. This is one drama that can be watched over and over again, and it will pack a punch each time. If you are a horror fan, this is a must-watch.