Divided by a long border, united with humani… nothing 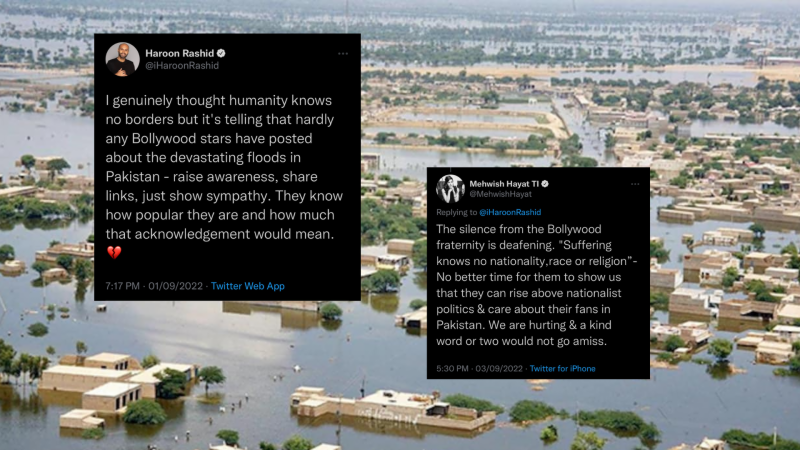 One out of third Pakistan is under water, millions of houses have been destroyed, people are forced to live in relief camps as they have nowhere to go, pregnant women are in dire need of medical care, hundreds of children died, crops are destroyed, infrastructure collapsed and if I’ll start counting all the damage, it will take hours so let’s jump on to the main thing.

From all over the world, people are donating as much as they can, and states are contributing millions and billions to provide relief to all the victims. Politicians are arranging telethons to collect billions in donations to help and support the victims. It is one of the biggest catastrophes we have faced in decades.

Hundreds of actors, models, and public figures all over the world came out to support Pakistan in this difficult time, collected donations, provided food, tents and everything they could to make their life a little safe and tried to fulfil their nutritional requirements. The least they could have done is to raise awareness and they played their part successfully.

On the other hand, the superstars of our neighbouring country, having millions of followers, are quiet and showing no interest in the devastating condition we are facing. It’s a very saddening situation and our very own Haroon Rashid and Mehwish Hayat used the public platform to highlight this issue.

But the question is, can we force anyone to talk about something if they don’t want to? No, we can’t! We’ve to give space but the border, our history, and politics should not come in between while taking a step for humanity and speaking about something where the life of millions of people are on the line. The least they can do is to write a few words in support of all the flood victims, but why would they do that? Their country is safe, and no one cares if their neighbouring country is facing a natural calamity leaving millions of people homeless.