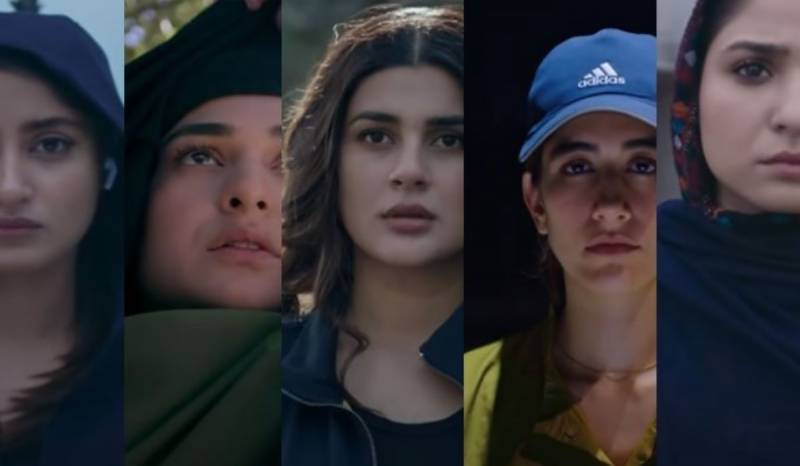 Caption: SINF E AAHAN: SPOILED BY A PSEUDO PASHTUN AND AN ISLOO BURGER?

No Warning, For No Spoilers (You’re Welcome)

Indeed, we appreciate this drama dedicated to the Women Of Steel owing to a handsome duo: five female leads and no male gaze! (Oolala, what a tease!) Written by Umera Ahmad, Sinf e Aahan had set expectations soaring to skies yet unseen with its trailer launch on November 19, 2021. But did the series itself surmount or succumb?

Surrendering every ounce of sugar-coating, we - women - have a soft spot for this series, but this does not blanket its divisive aura. It impresses us with its social tropes typical of South Asian societies but depresses us with some acting - or call it casting and characterization; the pseudo-Pashtun and the Isloo burger, to be specific. One wonders why the creators couldn’t - or didn’t, do we hear a conspiracy? - cast a native Pashtun and a gori gone Pakistani to glorify as the Women of Steel within Pakistan’s army.

Call us overcritical, but have yourself contemplate: how can audiences idealize a character constantly chasing self-serving, hyper-individualistic glory - that too with an accent announcing Islamabadi Burgerism. As such, how can audiences empathize with an elitist surviving on the Dunya of Instagram and Twitter - hey, Ali Rehman said this, not us! Whether this problem pertains to the casting, script, or actor, we are unsure. But it sure does not befit the ISPR’s (Inter-Services Public Relations Pakistan)  purpose of praising the Pakistan army’s feminization, for we witness a character far from the ranks of a role model. However, we hope Ahmad’s writing and Khan’s acting transmute our skepticism - after all, umeed par duniya qaim hai!

Since the story switches from each of the five female leads across a 37-minute long serial, our Isloo Burger isn’t afforded enough airtime to ruin the show altogether. But, in another scornful manifestation, Shaista Khanzada (starring Yumna Zaidi) and her pseudo-Pashtun accent spare no second to piss us off - excuse the informality! But don't get us wrong: we appreciate Zaidi for mimicking - or at least trying to mimic - a Pashtun accent in fulfillment of her role. But the accent appears far too faulty to be taken seriously and even distracts audiences from her open battle against patriarchy. This repercussion reinforces itself with the rest of her family - be it her sister, mother, brother, or grandmother - evidently unwilling to emulate the Pashtun identity. Consider this: would one expect a White guy to play a Black guy? No, right? (We sure do hope your answer was no!) Similarly, why must one have a non-native Pashtun play a Pashtun? Such underrepresentation within the media mirrors their wider underrepresentation in Pakistani society. The same can be said for Arzoo (starring Syra Yousuf): a Christian girl played by a non-Christian.

Nevertheless, it would be unfair to suggest that Sinf E Aahan is discredited by two characterizations alone. Instead, we cap its commendable attempts at representing the Pakistani populace - at least geographically - its dil ko lagne wale dialogues, socially woke storyline, and aesthetics, all while upholding its main narrative of glorifying females within the army!

Cola Next’s Latest TVC Is All About Women Empowerment And We Are ...