Team Akhtar or Team Niaz? The “National Hero” Or The “Nobody”? 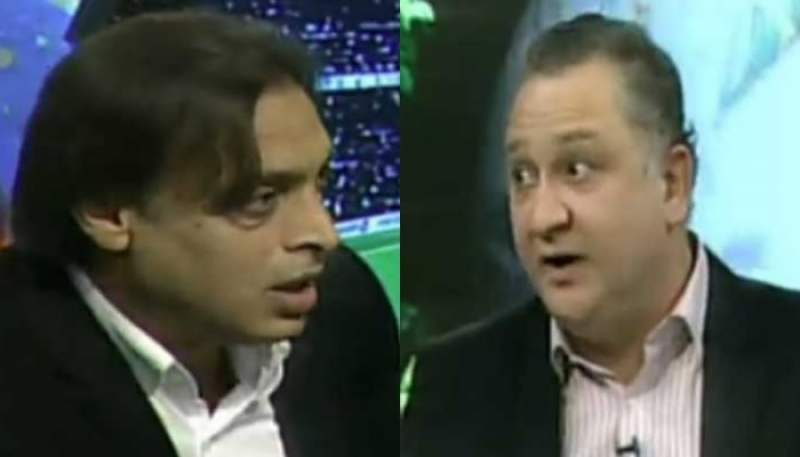 The Happening: A “Hard Exchange Of Words”?

On Tuesday, October 26, 2021, Akhtar and Niaz found themselves falling out on PTV Sports’ show, “Game on Hai.” With Akhtar as the panelist, among others, and Niaz as the host, the two zeroed in on Pakistan’s triumph over New Zealand. Here, Akhtar’s remark on how Pakistan Super League’s (PSL), Lahore Qalandars, had rooted talents like Haris Rauf and Shaheen Afridi, roused a rather paranoid Niaz.

“You’re being a little rude and I don’t want to say this: but if you’re being over smart, you can go. I am saying this on-air,” Niaz retorted, cutting Akhtar mid way and cuing for the next guest to comment.

As the argument heated up, the live broadcast sought a commercial break. But even upon its recommence, Akhtar was palpably perturbed. Shortly, he took off his mic and soon took off himself too.

To audiences therefore, Akhtar appears not to have uttered hard words for Niaz, at least on air. So does that exonerate him from all blame?

Multiple clips are circulating on social media so I thought I shud clarify. pic.twitter.com/ob8cnbvf90

In Akhtar’s defense, it was an “unpleasant” occurrence, with Niaz allegedly acting “obnoxious,” as he called on him to leave for “no rhyme and reason.” Justifying his jab at damage control, he said, “I tried my level best to repair the damage [in] the programme,” by requesting an apology, but Niaz’s refusal naturally led him off the show.

Seeing the fast pacer pace to pacify the feud and Niaz’s woeful wilfulness, turns the tables in Akhar’s favour, making us less likely to run his reaction as an overreaction. But what about Niaz’s?

Niaz’s Comeback: The Calm Before The Storm

I wonder why one has to be reminded @shoaib100mph is a star. He has been the best of the best, he shall always be. He has brought laurels to the country is undeniable. One side of the story always attracts nonetheless having been friends for ages I’ll always wish him the best.

His tweet may have revealed him as relatively calm, but it surely roused storms lit by backfire:

Your tweet is even more stupid, than what you did there on live television. You are unprofessional and arrogant and you need to be sent home.

Since the incidence, #NaumanNiaz has been trending on Pakistani twitter, surpassing 12.6k tweets, only below #Aryankhanbail #fftb #shahrukhkhan. Here, netizens appeared quite nuance with their views:

Some recommended hitting up the Pakistan Citizen’s Portal (PCP).

My complaint to Citizen’s portal as an overseas Pakistani. If You all do the same, we can ask PTV to ask for Dr Naaman’s resignation. pic.twitter.com/KHLdz5KECK

Others took matters into their own hands, hitting Niaz with personal blows.

You are a low life person Mister. @shoaib100mph pe teray jaisay lakhon Qurban, You should resign and leave PTV.

Matches are won by players like Shoaib not because of you and one more thing I want to say “do hell with you analysis”. #NaumanNiaz https://t.co/HbERBchViL

Some took to sacred texts.

Others found haven in Abraham Lincoln (although, he isn’t quite the saint we’d cite, but chalo)

Nearly all men can stand adversity, but if you want to test a man’s character, give him power - Abraham Lincoln @shoaib100mph #ShoaibAkhtar #NaumanNiaz pic.twitter.com/JXORxIeKNd

And some exposed Niaz’s anchoring ethics, or lack thereof.

#NaumanNiaz blocked me in the 1st PSL season for passing very controversial comments, check the conversation, this man should not consider himself bigger than the legends comes in his program. 1st there are too many guests then he does not let others speak. #ShoabAkhtar was right pic.twitter.com/4J7BOXnNzG

Is PTV being prejudiced?

As of October 28, PTV announced its decision not to air either Akhtar or Niaz until a formal inquiry had come to a complete end.

Well thats hilarious.
I resigned in front of 220 million Pakistanis & billions across the world.
Is PTV crazy or what? Who are they to off air me? https://t.co/514Mk0c64e

However, while Niaz may have been unaffected, Akhtar was certainly angry as he questioned, “Is PTV crazy?”

His anger was reiterated by PTI Senator, Faisal Javed, who remarked, “PTV.. you are completely off track… Restore the legacy #Respect

But How? Investigation Is At An Impasse:

The inquiry committee claimed it’s recommendation to take Niaz off-air came after interrogating him. But Akhtar refused to appear before the committee, calling upon it to settle for the available video footage, instead. So is Akhtar culpable of delaying the television justice he himself is demanding?

From celebrities, to sportsmen, and siyasatdan, all appear standing with Akhar, as evinced in the thread below:

Really applaud the grace shown by @shoaib100mph. He handled the insult heaped on him with so much maturity and patience. Anyone else would have probably lost his cool on air but this guy maintained his dignity. Signs of a good upbringing #sheerclass pic.twitter.com/BHQVO7boZW

Our national heroes have put us on the world map for years…#ShoaibAkhtar is our cricket Legend, I am absolutely appalled at the misbehaviour & disrespect shown to him by a tv anchor, no justification whatsoever!
Sir, we respect you & THANKYOU for your services to Pakistan! 🇵🇰

Our personal favourite, however, was Muneed Butt’s Instagram story 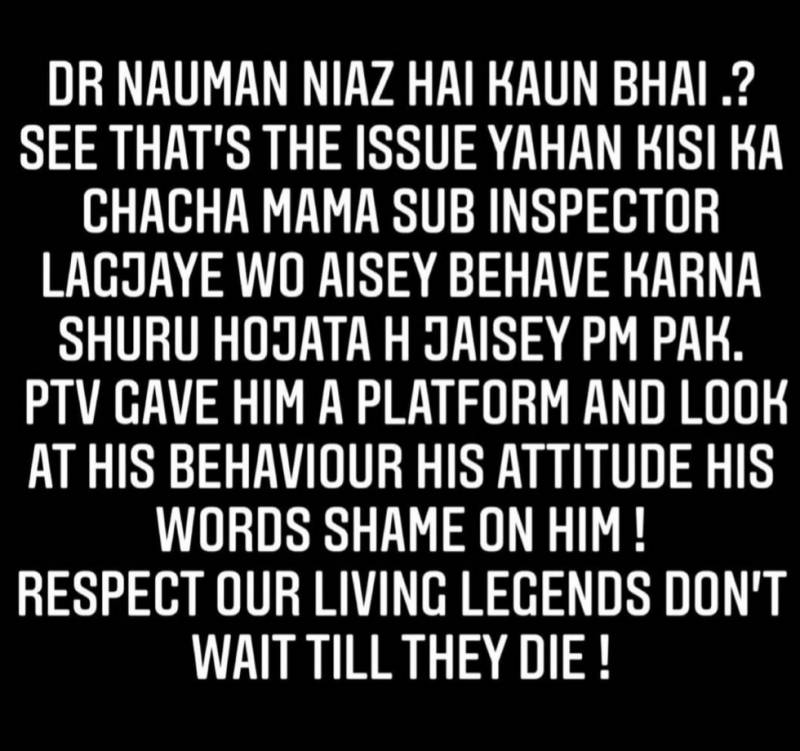 Next, we’ll proceed with the politicians’ response:

We as a nation seeking apology from Sir Shoaib Akhter.
He who exalted us with pride، The Living Legend, The Speed Star, The Rawalpindi express.

We’ll cap it all with the cricket fraternity’s reaction:

Sikander Bakht, former fast bowler, spewed hate at Niaz for picking a bone with Akhar, that too, during a live transmission. Deeming Dr. Nauman “a nobody,” he said, “I stand with Shoaib Akhtar.”