Renowned singer Rahat Fateh Ali Khan has been awarded with an honorary degree by the University of Oxford. He was among eight other individuals who received their honorary degrees at the ceremony. 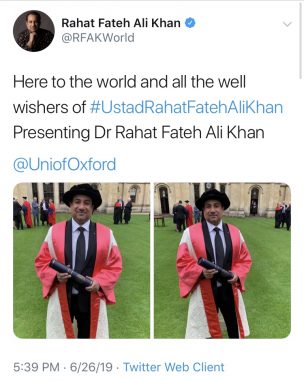 "This will be a very special day for my family and I, but also for my fans, who have shared this journey with me. To be presented with this honour is a massive achievement and I am happy that my music has allowed me to reach such incredible heights.”

Rahat, will lead a performance at the Oxford Town Hall tomorrow, wherein his family legacy and his career would be explored. Funds from the event will be donated for the enhancement of the Faculty of Music’s Sounds of South Asia series.

In 2017, Oxford University named one of its rehearsal rooms to honour Rahat Fateh Ali Khan, making him the first South Asian artist to receive such a tribute.

In 2016, Rahat Fateh Ali Khan was presented with a lifetime achievement award by Oxford University. He then became the first Pakistani to have received this honour.

He also attended a talk alongside Pakistani education activist Malala Yousafzai about representing Pakistan in music globally. Watch the exclusive clip below:

Malala Has Been Accepted to Study at Oxford University

Malala Tweets About Her First Day At The University of Oxford