#WhenInKarachi: The Sights And Sounds It Has To Offer

How many places have you looked at in your life, but never really seen?

The concept of this video is to portray the lifestyle of the millennial generation. It emphasises self-discovery and exploration of one’s roots and in the process attempts to portray the country in a positive light.

The abstract story line of the video follows two characters, Zahid and Sabrina, through a journey titled When in Karachi. Zahid’s character, true to his actual identity, is from Islamabad and Sabrina is from Karachi. Both have travelled outside Pakistan but even though both of them live in Karachi now, neither has seen what Karachi has to offer. 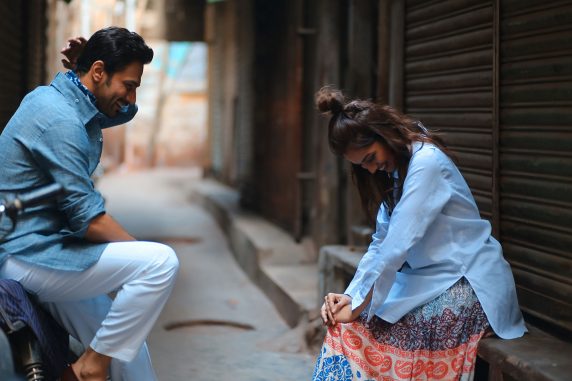 This is the first time that Zahid and Sabrina have given Karachi the chance and are surprised because they can’t help falling in love with it.

Amir Adnan’s Spring 2018 collection, “Dawn”, is the basis of this campaign. Dawn – representative of the onset of daytime is usually synonymous with lighter tones of ascending skylight. This particular collection showcases morning hues of whites along with blacks, browns and dark purples from the night before. 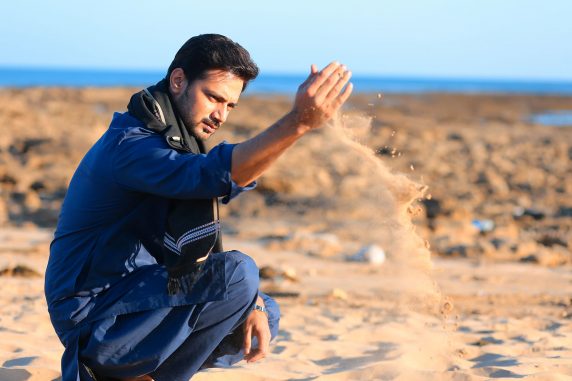 The cut of the suit drapes the body with grace, but also exudes richness and class that comes with the subtle embroideries. In addition to the cut, the collection also puts emphasis on layering as a major trend for this year. Living in a hot climate does not mean that we must restrict ourselves; it simply means that we must adjust a little. In order to do so, all the layers that are seen in the various looks of the video are created using very thin material and unstructured, unlined garments that are breathable, non wrinkling and non restrictive, therefore, ideal to travel in. 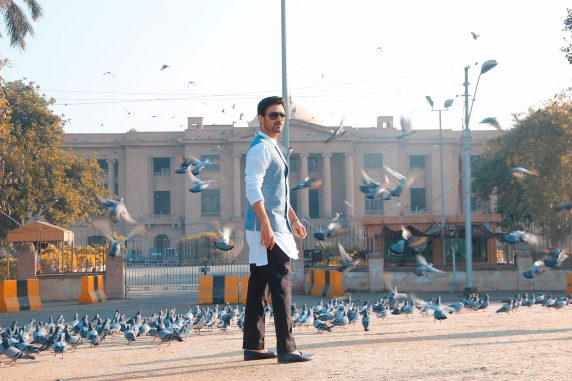 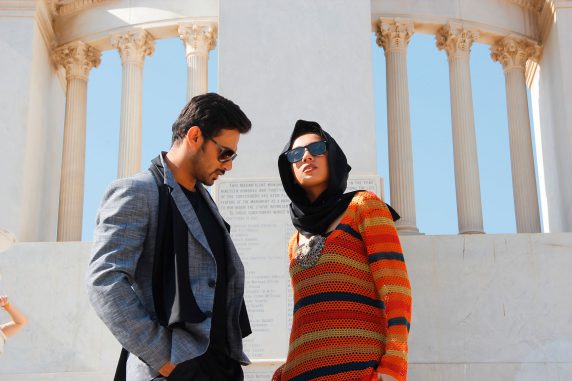 Inspired by history, the embroidery seen in Dawn involves rediscovering things and ideas that were thought to have been buried away. 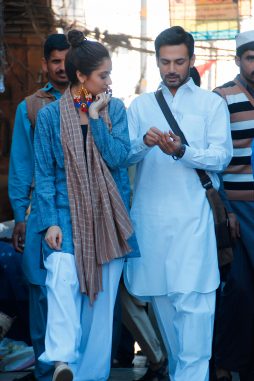 The designer believes, fashion exists within yourself, and in order to find yourself you must travel. The concept again being highlighted that you do not need to go far from home to travel, instead you just have to change your perspective a little. 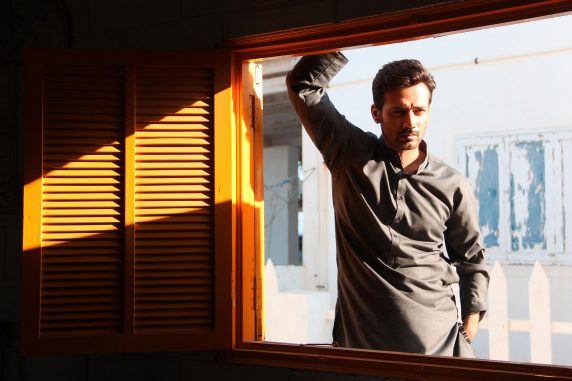 It is true that the closer you are to something, the less likely you are to see it. So take a step back, because changing your perspective changes your experience.

Last but not least there are the actors. Zahid Ahmed, Pakistani theater, television and film actor and heartthrob, is the face of Amir Adnan 2018. He made his Television debut in 2014 with a show called "Mehram" on Hum TV a premium Pakistani channel. Since then he has consistently appeared in several other successful TV series while portraying vivid and unique characters. He made waves across the country with his portrayal of The Quaid-e-Azam Muhammad Ali Jinnah in theater plays penned by national legendary playwright Anwar Maqsood.

His most recognized qualities are his natural acting, and wide range of expressions that made him a perfect fit for “#WhenInKarachi”.

Sabrina Furqan, an aspiring model who has previously modeled for Huma Adnan and Fnk Asia, was the leading lady with Zahid Ahmed for this campaign. Sabrina fell in love with the idea of exploring her own city and was most excited about working with director, Parishae Adnan. The character that Sabrina plays in “#WhenInKarachi” was built around her independent and headstrong personality.

On Sunday the 21st of January 2018, a team of enthusiastic, young and highly talented professionals embarked on a 15 hour long shoot that covered over 8 locations in Karachi from Pigeon Chowk, to the Beach. With only the director, Parishae Adnan’s vision in mind the team was told the following: to be invisible. This meant no artificial lighting, no staging, no posing, no stopping. The photography from the key visual to all the campaign shots were done in natural lighting throughout the day by the talented Ariaana Khan and Mustafa Ilyas. Similarly, the videography for the campaign video was also done in natural lighting by the Internal Affairs team. While the actors, Zahid Ahmed and Sabrina Furqan explored the streets and monuments of Karachi, the team of “#WhenInKarachi” was responsible for documenting their emotions and their journey of self-discovery.

The day started at 5 am in makeup. Sabrina and Zahid were both sporting a chic natural look with messy hair to show that the characters put in an effort into how they looked however, did not look artificial. Very much like the filming and photography teams, the makeup artist, Imaara Dharani, too was part of the bandwagon from dawn till dusk as no lighting, no staging, no posing meant that the actors had to look good throughout the day in all lighting conditions.

After the initial looks were created, the team hopped into a coaster to the first destination: the Super Savari Express office. From where they took the local tour bus and travelled through the streets of old Saddar, Karachi. Super Savari Express is a tour company showing you around the alternative and unseen sights of Pakistan for the FIRST time using local and ethnic modes of transportation. They believe in reclaiming the nation one city at a time through their social movement, encouraging Pakistanis to take pride in in their cities and to show the world Pakistan’s cultural heritage.

Every location shot at featured a different outfit but with the rule of no stopping, the team created a makeshift changing room at the back of the Super Savari bus where the actors Zahid and Sabrina quickly changed outfits and did their makeup touchups before getting off the bus at the next location.

In totality the shoot lasted 15 hours, and ended at the Beach. Having spent that much time on a bus full of enthusiastic people with one vision really makes you understand how well a synergistic team works. With everyone on the same page, giving input and shaping the look and feel of the outcome, the project was an immense success even before the footage was seen.

The team behind the video:

The talented team that created “#WhenInKarachi” consists entirely of the millennial generation. The makeup artist, Imaara Dharani, is Karachi based and a graduate of Chic Studios in LA. She has also spent time at Toni and Guy in London mastering hairstyling and haircutting techniques. She loves to experiment with bold looks but swears by the natural, no makeup looks which were featured in the video.

Ariaana Khan and Mustafa Ilyas were the official photographers for the shoot and it was their love for photography that made them both perfect for the job. It is very challenging, especially in this day and age, to find good photographers who are comfortable working with natural lighting, outside of a studio, without heavy reliance on Photoshop. However, both Ariaana and Mustafa managed to beautifully capture the essence of the campaign through their respective films.

Ariaana loves the idea of freezing time and capturing it through her lens while Mustafa loves to capture the romance that life has to offer through his.

Marium Masood, another talented young woman who works as a digital marketing manager and does editing as a freelancer, came on board to help the team edit the video. From the first assembly to the final cut, she brought together a sequence of shots that told a story with particular attention to detail. She also helped the Internal Affairs team solidify the concept and worked with them to make this project come to life.

The videography, direction, and production were taken care of by Internal Affairs. Parishae Adnan directed the projected with Faizan Siddiqui as her assistant  director.

Internal Affairs is the in-house production and marketing team at Shapar Pvt. Ltd, headed by Parishae Adnan that consists of Faizan Siddiqui, Ambreen Zehra, Muzzammil Ali, and Shazaib Ghori. All young individuals who believe that synergy is the driving force behind exponential growth.