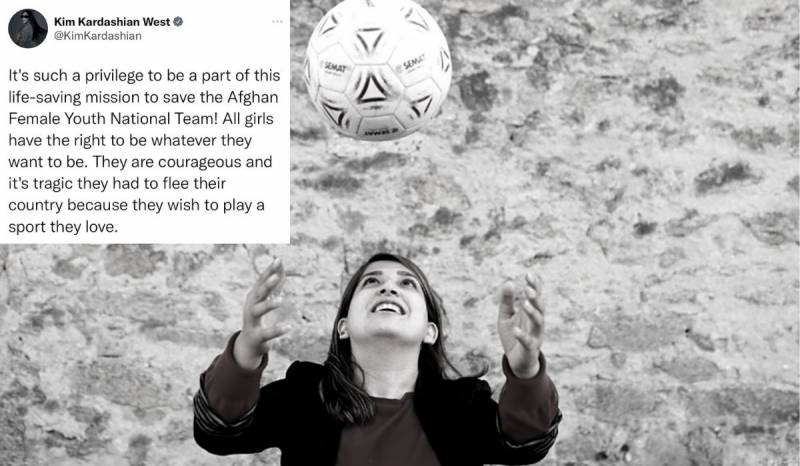 As of November 18, 2021, Kim Kardashian and Leeds United rallied to rescue an Afghan women's football team fleeing the Taliban. This involved funding a flight landing 130 people - 30 teenage players and their families, to be specific - from Pakistan to Britain. They are expected to quarantine for ten days before commencing their new lives in Britain, sponsored by Leeds.

Former captain of Afghanistan's national women's team, Khalida Popal, expostulated, ‘The Afghan female footballers are well-known figures in the country… Their lives were in great danger because of people in the country who opposed their activism and wanted to stop their sport and educational activities." Some of the girls were beaten, had their houses burnt down, and had family members "taken" by the Taliban.’

While the players had entered Pakistan, they required support to enter Britain. Upon receiving their visas, teammates Narges and Sabria said, ‘Our lives have been saved and we are eternally grateful to all.’

However, as a spokesperson for Kim K revealed how the star and her brand SKIMS had sponsored the flight, one wonders whether this corporate social responsibility program pounces for publicity?

Simply because this sensation has a stellar record of recording her life doesn’t mean her charity lacks charitable intent. Instead, it's imperative to highlight how her commitment to social causes has far outnumbered her 72-day union with Kris Humphries.

In 2013, she became the face of Haiyan Typhoon relief. Buttressing an auction on eBay, Kim K kindly committed 10% of all earnings to the causes caring for its victims. But this is the case with 10% of all her earnings, for it ends up in charities. In the very same year, her family held a yard sale, promising all the proceeds to the Greater Los Angeles Fisher House Foundation and No Kid Hungry. She also visited an ailing fan, Alissa, via Make-A-Wish Foundation. Indeed, critics may allege that 2013 was the only year Kim K was kind, but this is far from reality.

In 2015, Kim and, now-to-be ex-hubby, Kanye donated a thousand pairs of shoes from Adidas’ Kardashian Kollection to Soles4Souls. And in a feminist victory, helped grant former sex slave Cyntoia Brown clemency, in 2018.

Chronological timelines, however, cannot do justice to recounting this Kardashian's ever progressive stances on humanitarian issues. Not only has she used her platform to platform awareness on the Armenian Genocide, allegedly executed by Turkey, but also taken to supporting transgender persons’ rights, in addition to routinely volunteering at the Children's Hospital of LA.

Hence, one may question, so what if Kim K records her contribution? The fact that it remains consistent and conscientious means she’s successfully contributing to social care - be the end goal publicity or not.

First Transgender Going To Work In Ministry Of Human Rights

Kim Kardashian and Kanye West Expecting Baby No. 3 via Surrogate!

Afghan Refugees Allowed To Stay In Pakistan For Another Year