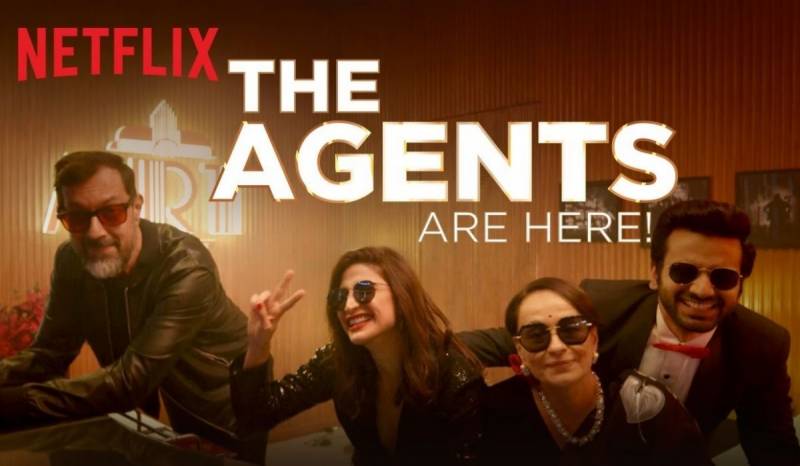 Disclaimer: this piece reflects the opinion of the author; it is not representative of public or publishing opinion.

It is no wonder that my critique of Call My Agent Bollywood caps one of its last few lines: ‘chal ek buri si picture dekhte hain,’ for it is a cringey, carbon copy of French comedy, Dix pour cent, lit, ak.a Ten Percent. But, ‘What could be more Bollywood than a carbon copy?’ (Suchin M, 2021)

I’ll tell you: a miserable, misogynist imitation, in the name of adaptation, cashing on lesbian love, incestual ideals, clumsy cameos, and some “struggling stars” whom Bollywood can’t bear, but Call My Agent apparently can. Generous or gamblers - whatever their casting intent may be, it amplified everything bad with the show, so there’s no winner. What makes it lose - so brutally, might I add? The show’s thaki hoy thematic execution follows on its circus-like setting, scattered storyline, ailing aesthetics, and some sorry representation slash characterization. But rather than stretching this list for as long as its writers, Hussain and Abbas Dalal, stretched the script (oh how agonizing it was to sit through six whole episodes) let's dive right into the themes themselves.

The incestual fling featuring Nia (starring Radhika Seth) and her stepbrother Sid (starring Raghav Lekhi) essentially starts as a naive relationship that tries and - expectantly - terribly fails to insinuate incestual undertones. With a discrepant lack of screen time afforded to both characters, they fail to follow up on the episodic tragedy that the two can never be together when their father, Monty (starring Rajat Kapoor) reveals their siblinghood. To the audience, it felt as though they were never really the slightest bit serious about each other, so why accord their romance so much screen time?

As far as struggling actors’ cameos are concerned, Lara Dutta’s and Dia Mirza’s stood out as sorry excuses to stagecraft, for they failed to evoke even the slightest bit of empathy, or sympathy for that say. We want to bless them with the benefit of the doubt, but seriously why was Dia Mirza suddenly sword fighting in some sandy seawater? Why was Lara Dutta emotionally drowning because of her kid who doesn’t even classify as a newborn? Indeed, we admire Ila Arun’s raw honesty when admitting her struggle to Mehershad (starring Ayush Mehra), but then again, why aren’t male actors shown struggling? Is it a piece of cake for the men of Bollywood or do they make it come off as cake? The answer lies in sexism scornfully - and not subtly - screenwriting Call My Agent Bollywood.

With infidelity, all we can say is that the stars, be it Soumyajit Dasgupta (starring Tinnu Anand) the insignificant, or Morty and Amal, the alleged show carriers, are carnally caught up with their hormonal reactions. But keeping their libido leak aside, let's focus on the other agonizing elements:

Is it a set or a circus? What’s with the red ripping our sight and hence, sensationalizing the struggle of tolerating this show, to begin with. It resembles the boat bar in Dil Dhadakne Do, where the song Girls Like To Swing was shot or maybe a rundown, rejected version of Bombay Velvet’s set. It also reminds me of when Kalank would place elaborate backdrops behind Roop Chaudhry (starring Alia Bhatt) and or Bahaar Begum (starring Madhuri Dixit), in its sorry attempts to impress Sanjay Leela Bansali!

The show filters in - allow me to correct myself, forces* in - shots of Mumbai to placate the audience that they’re based in Mumbai. Ok, even Emily in Paris wasn’t this obsessed with showcasing the Eiffel Tower - and she was a tourist! Even the music fails to befit the narrative built on ‘Bollywood is a shit show, it's failed...It's a jungle out there. Either you hunt or get hunted.’ Instead, the only thing the show has preyed upon is our precious time.

THE ACTING: OH, IT BURNS!

Amal is loud and crass. Morty seems weirdly distressed. Nia is in her bubble: always smiling, is she high? The show’s fourth agent Trease (starring Soni Razdan) is barely present: it's emblematic of ‘Two And A Half Men,’ for here there are three and a half agents, so here are our two-cents; rename the show Call My Agents: Three And A Quarter!

Even though an adaption, Call My Agent Bollywood is not at all apt, rather a mockery of an imitation. Here are some simple, very succinct pain points I had: the six-episode series failed to convey a climax, with the ending entirely inconclusive. I am yet to digest the following, of course, only if and when I overcome the aftertaste of watching this time waste: What happened to Monty's son and wife? Didn’t Monty’s receptionist have a thing for him? Why was the auditor like a monitor licensed to barge into any room?

As these go unanswered, I would much rather no longer contemplate Call My Agent Bollywood. The show is, as its last few lines suggested (when surprisingly referring to some other film and not itself), ‘ek buri si picture.’

Jeewan Hathi: A Dark Comedy Guaranteed To Make You Laugh Out