Half Hour With Ameer Gilani

Watch out for this new talent!

What are you currently working on?

I am reading scripts right now, I have not signed anything yet. It’s a little tricky since it’s the start and I don’t want to rush into things just for the sake of it. I am a lawyer as well so I am focusing on my legal practice on the side.

What did you think you would grow up to be when you were a kid?

I have always wanted to be a hero on-screen but I never knew that I would actually end up in this field. I thought I’d be a cricketer. Studying was never my thing.

What brought you to the world of acting?

I’ve always been fascinated by movies, actors, their stardom. I used to mimic actors, whether be it be their scenes or dances. Everyone in my family called me ‘hero’ since then, so I feel like it’s always been there.

Which Pakistani actors inspire you and why?

There are so many but one such actor is Fawad Khan, who believes in quality over quantity, which is something that I would do as well.

What do you enjoy doing more, acting or modeling?

Both have their pros and cons but I am inclined towards acting.

A favourite actor of all time?

There are so many talented actors; Johny Depp, Leonardo Dicaprio and Tom Hardy to name a few.

Three movies you’ve loved since you were young?

That’s an interesting one and there are so many! The Dark Knight trilogy, Shutter Island and Andaaz Apna Apna. Quite the variety.

Your favourite drama serial and why?

I love Friends and Sherlock.

If you were asked to star in a film, your ideal role would be?

A role that has all shades of a true human being, from romantic to mad to vulnerable to heartbroken, the list goes on, not something black or white. Something very grey and realistic.

My parents and sister.

A plain white or black T-shirt with blue jeans.

Describe yourself in one sentence

Simple, hardworking and passionate. If I have a set target, I don’t let go until I achieve it.

Three most appealing qualities in a woman?

Intelligent, carries herself well and has a lovely smile.

Your motto in life? 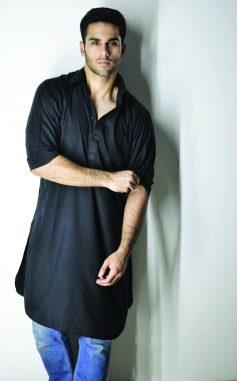 RAPID FIRE ROUND WITH MAN OF THE HOUR - AMEER GILANI

Sarwat Gilani: Joining Hands For a Good Cause