Muhammad Ashiq: An Olympic Cycling Champ To A Rickshaw Driver in Lahore

A few days after the heart-warming story about the former Pakistani Olympian Muhammad Ashiq who became a rickshaw driver to make ends meet started circulating social media, Netsol Technologies Limited has offered to hire the 81-year-old. The company announces the new addition as a 'member of the NetSol family' on their Facebook page. 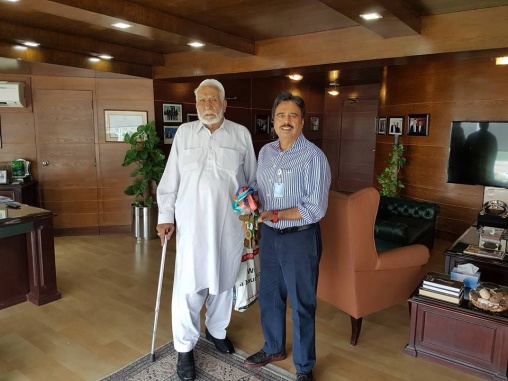 (Muhammad Ashiq, a former cyclist, who represented Pakistan at both 1960 & 1964 Olympics; winning Silver and Bronze medal at 1958 & 1962 Asian games respectively, is now a member of the NetSol family. His current designation is, National Sports Ambassador. This is a proud moment for NetSol and an inspiration for our nation. PHOTO: NetSol Technologies Limited)

About the former Olympian:

The old man who has been forgotten but has not forgotten...

He looks at his awards and trophies that he had once won in a cycling career for Pakistan and claims to remember those days clearly. Though, the rest of the nation may have forgotten him or even his existence - he holds on to his memories close. With a heavy heart, he tells AFP,

“Perhaps most people think that I have died,” he laments. “I just recall that I have shaken hands with… former Pakistani prime ministers, presidents, chief executives”.

He remains in awe and wonder at the thought of how easy it is for 'them' to have forgotten him. A man who once was the pride of the nation, who competed for Pakistan at the 1960 and the 1964 Olympics, is now a rickshaw driver in Lahore.

He began his sporting career as a boxer, later moved on to cycling due to his injuries. He was known to have competed in Rome and Tokyo in the '60s. Though he didn't win any medals, according to him being a part of the sports and representing Pakistan was victory enough.

However, when his cycling career ended, so did his fortune. Alternating between jobs, he settled as a rickshaw driver in the bustling streets of Lahore. Currently residing alone, he leaves a rather bittersweet message for the poor to never participate in sports. An Olympian, the Nation's pride, a hero who once represented his country now wishes for to depart this world. Disappointed with the country and its people he says,
“I pray to meet my beloved wife in heaven. I think it is better to avoid this pathetic situation I have endured,” he says.

Perhaps, his story is a lesson for all of us to value our true heroes, to never forget them and though they may not be screaming for our attention it is our right to keep them alive in our hearts and minds.

Want to add to this story? Leave your feedback in the comments below!
Share:

Uber Driver Asks Model Nyakim Gatwech If She Would Bleach Her Skin ...

THROWBACK 2020 - WINNING ADVICE FROM SALMA MARWAT KHAN ON MAKING IT ...