Amongst the many people who noticed her was Imran Raza Kazmi, one of the producers of the 2016 movie Janaan. Recognising the potential in Hania, he wasted no time in approaching her for a role.‘Honestly, the first time he called me I was convinced it was a prank call. I had never thought about acting in a movie. The videos I posted on Instagram were all for fun. I was a BBA student and my education was my only focus back then. That was however, the biggest turning point in my life so far. There has been no looking back since then.’ Her performance in Janaan confirmed the fact that she is here to stay. With her spectacular comic timing, convincing acting skills and great on-screen presence, many might argue that she is too good too soon. We sat down to chat with this new fireball of talent on a chilly winter evening, to find out more about her experience in the industry so far, future plans and what she’s like at home. 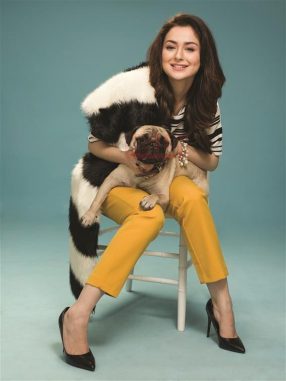 Do you have any formal training as an actress?

None, whatsoever. As kids, my cousins and I would imagine ourselves in different scenarios and act them out, but that’s probably something most kids do. I did a few plays back in school as well, but I think the biggest role I’ve ever had was that of a tree (laughs). I never really thought about taking up acting seriously and no one in my immediate circle had ever even noticed that I could act! My videos on Instagram were purely for fun and to entertain myself. 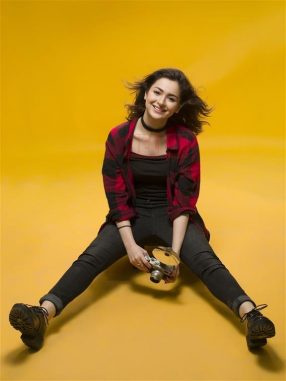 You’ve got a lot of success at a very young age. Do you ever worry that could hinder your growth?

I try not to think about the negatives and focus only on the work I do. I do realise, however, that it’s very easy to get sucked into all the glitz and glam, which is the only thing that can affect the quality of your work. Somewhere along Janaan, I felt I was going in that direction too, but then I reminded myself that I can never lose my sense of self. It’s very important to stay grounded and not let the fame get to your head. I want to remain as real as I was before people knew me. I’m sure you have a lot of crazy fan stories.

(Laughs) You have no idea how awkward I get! Just today a man walked up to me and insisted I sign a five thousand rupee note for him! I don’t know how to react to these things. Before I started acting, people used to ask me if I was ‘the Hania Aamir from Instagram,’ I used to find that very sweet but didn’t know what to say except ‘yup, that’s me.’ 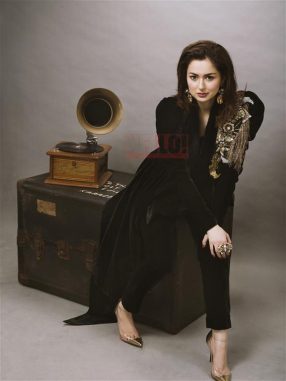 Which actors do you look up to?

Ali Rehman is one of the most focused people I’ve met so far. He is completely unaffected by his surroundings and is always fully absorbed in his character. I got to learn a lot from him. He’s perfected the art of zoning into his character like it’s his reality. Another actor who I look up to is Ahmed Ali Akbar. Once during a scene, I got really upset because of the amount of retakes I was being asked to do. He took me aside and reminded me that

the audience has no idea what goes on behind the scenes and only cares about the final result. His words really calmed me down and have stayed with me. From the girls, I think Sanam Saeed is absolutely fantastic. I’ve never met her in person, but admire her because of her great acting skills. She’s one of the most versatile actors we have right now and delivers each and every dialogue of hers convincingly. Internationally, I love Deepika Padukone and Jennifer Lawrence. 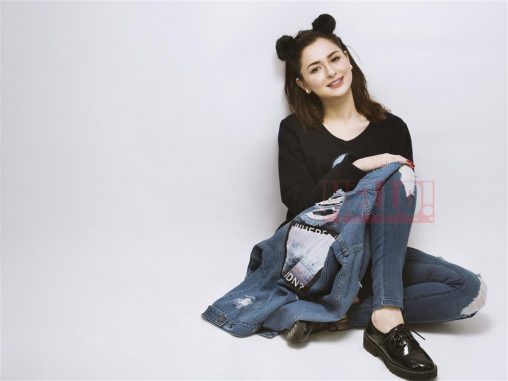 Tell us about your experience of working on Janaan.

Everyday was a party on set. I look back with such fondness; I know that this movie will always stay close to my heart. Since this was my first time in

front of the camera, I was naturally very nervous, but everyone made sure I felt comfortable. Imran Kamzi, one of the producers was my first

friends in the team. He was exceptionally sweet and even came to pick me for my audition. Hareem Farooq and Osman Khalid Butt also guided me through every step, making sure I eased into my role.

Is there any particular incident you look back at and laugh at?

One of the first scenes I had to shoot was with Usman Mukhtar, who played my fiancé in the movie. We had to hold hands and act like a couple in love. I didn’t know him too well and I had never shot such scenes before so I was super awkward! I couldn’t face him for the next week! Now that

we’re friends we laugh about it all the time. 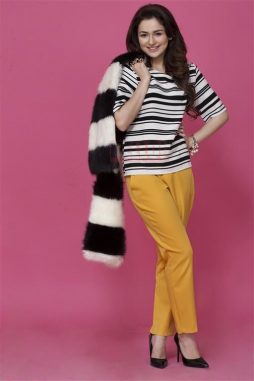 Just like she is outside home! I don’t like acting like a celebrity, that’s not the way to live. I live with my mother and younger sister who I’m extremely

close to. The three of us are each other’s best friends and support system. The only time my mother gets mad at me is when I get back home from work feeling tired and unwell! Like all mothers, she gets upset and reminds me to prioritise my health!

I love watching animated movies at home while devouring my mother’s home-cooked food. Her daal and saag are my favourites! I would also like to

hit the gym more often as soon as I get the time.

What is your dream role?

Honestly, I want to do it all! I want to play the girl-next door, the negative character, the crazy character everything! The only thing I’m particular about is the fact that the roles I play should have some depth and leave a mark on my audience. It is important to me that the roles I portray have some meaning and I understand them. I know if that doesn’t happen I won’t be able to do justice to it.

Where do you see yourself in the next ten years, both in your professional and personal life? Is marriage on the cards?

Right now I’m working on a couple of television serials, along with a movie Parwaiz-e-Junoon opposite Hamza Ali Abbasi and Osman Khalid Butt. We’re going to start filming soon and the movie is slated for release sometime in 2017. My aim is to continue working harder and carve a niche for myself. I want to be recognised for my work and not just be known as a pretty face! I have only just begun and have a very long way to go! On a personal front, I can’t predict where I’ll be in the next ten years since I’m only 19 right now. However, yes, of course, I do want to get married eventually, just like all girls my age do. When I settle down though, I want it to be with a man who understands me and my work. I want a companion who I can travel with and who respects me for who I am.

This driven and focused young actor knows exactly what she wants and has dedicated herself to achieving those goals completely. With such determination and ambition, Hania’s fans can be assured that she’s here to stay and is all set to deliver quality work. After having won so many hearts so soon, we can’t wait to see Hania continue to shine in the years ahead!