The Duchess and Duke of Cambridge introduced the newborn to the world yesterday.

The smiling couple couldn't hide their excitement while waving to the crowd. 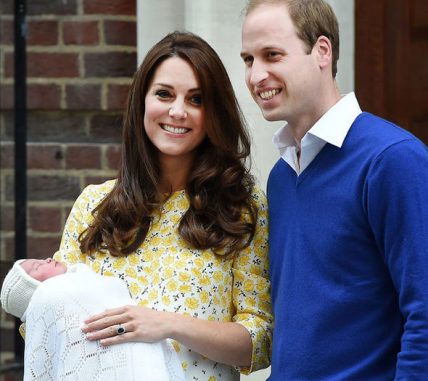 Kate, who was holding the new Prince of Cambridge, stunned those outside the Lindo Wing with an amazing red Jenny Packham dress with a contrasting white collar. 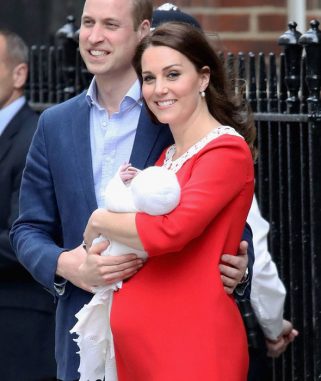 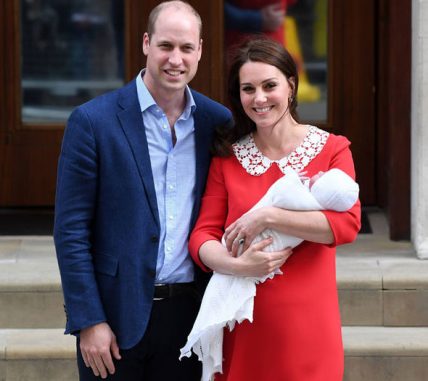 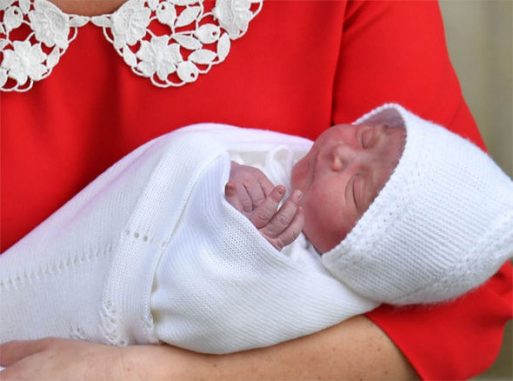 She looked in good health after giving birth this morning to her as yet un-named prince, who is fifth in line to the throne.

While the happy couple was posing for pictures, baby Cambridge, wrapped up against the cool spring weather, could be seen moving his tiny fingers.

After entering again the premises of the St Mary's, William, Kate and the baby approached the car set to drive them to Kensington Palace, where the Middletons and other relatives of the couple are likely to be waiting for the newly-born.

Prince William took the time to joke with the crowd and reporters. Holding up three fingers he said: "Delighted, very happy. Thrice the worry now." 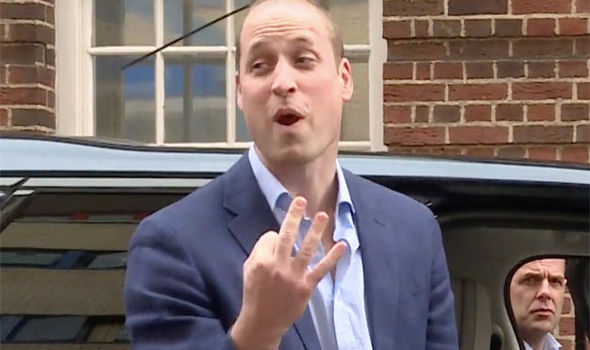 He added: We didn’t keep you waiting too long this time."

The family left the hospital at 5.56pm.

Earlier three cheers were given by fans donned in union flag outfits and holding their own royal babies following the announcement of Kate's new baby boy.

Prince William was by his wife’s side when their royal baby was delivered by staff at the London hospital.

The Queen, along with Michael and Carole Middleton, Prince Charles and Camilla have been told of the news.

Kensington Palace announced the news on Twitter, writing: "Her Royal Highness The Duchess of Cambridge was safely delivered of a son at 1101hrs."The baby weighs 8lbs 7oz.

"The Duke of Cambridge was present for the birth.

"Her Royal Highness and her child are both doing well.

"The Queen, The Duke of Edinburgh, The Prince of Wales, The Duchess of Cornwall, Prince Harry and members of both families have been informed and are delighted with the news."

The Queen missed the arrival of the royal baby as Her Majesty was photgraphed horseriding on the grounds of Winsdor Castle around the time of the announcement.

Prince George and Princess Charlotte paid a visit to the Lindo Wing to meet their new baby brother. 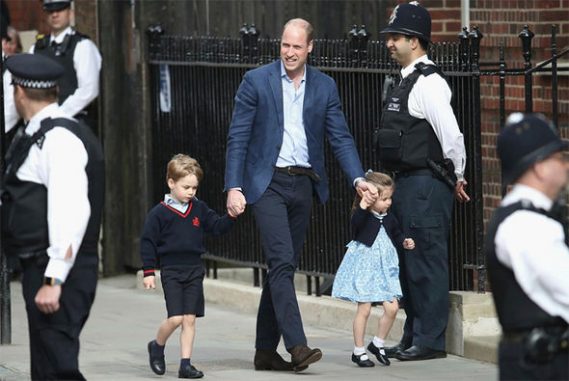 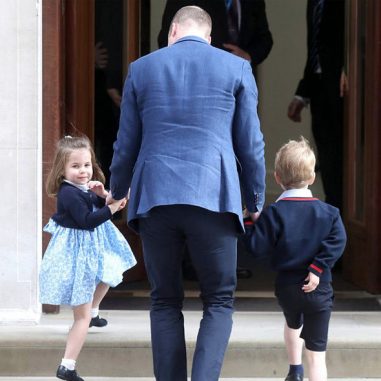 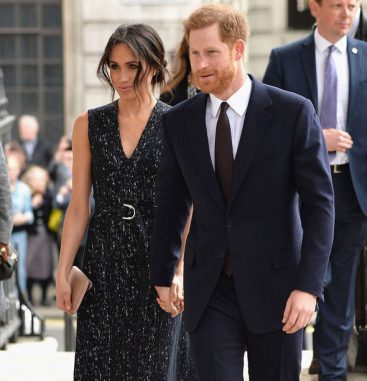 George, dressed in blue shorts, a white collared shirt, a blue pullover, long blue socks and black bar shoes, was given a reassuring a kiss on the forehead by the Duke.

A large Union Flag has been raised over Buckingham Palace and a State Standard over Windsor Castle to mark the birth of The Duke and Duchess of Cambridge's third child.

And an easel has been placed outside Buckingham Palace announcing the baby news. It will remain there for 24 hours. 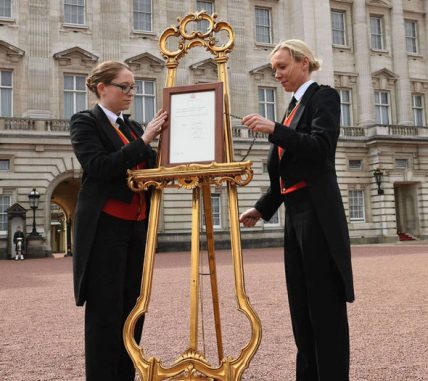 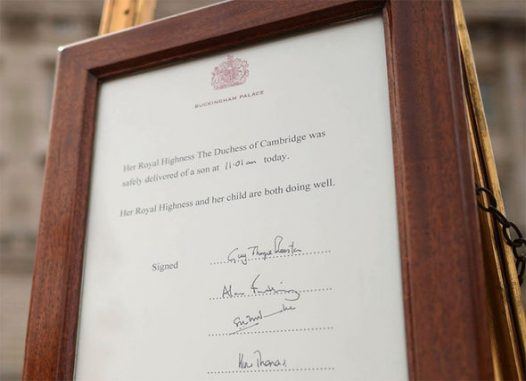 The practice of posting a bulletin outside the Palace announcing a royal birth has gone on for at least as long as Buckingham Palace has been the Sovereign's official residence - since 1837.

Westminster Abbey announced their bell ringers will ring a full peal tomorrow in celebration on the latest addition to the Royal Family.

Warmest congratulations to The Duke and Duchess of Cambridge on the birth of their third child. The Abbey's bell ringers will ring a full peal of Cambridge Surprise Royal, starting at 1pm tomorrow, in celebration."

The King’s Troop Royal Horse Artillery and The Honourable Artillery Company will also each fire celebratory Royal Salutes at 2pm in London tomorrow to mark the baby’s birth.

Theresa May has joined well-wishers as she sent her "warmest congratulations to the Duke and Duchess of Cambridge on the birth of their baby boy."

The Prime Minister added: ”I wish them great happiness for the future.”

Meanwhile the Mayor of London Sadiq Khan tweeted: "On behalf of Londoners, I want to send our warmest congratulations to the Duke & Duchess of Cambridge on the birth of their baby boy."

The Royal Navy and the BT Tower also shared messages of congratulations to Kate and William.

Royal Navy sailors and Royal Marines on board the HMS Albion formed ‘boy’ on the ship’s flight deck and shared the photograph on Twitter.

Meanwhile BT Tower flashed “It’s a boy” in a blue banner after the news from Kensington Palace was announced.

The London Eye will also light up in red, white and blue later tonight at around 8pm in celebration of the royal baby boy.

The arrival of Kate’s stylist Natasha Archer provided a hint that the announcement of the baby's birth was imminent after she was photographed leaving the hospital.

Ms Archer was spotted getting into a Land Rover escorted by a police officer at around 11:30am today.

A team of top medics was also on stand-by in case of an emergency.

The new royal baby has been born on patriotic St George's Day which celebrates the patron saint of England, and arrived just two days after the Queen's 92nd birthday.

All of three of the Duchess of Cambridge's children have weighed more than 8lbs.

But the new prince is not the heaviest royal baby in recent years.

That title falls to Savannah Phillips - the daughter of the Queen's grandson Peter Phillips - who weighed 8lb 8oz in 2010.

The new baby was heavier than both Prince George and Princess Charlotte. Charlotte, at 8lb 3oz, weighed slightly less than George's 8lb 6oz - but was still above average.

The newest arrival is the royal couple’s third child and will be welcomed by big brother Prince George, four, and two-year-old sister Princess Charlotte.

The Duke and Duchess Of Cambridge Announce Baby Due Date

The Duke And Duchess Of Cambridge To Visit Pakistan Next Week

The Duke And Duchess Of Cambridge Have Arrived In Pakistan