Mansha Pasha: From Childhood to Now, Finding her Place in Acting

Here's a quick sneak peek into the glamorous life of the award-winning vibrant actress, Mansha Pasha. A dreamer who talks about her love of telling stories, acting and much more...

Did you always know you wanted to be an actress? How did it all begin for you?

I started off wanting to be part of the performing arts in some way when I was a kid. I would be the heroine of the book I was reading or the movie I was watching. I would feel their emotions and could lose myself in their lives. Once I grew up, I was still interested in media and arts but wasn't sure if I wanted to act. I completed my bachelor’s in media studies and starting working behind the camera. I started getting offers to act pretty soon and once I started acting, I started enjoying it like I did when I was a kid and knew that I wanted to do this. 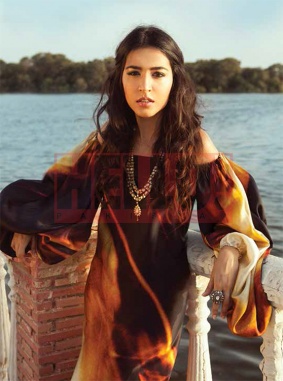 Tell us about your childhood.

I am the youngest of three elder sisters and we had a great deal of fun! I grew up fancying Jane Austen’s romances and stories of suffrage alike. I remember this one instance when my sisters got it into their heads to cut my hair (themselves!) I had barely any left on my head!

Who is Mansha Pasha?

I’ve always considered myself a dreamer of sorts. As a kid, I spent most of my time imagining and conjuring up different stories in my head, where I was the damsel in distress or the adventure-seeking daredevil. Not much has changed in that respect now that I have grown up. I’ve become more realistic, but who doesn’t love to dream?

What do you enjoy most about acting?

The stories. I love telling stories, playing different characters. It allows me to see life through someone else’s eyes and gives me perspective. Acting definitely makes you a more empathetic person.

Among the roles you have played so far, which is your personal favourite? Why?

I’ve loved all the roles I’ve played but my favourite is definitely Sidra (Zindagi Gulzar Hai) and Aliya (Mohabbat Subha Ka Sitara Hai). Both were challenging in their own way but unique too.

You’ve played a few negative roles during your career. What do you enjoy most about playing them?

I like how the characters do something wrong and ultimately realise the consequences of their actions and grow from that. That realisation is something very interesting to play and something I think everyone can relate to.

You just won an Award at the HUM TV Awards. How does it feel to have won such an award at this stage of your career?

It feels great! I didn’t expect it, but was very glad to be honoured and acknowledged in the company of the greatest artists of Pakistan. It was an extraordinary and truly humbling moment.

Something no one knows about Mansha Pasha?

I’m an extremely clumsy person! I often bump my knees or stub my toe against tables and such and even bump into people! I am not very organised, I wish I was, but at the same time, I love being spontaneous. Still looking for a happy medium there!

Local/International actors you draw inspiration from?

Playing a very interesting female protagonist who has many facets to her personality in a project that is hopefully showcased around the world. Playing a famous female historical character would also be amazing.

Did you enjoy reading this feature? Leave your feedback in the comment box below!