Comprising of Shahzad Raza, the maestro stylist and make-up artist and Ather Zahoor, the fashion photographer whose eye for detail pioneered an entire genre of fashion photography, the duo loves good fashion. They have pushed boundaries and set higher standards for themselves and provided inspiration to stylists and fashion photographers for years. Creators and mentors of supermodels and superstars who have achieved icon status, they’re the masterminds behind few of the most extraordinary shoots that are etched in any fashion enthusiast’s memory. 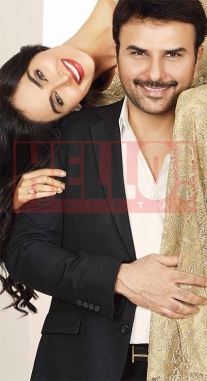 Relentless in their pursuit of perfection from the very beginning, they made a name for themselves through sheer hard work in a time when there was no social media and it was hard to get exposure and made a mark on the industry through their distinct signature – classic glamour. ‘Honestly, it’s just hard work. It was also luck – actually hard luck [laughs] because there was nothing at the time. We started everything ourselves and built it from the ground up. We got the opportunity to do that, so it was also luck to some extent – it matters a lot. It was really tough, but we enjoyed ourselves; we were very young.’

‘We like to maintain our brand and its image – we became a household name shortly after we started off. People used to get in touch with us at that time without a website. ‘

We’re still managing because of our sheer hard work. We have not just created supermodels, but also helped build some of the most prominent designers’ brands – we believe in larger than life – doing something big. We could have kept going with our initial, small set up, but we wanted to go big.’

‘In an industry where jealousy is one of the most commonly felt emotions, Ather and Shahzad have been a force to reckon with that has only gotten stronger with every passing year. ‘We get along really well – we’re like brothers. Like any other business partners, we argue a lot, but each of us compromises when needed.’ Ather asked Shahzad to be the face of the brand because he’s very shy and wasn’t comfortable with facing the camera and appearing at meetings.’

Another pioneering milestone that Ather Shahzad managed to achieve very early in their career was styling and shooting few of the most prominent celebrities in India. ‘At End of 1996, a designer approached us. We had started just three years ago. Fashion had become huge in Pakistan at that time – we were doing a lot of work and people were talking about it. The designer said, ‘I want to do something really big, but I don’t have a high budget’. We said, let’s go to India – at the time, the situation wasn’t very good between Pakistan and India and it seemed like a crazy idea, but we were eager to try. We sat down with the designer and keeping the idea of a shoot in mind, we came up with ten looks. We got the visa; we didn’t even have any contacts. We were scared, but excited.’

‘When we got there, we expressed our wish to work with Bipasha Basu (she had just won the supermodel contest), Malaika Arora, Arjun Rampal, Milind Soman and all the good looking and best people. Everyone thought it was an unrealistic idea. Upon our insistence, we were put in touch with someone we could show our portfolio to. When we showed our work to the stars, they fell in love with it. We hit it off really well and worked together and it was a huge success – our shoot got printed in all the major magazines. We didn’t want to work with nobodies and during our trip we thought, ‘what’s the worse that could happen; if nothing comes out of it, we’ll look at the sights and go back’ and we tried our best. After our shoot with these celebrities, we became very popular – in an interview, Malaika listed the cover we shot with her as one of her top ten favourite covers featuring her.’

When they started off, Ather Shahzad redefined the signature bridal look in the industry. They have successfully created customised looks for brides not only in Pakistan, but also internationally. ‘This place is like a designer salon rather than a usual salon where brides go and they all look the same. With our brides, we always create and customise the look according to the bride’s features, her jora, and her jewellery. We look at everything and then design make- up on every face. Today, it’s more about churning out brides like a factory, but we give our brides a lot of time and individual attention. When a bride comes to us, we ask them, ‘it’s your day, you’re not our model so you tell us whatever you like and we’ll start working towards it.’ By the end of the make-up, our brides are beaming Mashallah. We love doing bridals because it’s a different face every time. It’s more of a challenge. It’s hard to compare between fashion and bridals.’ 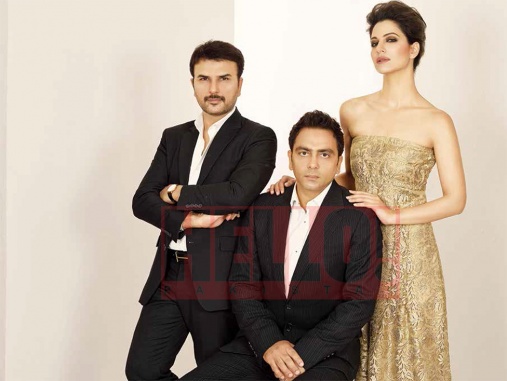 Putting the super in models and stars

The duo have discovered, mentored and groomed few of the most iconic supermodels in the history of Pakistani fashion. ‘With us, it’s a package deal – we tell them what to wear, how to dress. We give them an image, that’s why they’re supermodels. It’s not because they’re everywhere; it’s because of their attitude. They’re personalities – we show models how to style; which accessories to wear with certain clothes because we believe in good fashion.’

‘In the beginning, we chose girls randomly, but education and a good family background were very important for us – this was 23 years back. We used to look at their potential. If you look at them now, they’re all supermodels; they became supermoms. They were so patient and dedicated and used to work really hard. Nowadays, models want overnight success. In their initial training, we didn’t let the models go on the ramp. We used to train them – how to walk, how to stand, what expressions to give. When Iman came, she was a kid. She had baby fat; she used to say, ‘you don’t let me go on the ramp.’ After three years of hard work, she appeared on the runway and conquered it. Today’s models also work hard, but they’re lucky that they instantly become popular. In those times, it was a package deal – they were tall, thin and poised. Now, there’s no height, no body, no education, no exposure.’

‘One thing we don’t compromise on is confidence in front of the camera. For us, patience is very important. For example, Zara Peerzada is extremely hard working. Even though she’s not very tall, she has such a pull and confidence when she faces the camera, which makes up for it. It is because of this that she gets amazing offers – she is selective about what she does. Nowadays, models believe in quantity not quality. In those days it was the other way around.’

‘With us, it’s all about teamwork – we work together, we push each other. Almost all our models are happily married, they have kids and they come back to us and we give them work. We don’t look here and there; we focus and keep on working towards achieving our vision. If you’re giving something to someone with sincerity, it will always be rewarding. If you’re not doing that, you’re not an artist, but a machine. Of course, we all need money for living, but sincerity is important. If you have a good reputation, money will follow.’

Ather Shahzad are responsible for transforming the image of the most prominent celebrities of their time in Lollywood to the extent that they achieved legend status. ‘When we started off, Lollywood was doing really well. We had really pretty girls. After discovering glossies’ reservations about putting actors and actresses on the cover because of their image, we started grooming them – all the superstars of that era started appearing on the covers – not just women, but also men. We’re always happy to help anyone who comes to us and says that they want to be groomed and trained so that they’re styled perfectly – we’re perfectionists and we address every detail.’

‘When awards started happening in early 2000's in Pakistan, during the first five years in a row, we won every time. It was very overwhelming for the people and they had difficulty accepting it. So, in order to give other people a chance, we stopped submitting our profile.’

‘We think today’s stylists are lucky because there’s social media and you can do research on the Internet – you can look at beauty tutorials. In our initial time, there was nothing. It’s great that today’s stylists can gain exposure and popularity in a matter of months. It might sound clichéd, but art is inborn. When we look back, it was a very innocent time.’

‘We were the brand ambassadors for Pantene for three years. We were also associated with Luscious. We were the first stylists in South Asia to collaborate with a make-up brand – coming up with make-up. Meherbano is a friend and she came to us while she was starting out. We weren’t able to do it then, but after she started her brand, she came to us and asked us to come up with a make-up line. We had to think a lot and it was a serious commitment. We ended up doing an amazing collaboration, introducing make-up. It’s for the desi market, so we specifically designed the eye shadows and lip colours to work with our skin tones and our physiques because we’re not goras. There are a few projects in the pipeline, exciting ones, but we wouldn’t want to disclose them too soon.’

‘Always keep your personality in mind whatever you do for fashion – we believe less is more. ’

Enjoyed reading this feature? Leave your feedback in the comments below!