Hareem Farooq: On Shaping Your Own Destiny

She’s full of zest, lots of laughs, natural conversation and a sense of humor. Unlike many of the new generation actors I have met, she has the inordinate ability to be self-deprecating — which is a rare quality. I believe, to have a giggle at oneself is really the freshest and most endearing habit.

Hareem Farooq is also not an ostentatious person. She has a presence that is firm but quiet, a casual air that speaks of effortless attempts at style, and after spending an afternoon chatting to her in our hometown, Islamabad — where we had planned to meet since the place is loved by both — it was

refreshing to learn that she is also true to herself. Actress, producer and influencer, she is now a mainstay in Pakistan’s film and television industry. 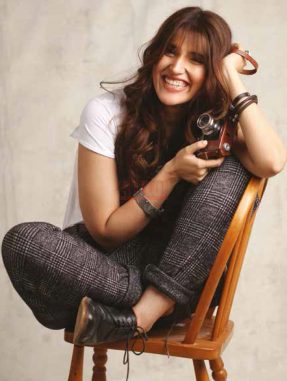 Hareem’s career trajectory is familiar to her fans; Google her and it will appear before you in flash, a repetition here is not required. However, her stand out appearances are many — television serials include Mausam, Mere Humdum Mere Dost, Dusri Bivi and Diyar-e-Dil. Besides TV, what makes her solid has been her foray into production. She counts her partners as the reason for her success in production: ‘Arif Lakhani, Imran Raza Kazmi and I are the core production team.’ While Azfar Jafri wrote the script for her latest film Parchi, her friend Osman Khalid Butt wrote it for her first film, the rather eerie horror flick Siyah (2013), as well as the feel good romance and family saga Janaan (2016). ‘Janaan was my first production project and while I was working on that, Dobara Phir Se shooting was taking place as well.’ She is full of praise for Mehreen Jabbar’s romantic drama set mostly in the USA. ‘Dobara Phir Se (DPS) was love — the only film out of Pakistan where the entire team were actually friends. Believe me, I

have experienced fallings out, and seen horror stories. We were lucky that we shared such a close bond. And it’s because of Mehreen for she only works with people she can be friends with!’ DPS was an amazing learning experience for Hareem and she applied it to her own production practice — things like the importance of time management and taking responsibility for one’s work. And it helped her in the production roll she’s been on lately: ‘ Parchi was in March 2017 and exactly after a year, I’ve now gone back to television.’ 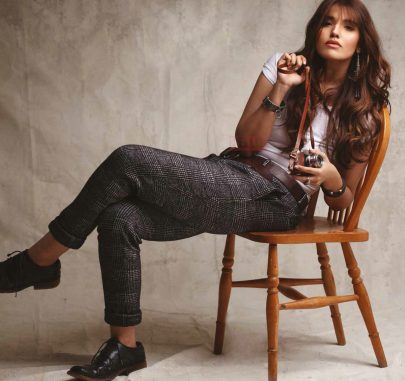 She is producing and acting in the play Main Khayal Hoon Kisi Aur Ka with fellow Islooite Ali Rehman Khan. ‘Before this, I wanted to take a break from television and spend my time in production — thus Parchi was a complete investment. So far, we’ve done three projects and all have had profits. Janaan and Parchi have been slated as the top 15 highest earning films of Pakistan!’ she reveals proudly. Her story goes as follows: ’It all began in 2009, Imran said that he would make a film and make a business out of it. He made Siyah in PKR 6 lakhs and that film made PKR 40 lakhs. With a cast of just seven people, we were able to make a successful film. Azfar realised that he was good with direction. And we became a team. Imran is extremely passionate about his work. All three of us have that chemistry, friendship and trust and I consider myself blessed. In the long run, our aim is to train people and develop professionals in the industry. It’s after years that I am back home and have set up my office in my own city. We are working on our next film script which we hope to start soon!’ Looking beyond borders, Hareem is clear that she would like her films to have a wider audience. ‘We focus on international distribution to show Pakistan in a positive light. We want to make international films with new crew, directors, technical talent and so much more. The aim of our production house is to create a platform and there are lots of projects in the offing. It is great to meet an individual persevering intelligently and satisfied with her work. Hareem is thinking ahead. ‘It’s time we start making unions, it’s high time — actors, directors, musicians — otherwise we shall never be united.’ 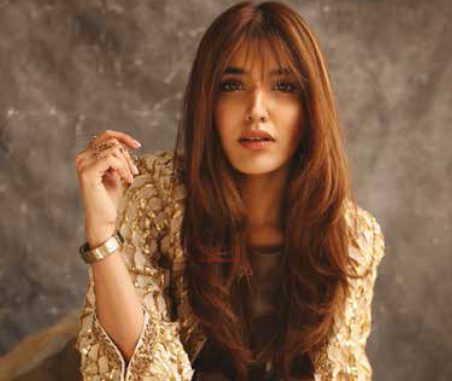 But the foray into entertainment has been an eye-opening experience for her. Her opinions reflect in her attitude towards her fame. ‘It’s showbiz. There is so much show around. Most of it is pretty on the outside — people, things, etc. You need to know the reality of it. This profession. You need to have a very strong support system and a very strong mind to stay grounded and to understand what is real.’ She continues. ‘The first thing I noted in the mainstream industry is that everyone is one is concerned about others. I am a firm believer — this is what I have been taught — that success cannot be achieved alone; other people are major contributors. It’s a give and take game and you can’t claim to have made it alone. Unless and until we don’t fully support each other, we can’t grow as an industry.’ 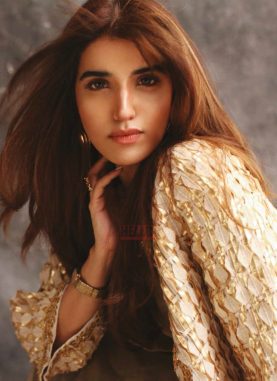 Her thought process is not ordinary and it is evident that the bigger picture matters. ‘This is all extremely temporary,’ she says. “Today, since I am here, why don’t I utilise the opportunity for bigger things. You have to consider how long you’ll be in this position — ballpark figure for me; maybe ten

difference. Being famous in this day and age is so easy! You’ve got Social Media. Anyone can be famous now,’ she says casually. Our conversation meanders to lots of other topics. Burning issues of the day, but we skirt around the topic of harassment and Meesha Shafi and Ali Zafar. We both somehow know we’d be on the same page. I ask her whether a man has ever disrespected her. ‘Oh, God, no!’ she says. ‘That is when I will never shut up. There is just one incident that happened — a prominent person at a serial recording, he stared at me a lot. I didn’t go back to the shoot and called the production house to tell them that if the man didn’t improve his ugly stares, it would be difficult to work. The producers took care of it and thank God, no one has been disrespectful after that.’ 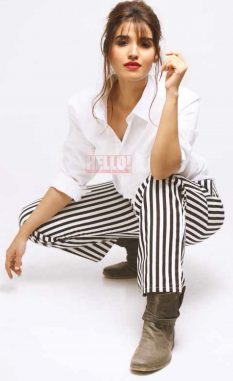 Managing relationships with the opposite sex is a challenge for women across the board in Pakistan. Hareem is no exception. ‘Professionally, I draw a line. Personally, if we click and make friends, then alright. But on set, if I’m meeting you for work, there is a line. One needs to have good respect for each other. So far, I have been very lucky with my costars. Either we are very good friends, or we share mutual respect for each other’s work. It

becomes easier.’ She continues: ‘Sometimes on set, you form great chemistry. You may not even know your co-actor. This happened with Shaz Khan in Dobara Phir Se. We clicked instantly. It was an actor to actor connection and that is one of the best kinds to have.’ 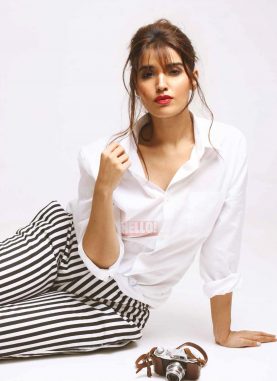 As we chat and down cups of tea, we land up on the topic of religion. ‘It’s a personal matter,’ she says and I agree. ‘What matters most is what you do for humanity, people around you, how you treat them. If someone criticises me on this, I will first ask them what they have done for others. And ask them where it is written that you can point an accusing finger at someone!’ It makes complete sense when she says: ‘My point is that everyone has their own boundaries — as a person you have limitations and your own instinct and gut. There are certain things I don’t want to do, but there are certain things that I don’t consider wrong — am I harming anyone, either a human being or another living creature. If I am not, then yes, I will do it.’

It is evident that Hareem’s parents have raised a smart daughter. And on the topic of her parents she is full of pride and love. She admires them for their intelligence — both are doctors; her mother a dermatologist and father a public health PhD and international consultant. She is grateful for the trust they have given her, and she is appreciative of their role in empowering her as an independent woman. But the best thing is that besides being smart, Hareem is also beautiful! For surely, beauty is not skin deep in her case — it goes beyond the immediately visible. It is within. That makes her

a great choice for a brand ambassador. 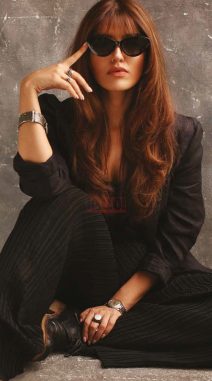 As our gorgeous Islamabad afternoon comes to an end — the weather outside is cloudy with a few on and off showers, and a cool wind blowing — Hareem’s phone starts ringing off the hook. Several people call her and she is responsible to all of them for some task or the other she has to get done! ‘My life these days,’ she laughs! ‘Fame is super temporary,’ she repeats again. We both nod and agree. ‘Be faithful and honest to your work, enjoy and respect it. Be grateful for what’s been given to you — and always, always be mindful of yourself — don’t emulate others or see what they have, focus on what you are doing.’ So true! Good luck Hareem. You are definitely a total package — a woman with strength, independence, intelligence, beauty, courage, kindness and humility balanced with self confidence. Continue to inspire! 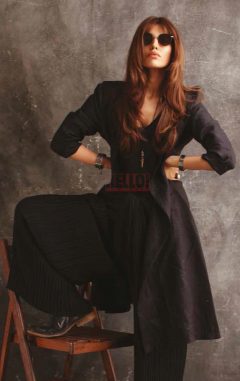 Hareem Farooq Shares the Secret to Her Success!

Hareem Farooq is All Set For Her Next Film, 'Parchee'

Half Hour With Hareem Farooq