ZAVIYAR EJAZ ON THE PATH TO STARDOM 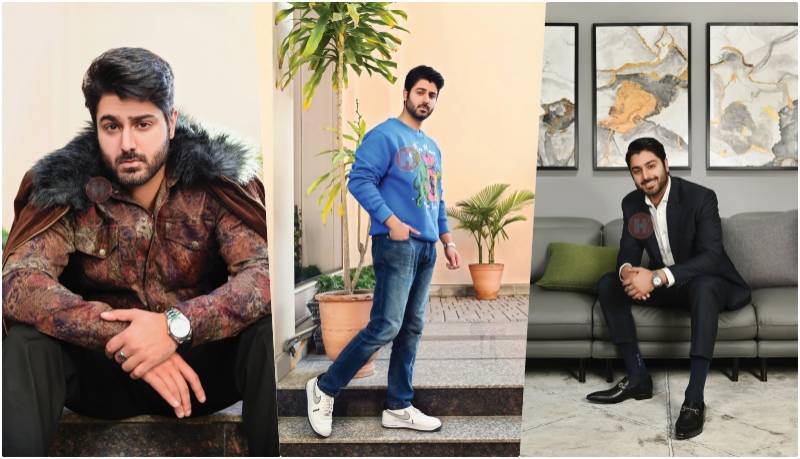 Zaviyar announced his arrival in Pakistan’s entertainment industry with a dignified identity, that of Naumaan Ejaz’s son. But, with his first two dramas themselves Zaviyar proved that he can stand firm in this industry without his father’s identity. Such is his conviction as an actor, with just two dramas to his name so far, Zaviyar ascended on his calibre and range as an actor. He is now preparing for h i s r e i g n o v e r P a k i s t a n ’s entertainment industry. Within no time Zaviyar has become the heartthrob among youngsters with his dashing style and charismatic persona. His character 'Hikmat' in the drama Sang-e-Mah is quite different from 'Mehran' in Qissa Meharbano Ka which shows his flexibility as an actor already. Zaviyar doesn’t want to allow himself to get typified as an actor as he continues to select his characters intelligently. We spoke to this young, talented actor who has acting in his genes, at his hometown in Lahore as he impressed us with his quick wit, intelligent responses and focused approach. Read on...

Hello Zaviyar! Pleasure to have you. Being born to a father who’s a legendary actor, was acting always your passion or you had other plans for yourself?

Pleasure to be here, Sundus. Well, I was always passionate about wanting to act, but I wouldn’t say acting was always my passion. My father did shield me from this life sometimes. It wasn’t always a given that I was going to act, but it has always been one of my deepest desires. I vividly remember the day that pushed me toward this career: I was walking outside my university’s performing arts building, and was immensely stressed out because of my exams. I was not the only one, literally everyone I saw had a frown or signs of worry on their faces. It was here that I saw a bunch of media and theatre students walk out of the building. They were laughing and this struck me as very unique. How could these people be so joyful and stress free in exam season? They were carrying cameras, lights and shooting equipment, nothing special - but you could see they were genuinely enjoying it. Witnessing this made me want to take a look inside that life. We soon opened a restaurant in Canada and had a media team come in to take the family’s interviews. That was the first time I ever sat off and talked, it was a beautiful moment - I didn’t want to get up!

These two welcoming experiences made it easy for me to come to the decision of pursuing acting as a profession.

While it’s a great honour to constantly be compared to your father Naumaan Ejaz especially due to the uncanny resemblance, it also comes with a lot of pressure. How do you deal with it?

The way I see it, pressure can either make you or break you. It does not bother me much, I want to forge my own path, make my own space. I want to be known as Zaviyar Naumaan Ejaz rather than Naumaan Ejaz’s son.

You’ve recently made your debut and both your dramas and currently on-air. Both big budget dramas with biggest stars of the country - do you think you got the perfect start to your career, a beginning an actor dreams of?

I can’t say much about what other actors dream of, but I could not have imagined such an incredible beginning to my career. Alhamdulillah, I will always be grateful for it.

Both Qissa Meharbano Ka and Sang-e-Mah have plenty of seasoned actors, how do you hold your own in such a diverse ensemble cast?

I am very fortunate and lucky to have worked with actors and actresses that uplift the entire production, including my own acting abilities. I am grateful to HUM TV and Momina Duraid Productions for giving me such a big opportunity to work with such seasoned actors. I have learned so much from them, more than I can say in a short conversation. And baaki I just try to do my best at my job. 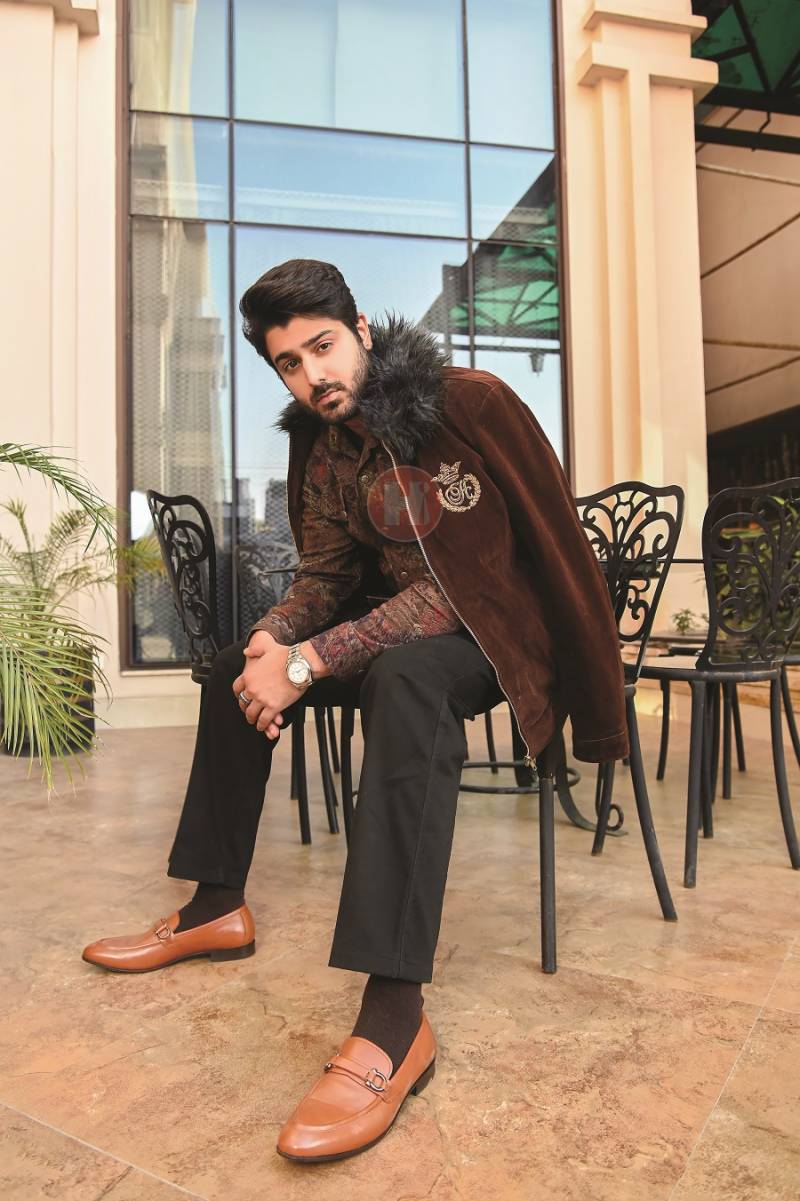 ‘It wasn’t always a given that I was going to act, but it has always been one of my deepest desires’

What were your initial thoughts when the script came along for your debut drama Qissa Meherbano ka? How much of Mehran’s character do you personally relate to?

Qissa Meherbano Ka was my first role. When the script came along, I didn’t question it too much. I was just happy for the chance. As for 'Mehran', his character has aspects that I think many would find relatable, but in all honesty, I did not personally relate to him.

How was the experience of sharing screen with your father in Sang-e-Mah? How did you find him on-set and what’s the best piece of advice he gave you?

The honour of a lifetime. To share the screen with my father? I cannot tell you how much it meant to me. The experience itself was something I will keep close to me forever. On-set, he was as professional as ever, we were co-actors on set not father and son. The experience just like that of other actors who have worked opposite him was surreal as well as nerve-racking. As far as advice is concerned I wouldn’t have been able to be here without his teachings. And while he encourages me to make independent decisions, his guidance has a major impact on my judgments. I wouldn’t say the tips he gives me fall under acting but he says to be a good actor one needs to be a good human being. Acting requires freedom, inner freedom that allows you to bring out what you have inside, freedom of voice/movement where you don’t protect yourself and are able to let go.

You’re the new-found ‘crush’ post your enactment of 'Mehran' and now ‘Hikmat’. How are you dealing with all the adulation?

(Laughs) I wouldn’t say I am the new found crush, our industry has so so many good looking guys but I guess I know how to manage these things pretty well.

‘As for Mehran, his character has aspects that I think many would find relatable, but in all honesty, I did not personally relate to him’

As an actor, it’s so easy to be cut off from reality. What do you do to remain connected?

My friends and my family, I’m always in touch with them. They keep me connected to reality. I also watch the news every now and then, but I stay away from the 24/7 news cycle, it can be toxic.

Apart from your father, who’s your favourite actor whom you’d love to share screen space with? Any actors you see as competition?

I don’t think it’ll be fair to name just one actor, there are so many names I could list. I know it’ll sound cliché but I don’t see anyone else but myself as my competition. I’m not the type to get into this mental race with people.

Are there any particular roles/ characters that you want to stick to or are you open to anything as long as you get to act?

I don’t want to be one of those actors that gets typecast and identified with a specific character. I am open to anything that can leave an impact and anything that stands out and is different because at the end of the day getting out of your comfort zone and taking on challenges is what acting is all about.

We have seen an influx of digital content platforms (like Netflix) in recent times but rarely do we see Pakistani content making it to these major apps which has helped many other countries to go global. Where do we lack? Do you see that changing anytime soon?

Funding and support. If you want the industry to go global, you need to give it the means to make it global. It is massively underfunded which is a shame because we have so much talent in this country. We as a nation also need to own our stars and uplift them. It’s very unfortunate that a foreign work stamp is what makes you a star in this country rather than the years of work and service you give here. It’s time we as a nation own upto our stars, uplift our own people and support them. We have nobody but us and if we can unite, the sky’s the limit.

‘I wouldn’t say I am the new found crush, our industry has so so many good looking guys but I guess I know how to manage these things pretty well’

What’s next for Zaviyar Ejaz?

There’s a saying that goes like this: ‘Make plans and God laughs’. I believe that you shouldn’t talk about your plans, but show results instead. It’s not that I’m not ambitious, I’m living in the moment and making the most of everyday rather than stressing about the future or dwelling over the past. I intend to actively pursue my career in acting but I don’t want to restrict myself by building a very detailed plan around it. Why don’t you guys come back to me after a few years and see what’s up but till then do remember me in your prayers. 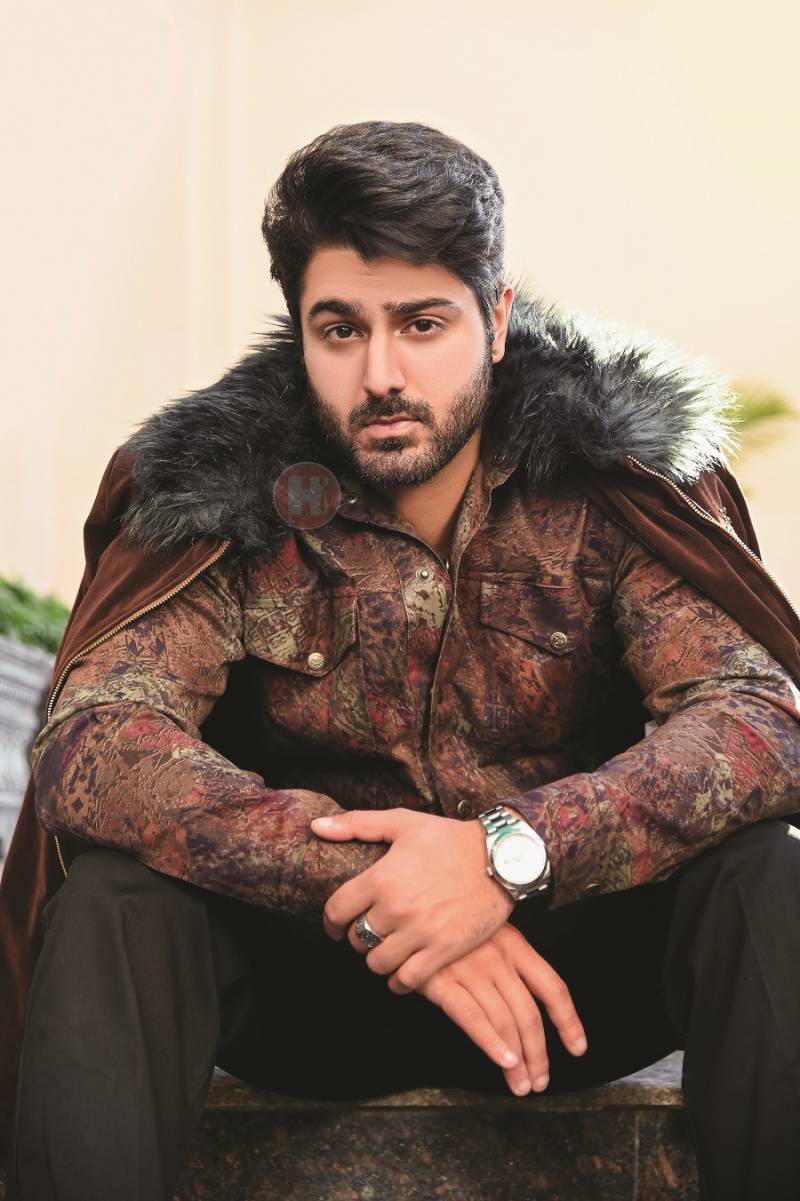 ‘I don’t see anyone else but myself as my competition. I’m not the type to get into this mental race with people’

That’s a tough one, I love music it wouldn’t be fair to pick just one at the moment, I have a lot of favourite songs

How would you describe your personal style?

What’s the weirdest thing a fan has ever done for you?

Nothing weird has happened so far

Who is your celebrity crush?

May be hard to believe but nobody ATM

What is your biggest fear?

What’s your one biggest pet peeve?

People turning on the road without signalling or even looking

What is your favourite movie quote?

It’s hard to close one favourite because favourites keep changing with time but I do have one at the moment from a book and it goes ‘Nothing out there will ever satisfy you except temporarily and superficially, but you may need to experience many disillusionments before you realise that truth’

Three things that impress you in a woman?

What does a perfect date night look like for you?

If you could trade lives with anyone for a day who would it be?

CANDID AND CONVIVIAL TAN FRANCE ON IDENTITY, STARDOM, AND BEING TRUE ...

SISTER DUO JAHAN & YASMINE OF KREWELLA ON IDENTITY, STARDOM & BEING ...